After the battles, a fight for Tal Afar 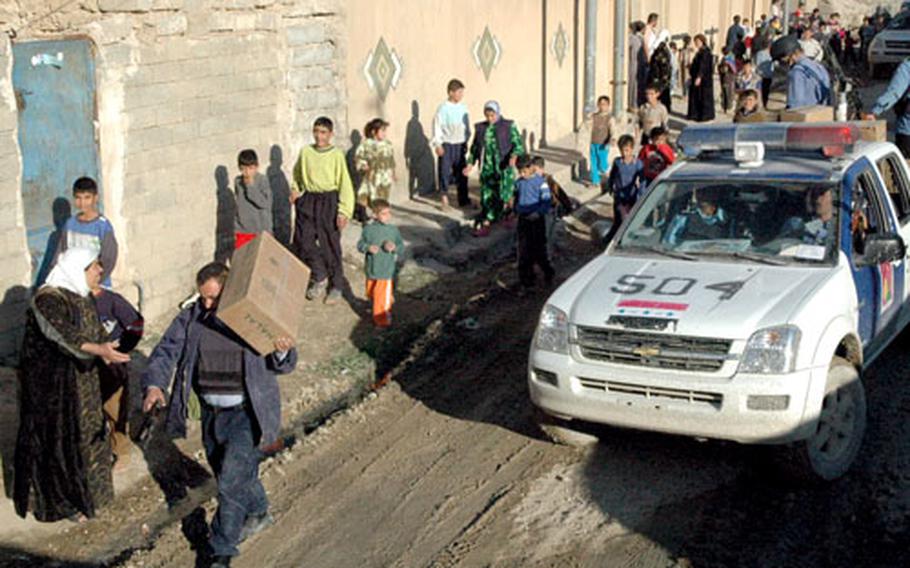 Iraqi police in Tal Afar distribute food and other items offered by U.S. forces as a means of strengthening bonds between local residents and Iraqi security forces recently. The town in northwestern Iraq is being using as an example of the U.S. military’s “oil-spot strategy” of “clear, hold and build.” (Monte Morin / S&S)

Iraqi police in Tal Afar distribute food and other items offered by U.S. forces as a means of strengthening bonds between local residents and Iraqi security forces recently. The town in northwestern Iraq is being using as an example of the U.S. military’s “oil-spot strategy” of “clear, hold and build.” (Monte Morin / S&S) 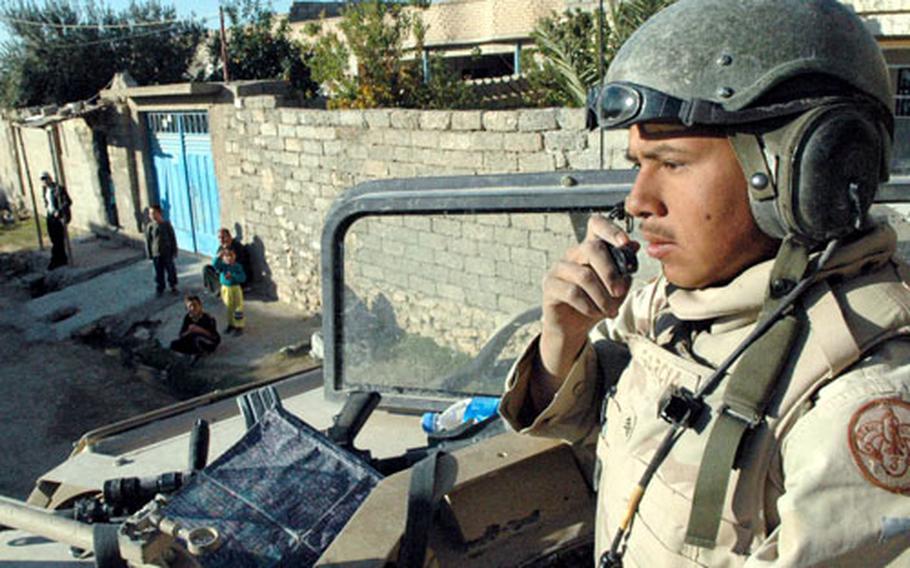 A soldier in the 3rd Armored Cavalry Regiment patrols the streets of Tal Afar in a Bradley fighting vehicle recently. (Monte Morin / S&S) 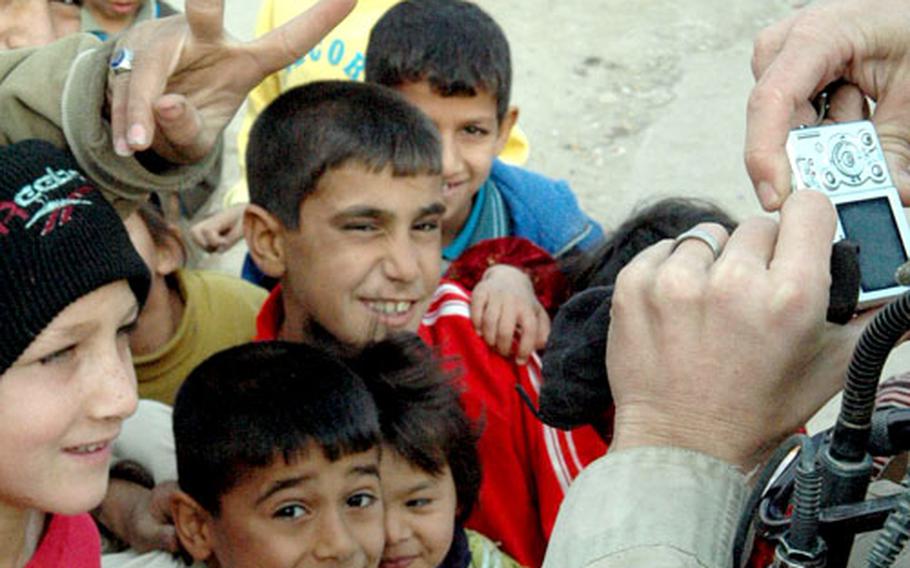 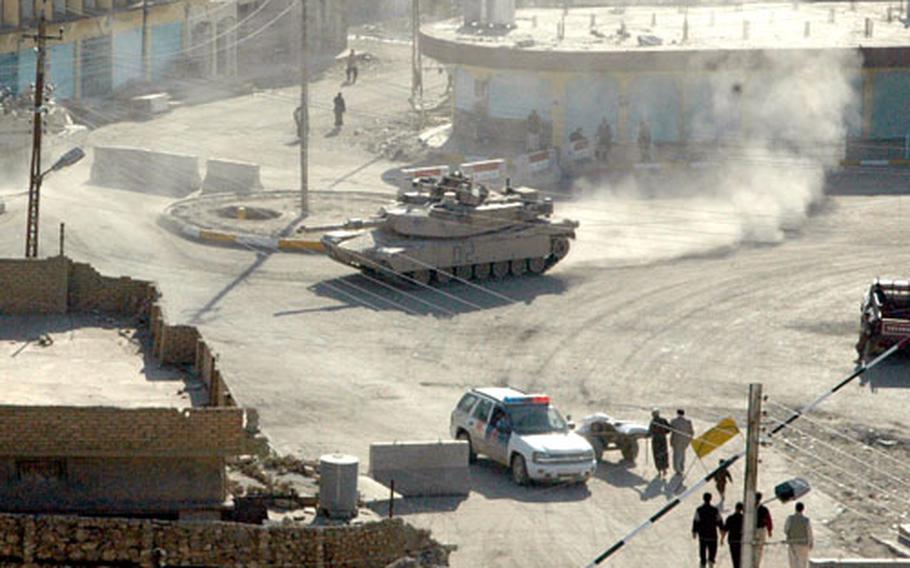 TAL AFAR, Iraq &#8212; In a region conquered and shaped by a succession of history&#8217;s most fearsome armies, this centuries-old city was fast becoming an example of how not to fight a modern- day insurgency.

After a sputtering offensive well over a year ago that left few U.S. troops in place to keep the peace, Tal Afar, in northwestern Iraq, soon emerged as a haven for Muslim extremists and Baath Party loyalists who held sway through a campaign of kidnappings, beheadings and assassinations.

The chaos touched off long-simmering tensions between rival tribes and religious groups, and much of the local police force fled. Those officers who remained degenerated into a sectarian hit squad. Residents feared leaving their homes as insurgents operated with near impunity. Training camps were established to teach bomb construction and guerrilla tactics.

Suicide bombers were dispatched to all areas of northwest Iraq.

Today, Tal Afar is a very different and, at least for now, a far more peaceful place. Residents greet U.S. soldiers with smiles and waves, and, in the most significant indication yet of progress here, more than a quarter-million residents in the region turned out for a largely peaceful Dec. 15 parliamentary election.

In the wake of a second, September offensive &#8212; the largest such operation conducted in 2005 &#8212; Tal Afar is being held up as a model for fighting the insurgency and America&#8217;s eventual withdrawal from the war-torn nation. Conducted by the 3rd ACR and the 3rd Iraqi Army Division, Operation Restoring Rights marked the largest example to date of the Bush administration&#8217;s &#8220;clear, hold and build,&#8221; strategy for fighting the insurgency.

While past U.S. offensives have focused primarily on capturing and killing insurgents in periodic, widespread sweeps &#8212; only to have the process repeated months later when insurgents return &#8212; commanders in Tal Afar have sought to keep the peace by maintaining a strong and visible presence within the city.

But even more significantly, commanders say, they have closely incorporated Iraqi army and Iraqi police units into their efforts, and have spent significant time and resources in rebuilding the city&#8217;s municipal infrastructure and public institutions.

The approach was based in part on lessons learned from the first offensive, Operation Black Typhoon, which occurred exactly one year earlier. It also parallels an approach dubbed &#8220;the oil-spot strategy,&#8221; which has gained popularity among some lawmakers and policy wonks in Washington.

That strategy, which has been espoused by Andrew F. Krepinevich Jr., director of the Center for Strategic and Budgetary Assessments, recommends that U.S. forces concentrate on providing security and economic opportunity to Iraqis in key cities, and thereby deny the insurgents popular support. In Krepinevich&#8217;s view, this security and control will spread from the key centers to outlying areas, like a drop of oil spreads on water or paper.

The strategy comes with a price, however. Krepinevich wrote in the journal Foreign Affairs that it will require a protracted commitment of U.S. resources, will risk more U.S. casualties in the short term, and will require an enduring U.S. presence in Iraq, albeit with far fewer troops.

While U.S. commanders say the plan for Tal Afar was arrived at independently of the oil-spot strategy, they do say they hope their success in Tal Afar will spread. For soldiers in the 3rd ACR, one critical barometer of change has been a drop in the frequency of insurgent attacks and an increase in information provided by residents on insurgent activities.

According to Kennedy, U.S. and Iraqi forces experienced more than five episodes of enemy contact a day prior to the operation. Now, that figure is down to two. The complexity of the attacks has fallen remarkably, too.

Commanders have reported similar successes in other Iraqi cities where serious efforts have been made to beef up Iraqi army and Iraqi police units. In Mosul and Baghdad, two of the cities that Krepinevich has cited as key areas to focus on, U.S. military commanders say insurgent attacks have declined in the last several months.

And, in Iraq&#8217;s restive and wild west, U.S. troops are rushing to construct new Iraqi military bases following a series of raids on insurgent positions along the Euphrates River corridor.

However, commanders also say that the oil spot approach is not a cure-all, and that it fails to take into account the complexity of Iraqi tribal culture and it&#8217;s fragile infrastructure.

Lt. Gen. John Vines, who until last month was the No. 2 general in Iraq, offered this criticism of the theory to U.S. News & World Report recently:

&#8220;A concept of controlling a few areas and leaving the rest to the predations of terrorists oversimplifies the problem,&#8221; Vines was quoted as saying. &#8220;It doesn&#8217;t take into account enemy intent. It allows sanctuaries to develop and strategic resources to be interdicted.&#8221;

An obvious fault, Vines and others say, is that such a policy would leave Iraq&#8217;s oil pipelines even more vulnerable to attack as they snake farther away from heavily fortified urban centers. The oil-spot theory was developed for Vietnam, a far more agricultural region.

Efforts at bolstering Iraqi security forces in the west have also met with setbacks. In Ramadi, a highly touted Iraqi police recruiting drive suffered a devastating suicide attack that killed between 30 and 80 recruits, as well as two U.S. servicemembers and appears to have triggered a cycle of attacks between local Baath Party loyalists and Islamic militants from outside Iraq.

Officers who participated in the effort to clear Tal Afar of insurgents note that an unknown number of fighters escaped to outlying areas and are likely resting up for what could be another surge in attacks. As the 3rd ACR prepares to end its deployment in the coming weeks and return to the United States, soldiers with the 1st Armored Division are scheduled to replace them, and could find themselves in a very different environment.

&#8220;Our job should be to clear and hold and allow the Iraqi security forces to take root,&#8221; said Capt. Gregory Mitchell, a tank company commander with the 3rd ACR. &#8220;Every unit that comes in wants to be the heroes. They want to be the ones to clean up the city. What they don&#8217;t realize is a whole new set of insurgents is coming in. There is no decisive battle, no cordon-and-search operation that will solve everything. All we can do is shape the battle space for the Iraqi security forces.&#8221;