After surviving the Taliban, Afghan translator killed by wrong-way driver in California 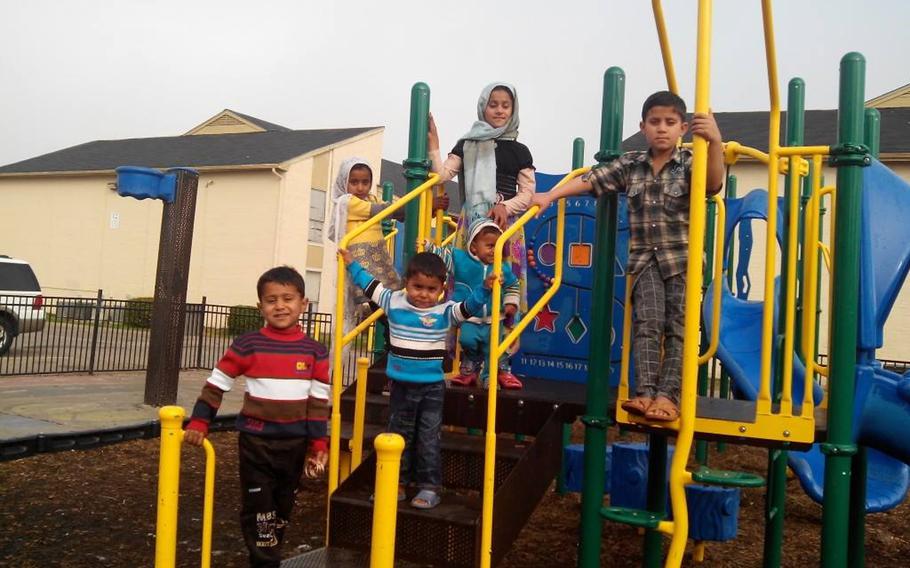 Six of Waheed Etimad's children are pictured here on a playground in Houston in a photo posted to Facebook on Jan. 29, 2015, shortly after the family immigrated from Afghanistan. (Waheed Etimad/Facebook)

Six of Waheed Etimad's children are pictured here on a playground in Houston in a photo posted to Facebook on Jan. 29, 2015, shortly after the family immigrated from Afghanistan. (Waheed Etimad/Facebook) 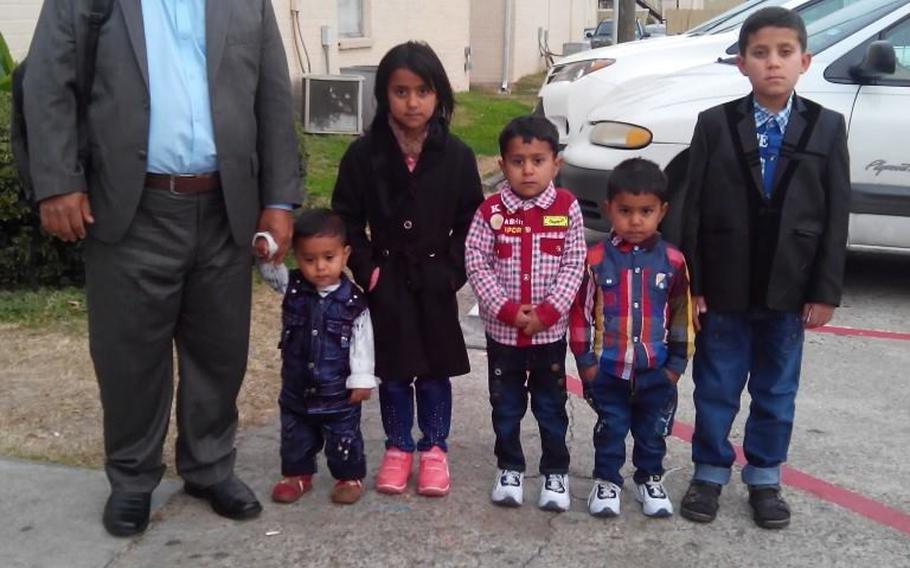 Waheed Etimad and five of his children are pictured here in Houston before going to get Social Security cards, according to a Facebook post on Jan. 31, 2015, shortly after the family immigrated from Afghanistan. (Waheed Etimad/Facebook) 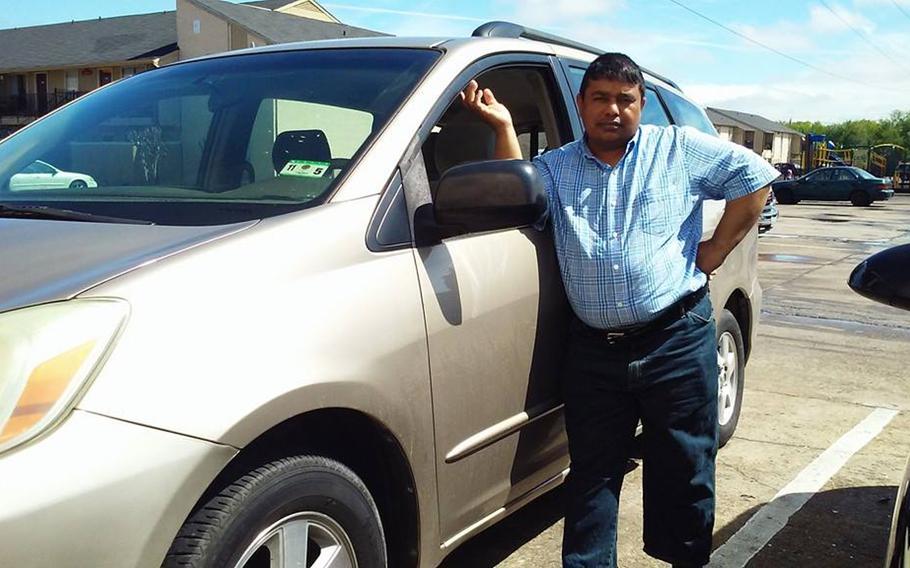 Waheed Etimad is pictured here with a minivan in a photo posted to his Facebook page on March 18, 2015, a few months after the former contract translator and his family immigrated to the United States from Afghanistan, where his work helped the Army and the Drug Enforcement Administration, former colleagues said. (Waheed Etimad/Facebook) 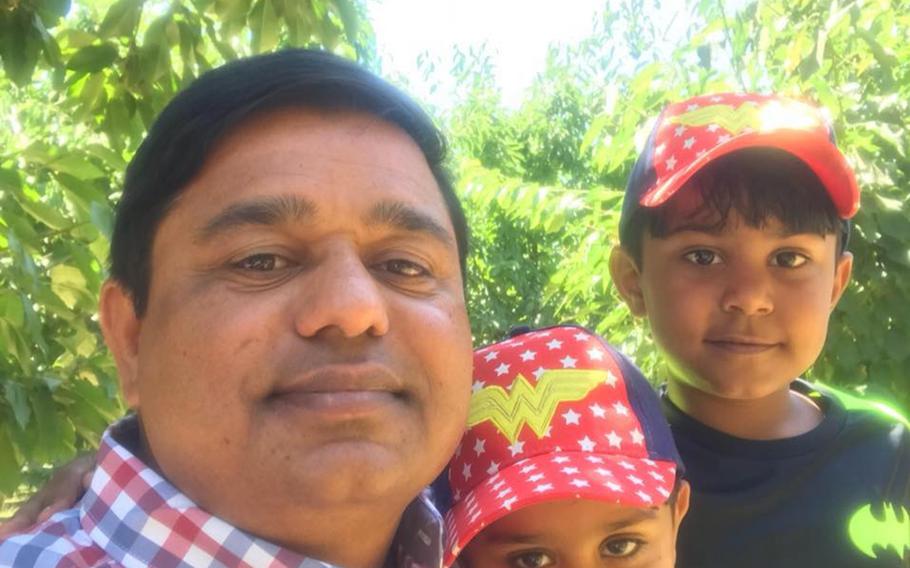 Waheed Etimad is pictured here with two of his seven children in a photo posted to his Facebook page on June 26, 2018. (Waheed Etimad/Facebook)

A father of seven killed in a head-on crash in San Francisco last week had worked as a translator for U.S. troops and counternarcotics teams in Afghanistan, former supervisors said this week.

Waheed Etimad, 40, immigrated to the U.S. four years ago with his family on a special immigrant visa to “make a good life for his children,” said Fadel Rabi Qais in Afghanistan, who said he was his former supervisor.

They settled in Concord, Calif., on the east side of the Bay Area, a region popular with Afghan immigrants. Etimad began taking college courses, seeking to become a computer engineer, and worked full time at night as an Uber driver.

It was while driving for Uber in the early morning hours of Feb. 3 that he was killed, after a sedan driving south in the northbound lanes of Highway 101 crashed into two other cars and then plowed into Etimad’s minivan, which was carrying six passengers. One of those passengers was taken to a hospital with serious injuries. Eight others were also injured in the incident.

The sedan driver, identified by officials as Kayla Wilson, 21, of San Jose, was also killed in the crash. The California Highway Patrol said last week it was investigating whether Wilson was under the influence of drugs or alcohol, The Associated Press reported. Local media reported that CHP believed she may have also crashed into a building before entering the highway.

Days after the deadly crash, family and friends gathered at a local cemetery to mourn and pray for Etimad.

“I’m going to miss my dad for a long time,” his 13-year-old son, Yahya Etimad, told San Francisco’s ABC 7 News at the funeral, calling his father his hero. “We all miss him so much.”

Waheed Etimad’s work in Afghanistan included translating on contracts for the U.S. Army and the Drug Enforcement Administration at the U.S. Embassy in Kabul, said Ahmad Nowshirwani, another former supervisor, who now lives in Virginia. That work helped Afghan police arrest many drug traffickers and seize tons of drugs, he said.

“He was my smartest linguist,” Nowshirwani said. “Our direct U.S. supervisor … was always bringing examples of his work and dedication.”

On one operation, while working with U.S. troops in eastern Afghanistan, Etimad was shot by the Taliban and had to be medically evacuated to Bagram Air Field for treatment, Nowshirwani said. Etimad’s son also spoke of his father getting shot, though it’s unclear when the shooting happened.

Neither the U.S.-led mission nor the embassy in Kabul could confirm Etimad’s work. FedSys, Inc., who he claimed was his former employer on Facebook and who both Nowshirwani and Qais said they worked for, declined to comment and said it could not “confirm and/or deny” his employment without his signed consent.

But the Taliban knew that he worked for the Americans, Yahya Etimad told KPIX 5 in San Francisco. “There was a lot of Taliban,” he said.

After settling in the Bay Area, Etimad had struggled to adjust to life in the U.S. and to provide for his family, Nowshirwani said.

“He had a really hard time,” he said. “This was the saddest part of his tragedy.”

But since the crash, there’s been an outpouring of support for the family, both online and in the local Muslim community.

The children, ranging in age from 2 to 16, have no relatives living in the U.S. other than their mother, Qais said. As is typical for Afghan families, she didn’t work outside the home, he said. She also doesn’t speak English and doesn’t know how to drive, Yahya Etimad told KRON 4 News.

Friends were seeking a way to get a visa for a family member to travel from Afghanistan to come help the family, Qais said. A local Muslim leader called on lawmakers for help in a televised report.

Meanwhile, a friend set up a GoFundMe campaign to pay for funeral expenses and more, which quickly exceeded its initial $99,000 goal and has now surpassed $300,000 in pledges.

The center plans to continue collecting donations through Saturday and has offered to pay the family’s $2,000 monthly rent for one year, as well as providing a replacement minivan.

“The MCC is coordinating critical legal and financial counseling assistance for the family … to make sure the family is protected and that they are able to leverage the trending crowdfunding to the long-term benefit of the household,” the post said.