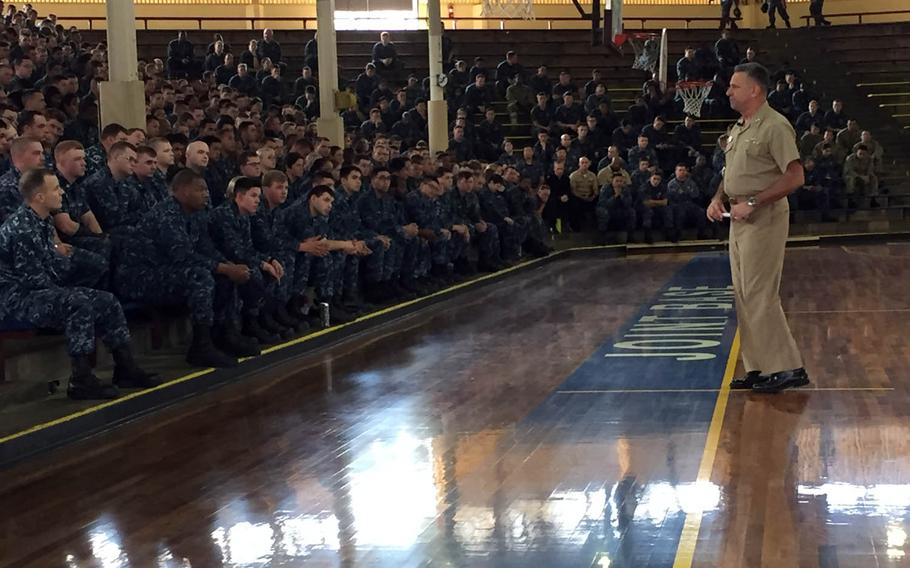 JOINT BASE PEARL HARBOR-HICKAM, Hawaii — The Navy has backed off on a controversial decision to scrap job-oriented titles, but the effort to reform how those jobs are attained and offered is moving forward, a top Navy official said Tuesday.

“Now that we’ve got the distraction of the naming issue put aside, we’re focusing on things of substance that we wanted to tackle — the rating modernization — as well as Sailor 2025,” Vice Adm. Robert Burke, chief of Naval Personnel, told a media roundtable in Hawaii.

Sailor 2025, an overhaul of the Navy’s personnel system, is intended to modernize policies, operating systems and training.

The service announced in September it would end the 2-century-old job-ratings system that identifies sailors by occupation and rank, though many vehemently opposed the change.

“Our sailors have many allegiances,” Burke said of the backlash. “They have allegiance to their ships, to their warfare designations, to their squadrons and to their tribe. Ratings are another tribe, and there’s tradition associated with it. I think there’s that aspect of it.”

“We fundamentally haven’t changed our personnel system since the draft went away [44 years ago],” Burke said.

The Navy oversees a massive and sprawling personnel pool, with roughly 40,000 sailors entering the service each year and the same number heading out. There are about 90,000 annual permanent-change-of-station moves for operational and rotational tours alone, he said.

The Navy is hoping to attract and retain sailors through the modernization effort designed to reduce the cost and toll of turnover.

Part of that reform is aimed at increasing flexibility so sailors don’t find themselves at career dead ends. Too many “proven performers” aren’t promoted because their job specialties are “over-manned,” he said.

The modernization would create more flexibility by managing personnel by career tracks. For example, a dental technician could qualify to be an X-ray technician after an additional month of schooling, Burke said.

The Navy is working on identifying and categorizing similar jobs.

“That’s what the rating modernization is about: identifying that DNA that defines that career track he’s in and looking at the differences for the DNA that’s required to do different jobs and just training them on those different elements,” he said. “That’s the goal.”

Burke said the sailors he’s talked to have liked the proposal to change the way advancement exams are structured. For example, he said there are 40 classifications within the corpsman rating that run the gamut from dental and X-ray technician to mortician and aerospace medical technician.

A corpsman is tested on all 40 classifications when taking an advancement exam, Burke said. A worthy goal would be to advance sailors based on testing of their individual skill sets rather than the “the whole larger set,” he added.

However, increased job flexibility as the norm could cause the Navy to revisit the naming issue, he said.

“For example, if you come in as a cryptologic technician and you later become an electronics technician, what do we call you?” he said.

During an all-hands call Monday at Joint Base Pearl Harbor-Hickam, several sailors suggested that the first rating a sailor assumes in the Navy will be “for life,” Burke said.

“We’ll get the sailors’ ideas on it and bring them to bear on what we call each other,” he said. “We can cross that bridge later.”