After planned cuts, some fear Afghans could become willing recruits for insurgent groups 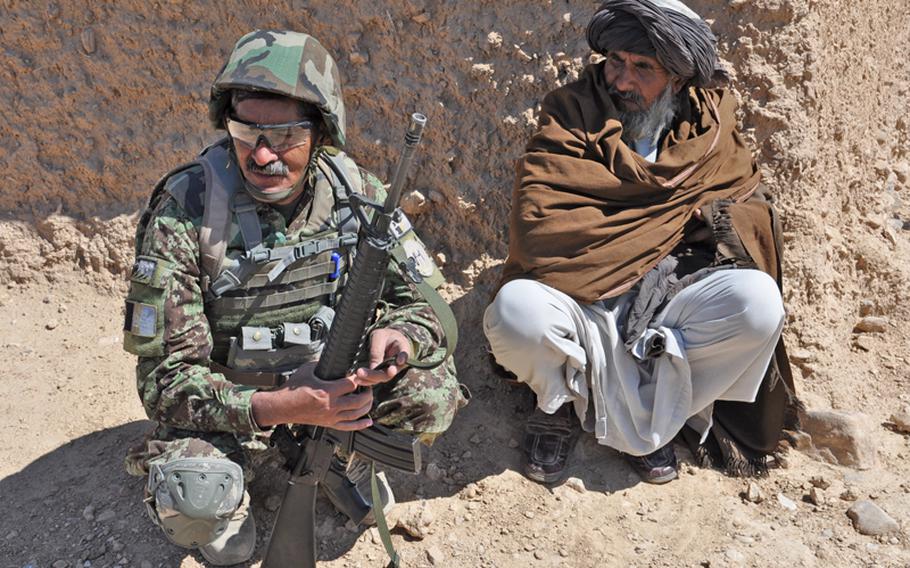 Buy Photo
An Afghan soldier crouches with a villager in Kandahar province in April. Plans to reduce the Afghan national security forces by one-third have some worried that putting so many military-trained men out of work could be a boon for insurgent recruitment. (Heath Druzin/Stars and Stripes)

Buy Photo
An Afghan soldier crouches with a villager in Kandahar province in April. Plans to reduce the Afghan national security forces by one-third have some worried that putting so many military-trained men out of work could be a boon for insurgent recruitment. (Heath Druzin/Stars and Stripes) 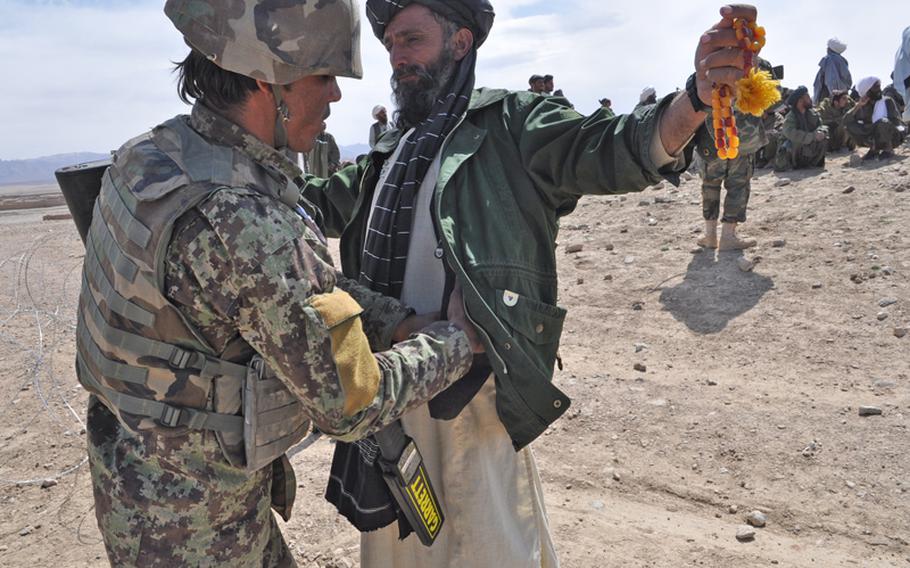 Buy Photo
An Afghan soldiers searches a man before a meeting in Kandahar province in April. The U.S. plans to cut the size of the Afghan national security forces by about 120,000 soldiers over the next five years, a move some worry could provide insurgents with recruits. (Heath Druzin/Stars and Stripes)

KABUL &mdash; In this country, where unemployment is rampant and the insurgency offers one of the few steady paychecks, the last thing anyone would advocate is a flood of military-trained, out-of-work young men. But that&rsquo;s what many fear will happen over the next few years, with planned military cuts potentially putting more than 100,000 Afghan troops out of work.

The Afghan National Security Forces, entirely funded by the international community, is near its goal of about 350,000 troops, but that is slated to drop to fewer than 230,000 by the end of 2017 as international money begins to dry up.

A 2008 survey estimated the unemployment rate at 35 percent, down from 40 percent in 2005, according to CIA World Factbook. At least some of that drop can be attributed to the work found with coalition forces &mdash; a trend likely to reverse itself. Current unemployment statistics are hard to come by, though some Afghan experts believe the rate now is higher.

If you&rsquo;re an out-of-work man with weapons training, there&rsquo;s one clear path to employment.

&ldquo;Obviously, they will go to find jobs, and the job market for them is the armed opposition,&rdquo; said Hamidullah Farooqi, an economics professor at Kabul University and the former minister of transportation and aviation.

Insurgent groups such as the Taliban and Haqqani network have proved adept at recruiting within the ranks of the Afghan National Security Forces, as evidenced by a rash of attacks in which Afghan troops or those in Afghan uniforms have turned their weapons on international soldiers. Such attacks &mdash; many blamed on insurgent infiltration &mdash; account for 15 percent of coalition casualties this year.

The Afghans have very little control over the numbers of their security forces; foreign money dictates how many troops can be supported.

Naqibullah, a retired Afghan army brigadier general who serves as a member of parliament, said the Afghan military has failed to instill any sense of national pride in its fighting force, which will leave soldiers especially vulnerable after they leave the military ranks.

&ldquo;They still fight for money, not to take care of their country,&rdquo; he said.

Rural Afghans especially will be recruited by insurgents, said Naqibullah who, like many Afghans, goes by one name.

&ldquo;There are no jobs in the rural provinces,&rdquo; he said. &ldquo;They will have to go abroad for work or join the insurgency to make a living.&rdquo;

Everyone agrees that employment for the troops who lose their jobs should be a priority, but no one with the international military coalition or the Afghan security forces interviewed could offer concrete plans.

&ldquo;Either they should continue employing those people or they have to plan to create the environment for them to get back to the market and be employed,&rdquo; Farooqi said.&rdquo;

Officials with NATO&rsquo;s International Security Assistance Force declined to be interviewed. In an emailed statement, NATO spokeswoman Lt. j.g. Amy Hession said NATO&rsquo;s post-combat mission might include a transition program for Afghan soldiers, possibly including vocational training and job placement programs. Some of the reduction will take place through attrition, and Hession pointed to the current push to increase literacy among soldiers as a potential boon for their job prospects, though most programs bring soldiers to only a first-grade reading level.

&ldquo;Remembering the extent of the literacy training and other skills being conveyed to the (Afghan security forces), we believe the former members of the (security forces) will have far more options and less susceptibility to subsequent insurgent recruitment,&rdquo; she said.

&ldquo;If you decrease the numbers, it may cause some problems,&rdquo; said Najib Danish, spokesman for the Ministry of Interior, which oversees the Afghan National Police.

Brig. Gen. Dawlat Waziri, spokesman for the Ministry of Defense, which oversees the Afghan Army, was cautious in his assessment of any decrease.

&ldquo;It is still an idea that after 2014, the situation will be evaluated, we will see if the security situation is better, if the quality of the Afghan security forces is better, and if there is a chance to decrease, maybe there will be a decrease,&rdquo; he said.

Insurgents aren&rsquo;t the only armed groups who stand to benefit from an infusion of unemployed troops. Many in Afghanistan fear that once foreign troops leave, the country could see civil war along the lines of the devastating fighting in the early 1990s that left Kabul in ruins when rival militias swooped in to claim control of the country.

Remnants of many of those militias still operate in Afghanistan, and former Afghan National Security Forces troops could provide an easy source for reinforcements, said Thomas Ruttig, co-director of the Afghan Analysts Network.

Ruttig said militias are recruiting those who wash out while trying to join the military and that the new militiamen have been shaking down villagers.

&ldquo;This is about re-mobilized illegal armed groups, remnants from the fight against the Taliban and earlier phases of the civil war, who have tried to join the Afghan Local Police, did not make it through the vetting but continue to exist, now harassing the local population, &lsquo;taxing&rsquo; them, etc., to be able to survive,&rdquo; he said.

Any unemployment among veterans is likely to compound an already dire economic situation in Afghanistan.

Tent camps dot Kabul, full of destitute Afghans who have fled the violence-prone countryside or returned after years or decades in Pakistani refugee camps, and the government has struggled to create jobs. Pakistan is threatening to send back hundreds of thousands of Afghan refugees.

&ldquo;When the foreigners leave, there will be a lot of civilian unemployment,&rdquo; in addition to the soldiers, Naqibullah said. &ldquo;It will be chaos.&rdquo;