After Pacific tour, Navy’s No. 2 talks readiness, staying ahead of competition 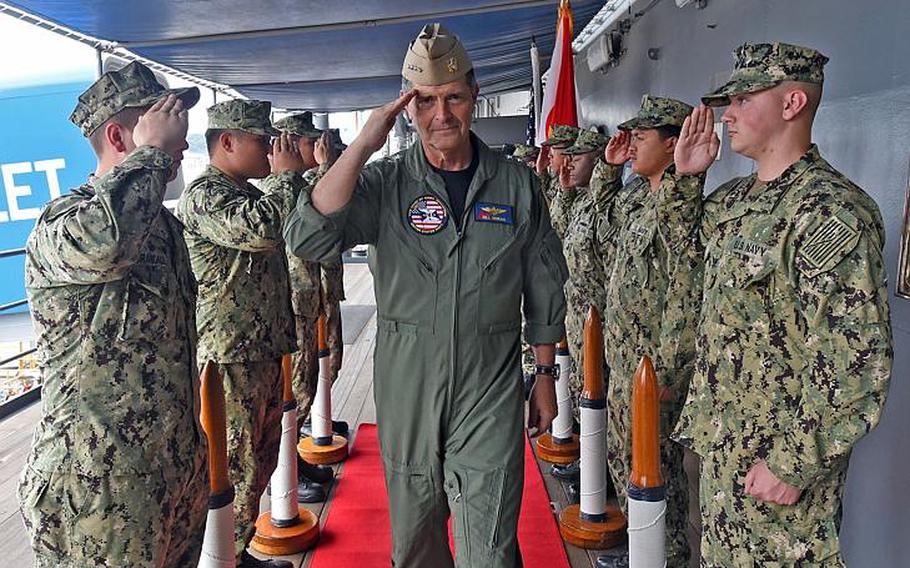 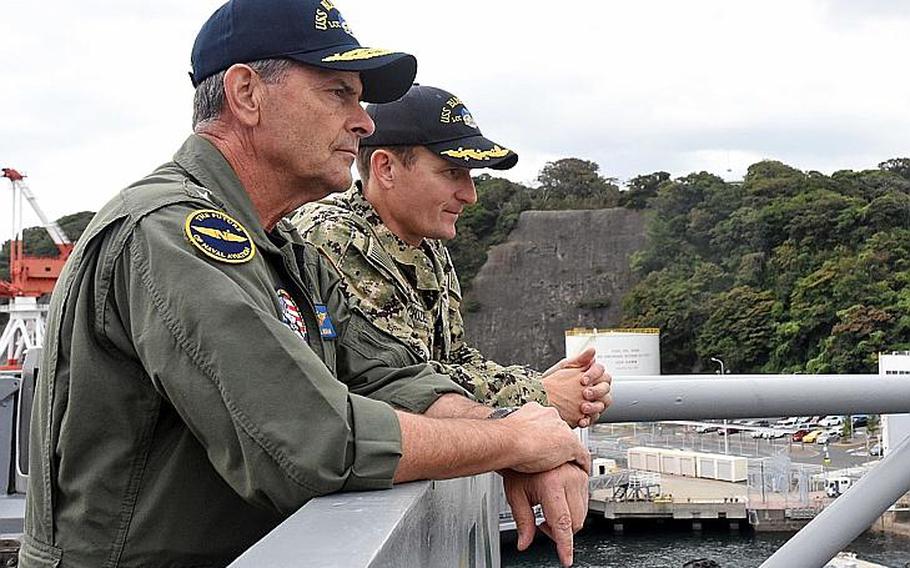 YOKOSUKA NAVAL BASE, Japan — Vice Chief of Naval Operations Adm. Bill Moran heard right from the source how the Navy’s largest foreign command is keeping up with readiness challenges, including a significant maintenance backlog and an ever-increasing competition landscape.

Moran — the service’s second-highest ranking officer — visited Navy bases in South Korea and Japan last week on a listening tour that he said brought helpful insight into on-the-ground operations in the Pacific.

“We in Washington have our own views about things and it’s largely programmatic in nature, budgetary in nature and some policy,” he told Stars and Stripes in an interview Thursday. “But to get feedback from sailors, commanding officers, chiefs and master chiefs in the fleet really helps us refine and make sure that we’re supporting from Washington what they need [in the Pacific].”

Readiness challenges At Yokosuka on Thursday, Moran spent time on the waterfront discussing ship maintenance. The base is home to U.S. Naval Ship Repair Facility Japan Regional Maintenance Center, which is working on what Moran called a “not insignificant” backlog. A request for exact numbers on that backlog went unanswered.

The 7th Fleet is operating with fewer ships than it had planned after two of its guided-missile destroyers — the USS Fitzgerald and the USS John S. McCain — were severely damaged in separate fatal collisions at sea last year.

Moran said the McCain, which is being repaired in Yokosuka, is expected to get out of drydock this fall and the Navy is aiming to have it underway in the spring. The Fitzgerald is undergoing maintenance in Pascagoula, Miss., and the service has said the goal is to return it to sea by 2020.

“Everybody recognizes that we’ve got to do the maintenance that’s built up over time. While that’s important to everybody, no one likes to be in the yards,” Moran said. “There’s a cost of doing that right now and we have to re-baseline the maintenance of our ships across the fleet, particularly [in the Pacific] because it is so active, it has been a very busy place for a long time.”

On Sept. 12, Moran and Master Chief Petty Officer of the Navy Russell Smith toured Yokosuka’s USS Blue Ridge, which has been undergoing maintenance for about two years. Crews first re-lit the boilers on the Navy’s oldest commissioned operational ship in June, and Moran said the 7th Fleet’s flagship is “about ready to go to sea.”

“She’s outfitted like an old ‘57 Chevy that we’ve took the engine out, took the dashboard out and put all modern capability in, and man, she sounds and she’s going to run kind of nice,” Moran said.

The Blue Ridge’s staff moved back onto the ship this summer.

Capt. Brett Crozier, the Blue Ridge’s commander, said it was an honor to host Moran.

“We’re always proud to show off the ship,” he said in a Navy statement. “We’re glad the VCNO and MCPON are able to see the ship after all the hard work the crew has put in to prepare us for a return to sea.”

After manning shortages and training and certification problems were determined to have contributed to last year’s fatal collisions, the Navy created a new unit — Naval Surface Group Western Pacific — to oversee the maintenance and training that 7th Fleet crews undergo before deployments.

“We are doing our best to find the balance between getting the maintenance done and ensuring that we’re getting out and operational,” Moran said.

While the new setup has received some criticism, Moran said he believes it will be better received over time.

“To some, it may seem like an added layer of bureaucracy; to others it may seem like an added layer of compliance. Actually, it’s designed to do neither,” Moran said. “It’s to cinch up some of the seams between those out here who are scheduling ships for operations and an organization that is designed to make sure that the maintenance is getting done and that the training, manning and equipping is properly provided to the ships at the right time early in their maintenance phase and post-maintenance or basic phase.”

Competitive waters Moran said he was encouraged by the questions he received from sailors across the Pacific during his visit. He said he believed they were indicative of sailors being “more and more aware of their purpose.”

“They’re asking about readiness to fight; being ready to go to sea to take on adversaries that might emerge in this part of the world; and being ready to answer the nation’s call, whatever that may be,” he said. “I’m getting great questions — questions on a strategic and operational level — not on a low-level tactical [regarding] uniforms and other things that tend to distract us from what’s important.”

That awareness is important as competition in the region grows, Moran said.

“There are plenty of competitors out here … Certainly we know about the Korean Peninsula, we know that China is pushing further and further out and competing for water-space resources,” he said.

The 7th Fleet regularly conducts freedom-of-navigation exercises in the South and East China Seas. China has been militarizing reclaimed land in the area, is involved in territorial disputes with other countries in the region and protests when they sail too close to certain islands.

“There are signs that our competitors around the globe — but particularly out in this area — are trying to change the international rule of order,” Moran said. “… We’ve got a lot of allies out here and a lot of partners out here who are looking at us to enforce what has been a very successful international order for trade, commerce, freedom, freedom of the seas, access to goods and services.

To stay ahead of the competition, Moran said the Navy must focus on its personnel development by “train[ing] better, smarter and frequent enough to build proficiency.”

He also said technology must “not only be defensive so that we can protect our assets, but also demonstrate that we have the punch and the ability to counterpunch somebody who might want to take us on.”

“At the end of the day, competitors are less likely to want to pick a fight with you if they are concerned about your strength, and so we need to continue to demonstrate that by being out here, by operating out here and having the technology to be able to counter anything that they might throw at us,” he said.

Team players While the Navy continues implementing its new training and maintenance programs to bolster readiness, Moran said a strength the service has now is its “people.”

“I’ll be perfectly frank with you, I thought as soon as the unemployment rate in the United States dropped below 4.1 percent, we would have a heck of a time retaining good sailors in our Navy, and the good news is that retention right now is very good,” he said.

Moran attributes that to programs that have rolled out recently to encourage re-enlistments.

“[We’re] more transparent about what opportunities are out there for them and then giving them every opportunity to stay Navy, especially those who are very talented,” he said.

For example, the Navy in March offered aviators bonuses of up to $90,000, depending on which aircraft they fly. In May, some sailors were offered preferential billet selection and guaranteed shore duty on their next tours if they took a one-year extension on tours in Japan, Guam and Spain. The service has also developed better technology for accessing career goals.

“I think a lot of that has to do with our approach to how we try retaining folks by modernizing the system by which they manage their careers, providing more opportunities for them [and] being more flexible in how they can execute a career,” Moran said.

Moran returned to Washington on Friday, missing planned visits out to the deployed aircraft carrier USS Ronald Reagan because of typhoons in the region.

He said he would take back to Washington the questions he heard from sailors and lessons he learned during his trip to Korea and Japan.

“It’s really important that … we answer to things that young men and women that serve in any capacity today expect from a high-end profession like the United States Navy,” Moran said.