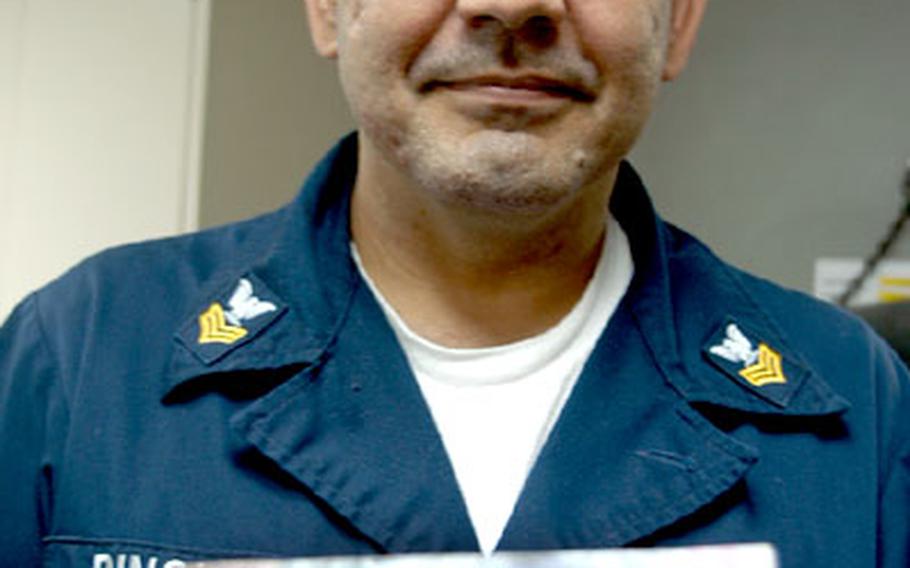 The captain of an Iraqi fishing vessel gave a signed dinar note to one of his escorts on the USS Gary, Petty Officer 1st Class Ricardo Pinolay, an operations specialist. The captain wrote “For Pinolay, friend.” (Kendra Helmer / S&S)

ABOARD THE USS GARY &#8212; The rescued Iraqi fishermen asked about the strange exercise equipment.

They had never seen an elliptical machine. They took turns testing it out, swinging their legs and arms simultaneously.

&#8220;They all started laughing. One couldn&#8217;t get it to stop,&#8221; said Petty Officer 1st Class Ricardo Pinolay, one of the escorts for the eight men making an unexpected four-day stay on the USS Gary.

U.S. sailors from the Yokosuka, Japan-based frigate rescued the Iraqis from their sinking trawler March 13 in the Persian Gulf.

The Gary crew set up eight cots for them in a classroom. The Iraqis, uninjured in the ordeal, traded their drenched clothes for blue coveralls and T-shirts, underwear and black flip-flops from the ship&#8217;s store.

Other than escorted smoke breaks, restroom trips and meals in the galley, the men stayed in the classroom, where the door was closed only during prayers. For meals, they especially enjoyed bread, fish, chicken, vegetables and chocolate chip cookies.

Sailors frequently stopped by, donating cigarettes and cookies. When the Iraqis saw sailors tidying the adjacent room, they asked for supplies and cleaned the classroom.

The fishing trawler&#8217;s captain spoke English well. The others understood enough to get by. Pinolay chatted with the captain about fishing and family.

The men, ranging in age from late 20s to mid-50s, never talked to the crew about Iraqi leader Saddam Hussein. A week later, the war started.

The fishermen posed for a photo, smiling and standing arm-in-arm with their rescuers. They thanked Pinolay before they transferred to another vessel that was to return them to Iraq.

The Iraqi captain said he hoped to see Pinolay again. He also gave him a gift, a 250 Iraqi dinar bill bearing the likeness of Saddam Hussein.