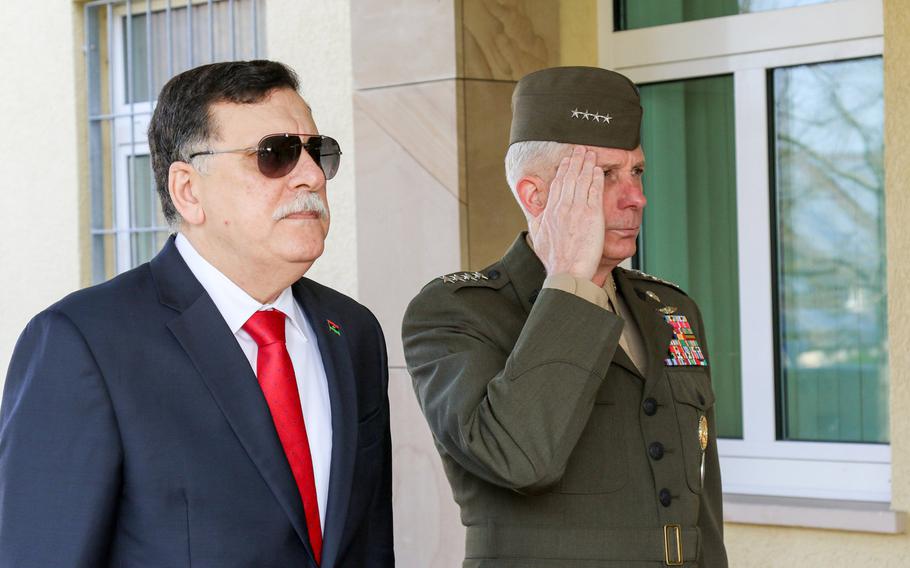 STUTTGART, Germany — Russia’s burgeoning connections to a powerful Libyan warlord could signal that President Vladimir Putin sees an opportunity in Libya’s chaos to sideline the West and catapult Moscow into the position of power broker on NATO’s southern flank.

Like Syria, where Putin quickly seized control of events with a large military intervention in support of the regime of Bashar Assad, Libya offers a vacuum that the U.S.-led NATO alliance has been unwilling or unable to fill six years since toppling dictator Moammar Gadhafi, analysts said.

“Even though there would be risks, Russia stands a lot to gain,” said Christopher Chivvis, a security analyst with the Rand Corp. “(Moscow) would be free to shape the battlefield, much like it did in Syria with its support of Assad. Similar conditions exist in Libya.”

What isn’t clear is whether Moscow’s public flirtation with secular strongman Gen. Khalifa Haftar is mere posturing or a prelude to a deeper intervention.

U.S. President Donald Trump made the prospect of aligning with Russia in a battle against terrorism a centerpiece of his campaign. But America’s bombing of a Syrian air base last week appears to have stymied any immediate attempt at closer cooperation.

In recent months, Russia — which lashed out at Washington over the Syria strikes — has deployed a small contingent of special operations forces along Egypt’s border with Libya. Russia has also conducted several meetings with Haftar, who controls much of the country’s east. U.S. military officials have taken note of Russia’s association with the general and are wary.

“I think that linkage is undeniable at this point in time,” said U.S. Africa Command’s Gen. Thomas Waldhauser during testimony before Congress last month.

Should Russia align with Haftar to launch a formal intervention, it could give Moscow a foothold for setting up sophisticated air defense systems that could challenge allied access to the region in a crisis, Chivvis said.

Since NATO’s 2011 intervention in Libya, which resulted in the toppling of Gadhafi, the country has disintegrated into a virtual failed state with a mix of militias, a weak government and terrorist groups such as the Islamic State competing for territory. Even though Libya is located on the doorstep of southern Europe, NATO has shied away from sending ground troops to help restore order.

In eastern Libya, Haftar — a senior general before he defected to the United States in 1990 — and his militiamen have emerged as a potent force, delivering defeats to Islamic militants and seizing control of several Libyan oil ports. Russia had made a point of courting Haftar, conducting a high-profile meeting in January aboard a Russian aircraft carrier in the Mediterranean.

Some analysts are skeptical about Hafter’s ability to dominate all of Libya or seize control of the capital, Tripoli.

“Perhaps the best they can hope to achieve by supporting Haftar is establishing a degree of security in eastern Libya, but even this will take considerable effort,” wrote Mark N. Katz, a scholar at the Arab Gulf States Institute, in an Atlantic Council analysis. “If so, Libya will not be the great geopolitical gain for Russia that many in the West seem to fear.”

Still, Russia’s intervention in both Ukraine and Syria demonstrates Moscow’s willingness to take on risk. And while the West trumpeted that Moscow would find itself in a quagmire in Syria, Putin quickly achieved his aim of bolstering the Assad government and cementing Moscow’s position as the key power broker in the region.

For all of Libya’s chaos, the battlefield could be less difficult in the short term for Russia to dominate than Syria, where the Islamic State group remains entrenched and where various powers are deeply involved, including the U.S., Iran, Saudi Arabia and Turkey. If Russia had a stronger hand in Libya, it also could exert more control over routes used by migrants leaving northern Africa for Italy. NATO’s southern European states regard cutting the flow of migrants out of Libya as a top security priority.

“If Russia was controlling that route that would be a big boon for them,” Chivvis said. “It would be hard to imagine this wouldn’t influence Italy’s view on sanctions against Russia over Ukraine. This creates all kinds of complications.”

During the past few years, Russia has prioritized its military mission in the Mediterranean, and any effort in Libya would be an extension of moves to bolster forces in the region.

Adm. Michelle Howard, who commands U.S. Naval Forces Europe, said in an interview with Reuters on Sunday that the Russian navy is busier in the Mediterranean now than it was during the Cold War. “It is precedential,” Howard said.

For now, Washington has not signaled any change in its Libya policy, which backs the United Nations-backed Government of National Accord. Last year, U.S. warplanes conducted hundreds of airstrikes to support government forces in an offense against the Islamic State group, helping to root out the militants from the coastal city of Sirte.

“We continue to develop intelligence and watch groups like ISIS in conjunction with the Government of National Accord,” Waldhauser said in a statement that made no mention of Russia. “The counterterrorism fight is still something we both focus on and work very closely on.”

Haftar, whose battlefield successes have emboldened his forces, represents a threat to U.S. efforts to facilitate a political settlement in Libya. In the past, the general’s force has threatened to make a move on Tripoli, which probably could be achieved only with significant Russian support.

“The challenge (for the U.S.) will be brokering a common platform for dialogue among states with vested interests in Libya,” said Libya expert Frederic Wehrey in March 29 testimony before a Congressional committee on terrorism. “How to deal with an increasingly assertive Russia will pose a particular difficulty.”