After more than six decades, DOD civilian calling it quits 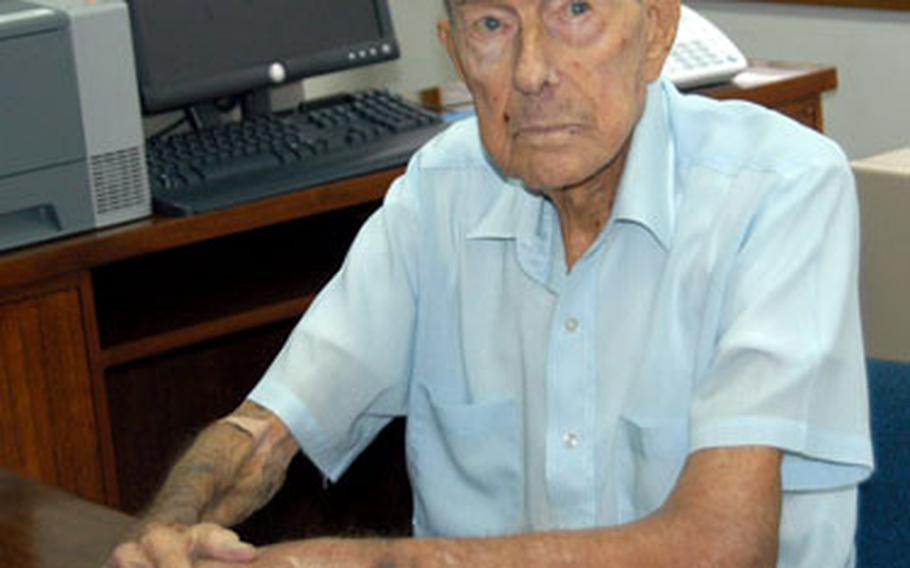 Harold Thon, a U.S. civilian employee, is about to retire after working in Japan for more than six decades, including the last 57 years at Sagami Depot and Camp Zama. (Vince Little / S&S)

CAMP ZAMA, Japan &#8211; At 95, Harold Thon has plenty of fire left for his job as general equipment maintenance supervisor with the Army garrison&#8217;s directorate of logistics.

Last Friday, while nursing a badly swollen left arm, the result of "a wrong shot" given to him by a Japanese nurse at his off-base hospital two weeks ago, he says, Thon was told to go home by his boss, Llewellyn Barrett.

These days, his hearing is diminished and he doesn&#8217;t move as well as he used to. Colleagues often use messages scribbled on notepads to communicate with him.

But he still works 40 hours a week, and they say he&#8217;s the first one in the office every morning and the last to leave. No shortcuts, no favors.

That was part of the deal almost three months ago when he agreed to move over to Camp Zama from Sagami Depot, where he spent 57 years as a maintenance engineer.

In all, Thon has worked in Japan as a U.S. civilian employee for more than six decades. According to research by Zama logistics officials, he&#8217;s the oldest employee in the Department of Defense.

But in mid-September, Thon, who&#8217;s fighting terminal leukemia, will retire to his home in Tachikawa, where he&#8217;ll get to spend more time with Chie, his Japanese wife of more than 40 years.

Sophie Badillo-Betz, management services specialist for Zama&#8217;s directorate of logistics, said there is no mandatory retirement age in civil service.

Thon was not subject to rotation because he arrived in Japan before the 1960s and is "grandfathered" in to his position, she added.

But why would anyone want to keep working that long?

"The Japanese have been very kind to work for. I never had any trouble with the Japanese. They&#8217;re good mechanics and good workers. If it hadn&#8217;t been for them, I probably wouldn&#8217;t have stayed so long."

Thon has only been back to the U.S. twice, he says, and that was to attend schools. He stays in bachelor quarters at Zama during the week but still drives home and spends weekends with his wife in Tachikawa.

Up until he turned 92, he used to run about three miles a day.

Born Dec. 4, 1913, in Perry, Iowa, Thon joined the Marine Corps at age 29 but never saw any action in World War II. He was assigned to the 3rd Marine Division, 9th Marines on Guam and left the service in 1945 as a platoon sergeant.

A year later, he landed his first DOD civilian job in Hokkaido, where he worked in snow removal.

During the Korean and Vietnam wars, Thon helped process military hardware for shipment to the battlefields. Tanks and armored personnel carriers often came back through Japan severely damaged from mines and rocket-propelled grenades, he recalls.

"We got some bad ones in here. We had more trouble than you could shake a stick at during the Vietnam War," he said, adding Army personnel also faced daily protests by Japanese outside the gates who opposed sending the equipment to Vietnam.

Over the decades, he says he&#8217;s seen a significant transformation among the people who have come and gone.

In 2006, Thon took just four hours of sick leave the entire year and used it to visit the dentist, according to Badillo-Betz, who handles personnel matters.

Before Thon transferred to Zama from Sagami Depot, he wanted to make sure there would be enough work to keep him busy, she said. He was placed in charge of a 90-day project aimed at assessing and accounting for thousands of pieces of office furniture on Zama.

About four months ago, he began receiving dialysis treatments every Tuesday and Saturday at a hospital near Yokota Air Base.

"He goes home afterward on Tuesday afternoons. But he&#8217;s always back at work by 7 a.m. the next day," Badillo-Betz says.

Last week, Thon didn&#8217;t respond well to a treatment and the medical staff recommended he stay in the hospital for five to seven days. After roughly 36 hours, however, he decided to check himself out.

"We are so inspired by him," Badillo-Betz said. "I live three minutes away and sometimes I&#8217;ll have a headache and don&#8217;t feel like going in. He drives to dialysis by himself. He doesn&#8217;t ask for special considerations because of the illness.

Thon and his wife have no children. He says they don&#8217;t plan to travel or do anything special. He just wants to take it easy at home.

But he now must secure a visa in order to stay in Japan. Badillo-Betz said it&#8217;s a matter of getting the right paperwork together.