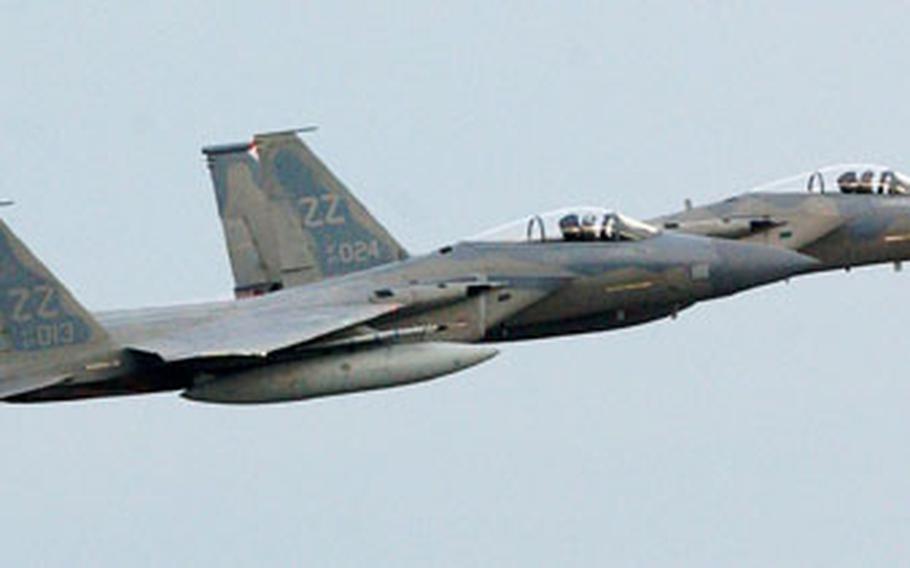 Two F-15s take off from Kadena Air Base in Okinawa Tuesday to participate in a combat scenario for the 18th Wing’s Turkey Shoot competition. (Rey Ramon / USAF)

Two F-15s take off from Kadena Air Base in Okinawa Tuesday to participate in a combat scenario for the 18th Wing’s Turkey Shoot competition. (Rey Ramon / USAF) 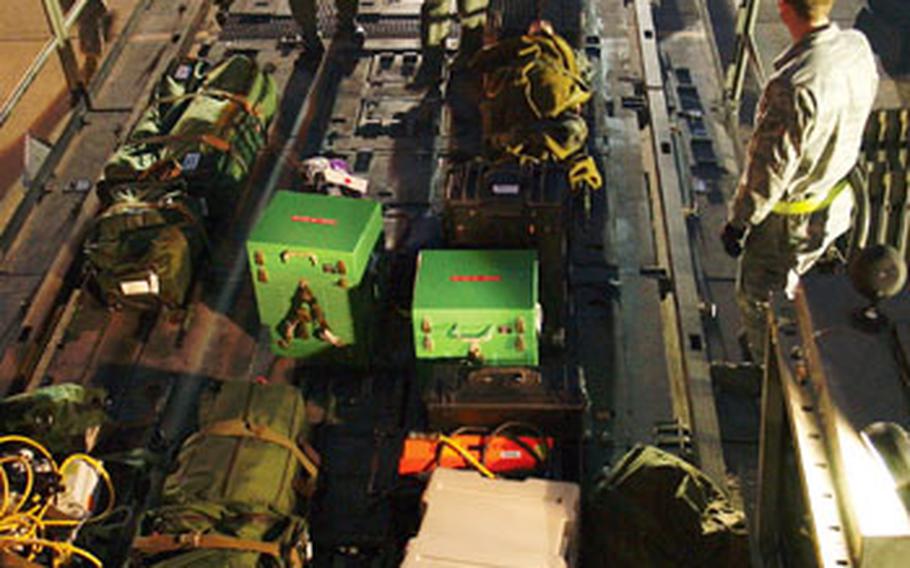 KADENA AIR BASE, Okinawa &#8212; Stress levels among 18th Wing aircrews have gone down a notch after they wrapped up a weeklong virtual combat competition Friday.

Jovial rivalry and drive paved the way for airmen to show their skills and ability to react to threats in simulated situations during the annual 18th Wing Turkey Shoot.

F-16 pilots from the 18th Aggressor Squadron from Eielson Air Force Base in Alaska played the role of the enemy forces and also served as judges, base officials said.

The competition included a series of realistic defense-counter air scenarios performed in the air, on the ground and in flight simulators.

&#8220;Anytime you take guys like us and make it a competition, you want to be better than everyone else,&#8221; White said.

The squadron provides air surveillance and detection and competed against the 623rd Air Control Flight, a ground-based air control unit.

Squadrons with similar missions and capabilities competed against each other, base officials said.

Winners will be recognized at an award ceremony Friday.

White said one of the highlights is the interaction and tactical coordination with crewmembers he typically doesn&#8217;t work with.

White is pretty confident in his squadron&#8217;s abilities to shine.

Capt. Rocky Entwistle, senior director for the 961st Airborne Air Control Squadron, and a judge for the 961st and 623rd squadrons, was mum on the results, but said the competition was stiff.

&#8220;I was impressed overall, seeing the amount of preparation put into it. These guys stepped up their game,&#8221; he said.

Kadena airmen have an edge over their stateside peers because they are able to train with a diverse group of squadrons that offer a wide range of capabilities, said Lt. Col. Robert Novotny, commander of the 67th Fighter Squadron.

At similar competitions at stateside Air Force bases, squadrons compete internally or wings have to fly in other air control, refueler or tanker squadrons to form a cohesive air combat team, he said.

At Kadena, all the assets are in one place, Novotny said.

&#8220;If the wing goes to war there is some foundation of interoperability. We&#8217;re able to train together daily versus going off to war and having to fight together for the first time,&#8221; Novotny said.

Capt. Chris Rolfe, assistant flight commander of weapons and tactics for the 909th Air Refueling Squadron, said the competition demonstrates how critical everyone&#8217;s role is in completing the missions.

The performance and results from the competition also serve to encourage airmen, Rolfe said.