After just one week of rehearsals, DODDS students off to see the Wizard 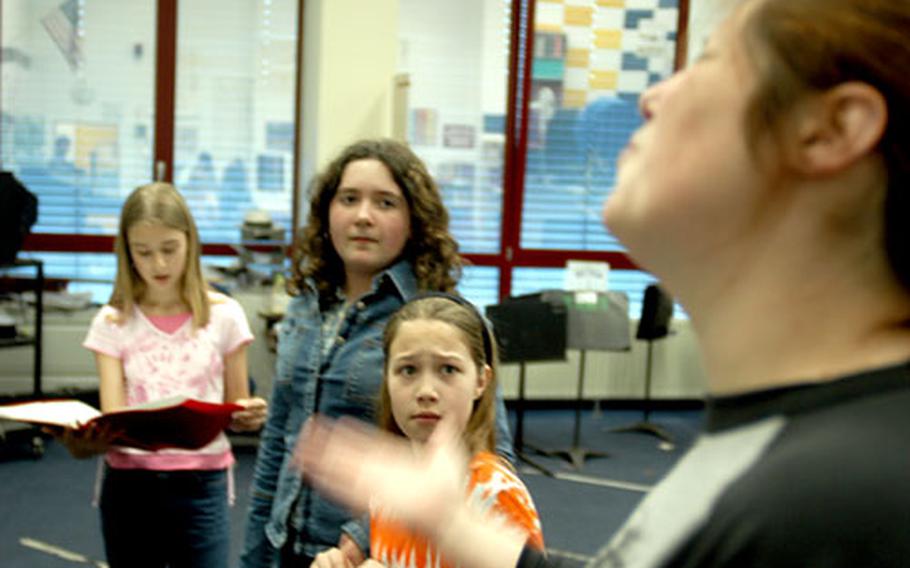 Pupils from the Wiesbaden area will put on a Western-style version of &#8220;The Wizard of Oz&#8221; Saturday at the Wiesbaden American Middle School.

If it goes off without a hitch more than a few of the pupils will be surprised. They had only one week to audition, learn their lines, and, in many cases, learn to sing and dance.

The production is one of 17 that will be presented during the Missoula Children&#8217;s Theatre&#8217;s tour of U.S. military bases in Europe this month and next. Each week two teams, made of two persons each, descend on different Department of Defense schools on Monday to pick the actors and begin practicing. By Friday, the pupils are ready to perform.

This is the fifth year directors from the Montana-based theater company have toured Europe, offering children a crash course in theatrics. This week, a second team is in Kitzingen.

The singing and dancing proved most difficult for 10th-grader Shawn O&#8217;Dell, who plays Lionel, the &#8220;not quite cowardly lion,&#8221; as he put it. This is the third musical he has participated in with the children&#8217;s theater company, so he is getting used to the quick turnaround.

Shawn learned by doing during last year&#8217;s musical, a modern adaptation of &#8220;Little Red Riding Hood,&#8221; when the Boy Who Cried Wolf forgot to cry wolf at the end of the play. Shawn was forced to ad lib lines, he said.

This year&#8217;s play, called &#8220;The Wiz of the West,&#8221; features Munch Kins, a hillbilly takeoff of the Munchkins, and tarantulas played by local kindergartners and first-graders.

Eighth-grader Kaitlyn Collums, who plays the lead role of Dotty, said she has experience singing and dancing in other musicals.

Learning her accent did not prove too challenging, Kaitlyn said.

Dorothy and toto, with a twist

Notes: Adults wishing to attend both shows will pay $3 for the second show.