From the Stars and Stripes archives:

After Iwo, life was hectic for surviving flag-raisers 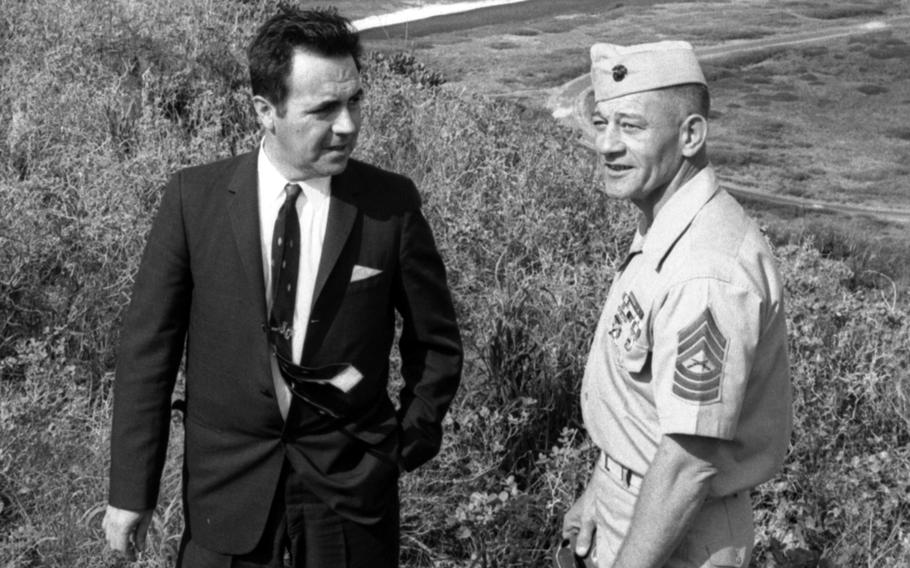 TOKYO — "To tell the truth, we got more sleep on Iwo Jima than we did while touring the United States later during the War Bond Drive."

That's how Rene Gagnon, one of the survivors of the Mount Suribachi flag raising, described his hectic and "open humorous" trip made at the request of President Franklin D. Roosevelt, who died the week the men returned to the U.S.

As a 19-year-old private, Gagnon toured the country with the two other survivors, being wined and dined for "doing what was in the line of duty."

"We did not feel the impact of the flag raising, but the men on the beach and in the ships did. The conquest of Suribachi meant that we had taken the area in five days against all odds.

"On our whistle stop tour of the States, we were in a constant daze. Ira Hayes (Marine private) tucked a $1,000 bond under the mattress in New York and forgot it the next morning when we left.

"It finally caught up with him in Chicago, where he promptly cashed it in for dollar bills, which he tossed all over our room. He was a funny guy.

"John Bradley (a Navy pharmacist's mate) had decided to be a mortician before the war. Every town we hit, his first question invariably was, 'What's the death rate in this town?' All he was looking for was a place to settle down after the war," Gagnon said with a laugh.

After the cross-country tour, Gagnon was reassigned to China "where we used to eat steak dinners every night for 35 cents."

What does Gagnon think of today's No. 1 trouble spot, Vietnam?

"We are doing the right thing by fighting a diplomatic war. Our company lost half of its total personnel in five days. and those gung-ho days are over. We can't just leap into the breach," said Gagnon, who is now an airline sales representative.