After Iraqi police station was destroyed twice, they're hoping the third one is a keeper 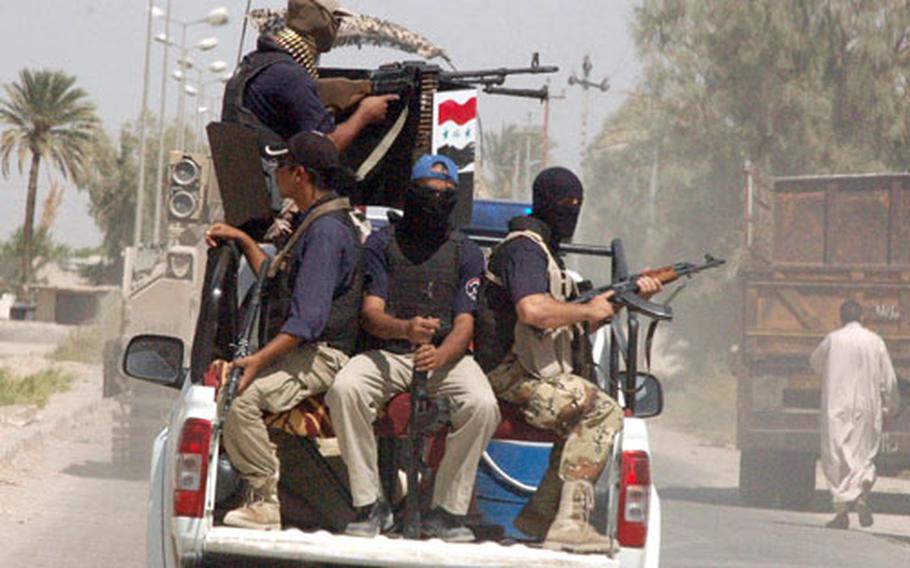 Iraqi police cover their faces to conceal themselves from insurgents as they ride to a raid in Jurf As Sakhir, Iraq. (Monte Morin / S&S)

Iraqi police cover their faces to conceal themselves from insurgents as they ride to a raid in Jurf As Sakhir, Iraq. (Monte Morin / S&S) 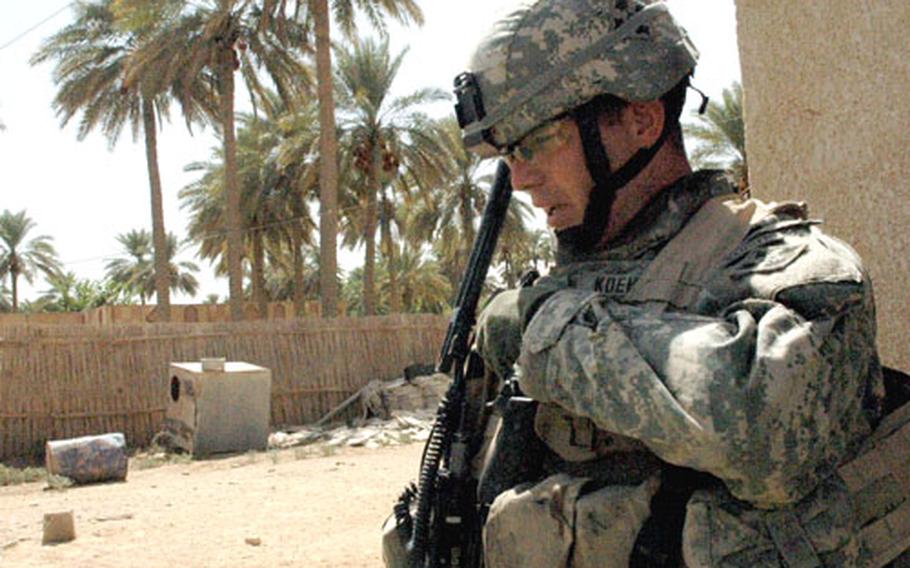 That&#8217;s what U.S. Army and Iraqi police forces are hoping after the construction of a $500,000 police station in this Sunni Arab farm region in the southern reaches of the so-called Triangle of Death.

The Jurf As Sakhir Police Station is critical to the battalion&#8217;s campaign to fold the former Baathist stronghold into an integrated, new Iraq, according to Lt. Col. Pat Donahoe, commander of the 1-67.

During the last 10 months, soldiers from the Fort Hood, Texas-based battalion have battled Sunni insurgents in the lush date-growing lands along the western bank of the Euphrates River and have struggled to integrate the local police force, staffing the small station with a mix of Sunni and Shiite officers.

At the same time, the unit has sought to weed out corrupt officers from both religious sects who have infiltrated the police.

The battle has been a hard one, commanders say, but has shown signs of progress.

Most recently, Koehler led his company and a team of Iraqi police on Operation Serpico, a raid that targeted a suspected insurgent and corrupt Sunni police officer who lived not far from the base.

Police and soldiers did not find the police officer, who is suspected of planting roadside bombs in the area, but they did capture a suspected insurgent who was on an Iraqi police wanted list.

He was discovered hiding under a mattress and, after slipping out of his plastic zip-tie handcuffs, began fighting with U.S. soldiers and Iraqi police before he was finally subdued.

While the operation was small compared to many of the raids conducted throughout Iraq, it was a powerful signal to local Iraqis that the police were not going to be driven out of the area, officers said.

The new police station, which consists of several one-story, sky-blue buildings surrounded by towering blast walls, is situated beside a small U.S. patrol base.

The Jurf Patrol Base is itself a collection of metal container boxes, guard towers and a small command post which sit in the shadow of a local mosque.

Ensuring the small police station&#8217;s security is a major focus of soldiers at Jurf As Sakhir.

Donahoe&#8217;s area of operations is one of the most politically and tactically complicated in Iraq.

The battalion&#8217;s headquarters, located within a massive, electrical power station in Musayyib, straddles the Shiite-Sunni fault line south of Baghdad.

While Death Dealer soldiers in the northern half of the area of operations are busy fighting Sunni Arab insurgents, soldiers in the southern half, which includes the Shiite city of Karbala, must contend with a mix of competing Shiite political groups and militias.

While commanders say they&#8217;ve seen some improvements in Jurf As Sakhir, locals have been slow to welcome U.S. soldiers here.

Buckley said that on his platoon&#8217;s first day at the base, insurgents fired several mortars at them.

None of the shells landed close to the base however.