After Iraq service, Lakenheath airman to tell American audiences of his experiences 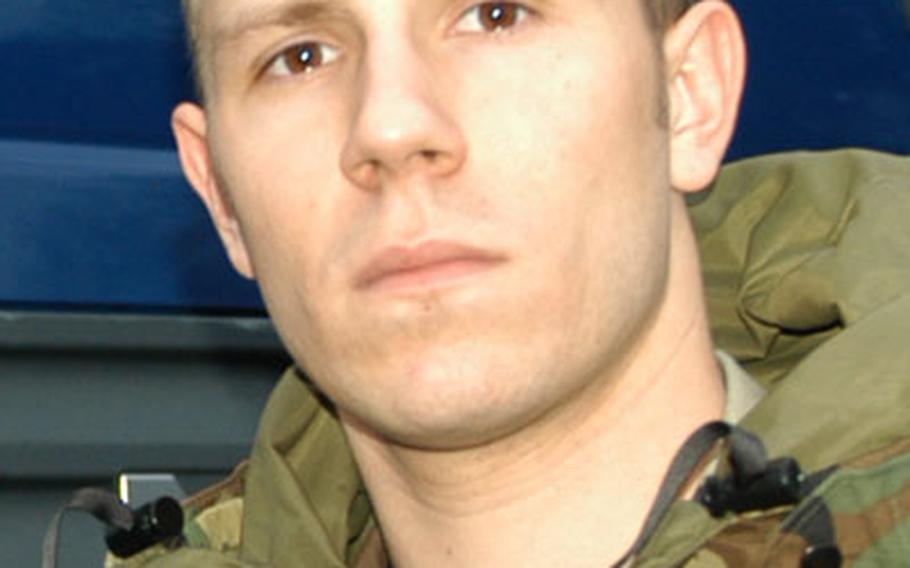 Staff Sgt. Jeramiah Poff is one of only two airmen selected from the Air Force’s 350,000 members to participate in the Pentagon’s “Why We Serve” program. (Bryan Mitchell / S&S)

In Iraq, however, the five-year airman had one of the most perilous missions of the conflict: convoy duty.

He served as part of a team ferrying supplies between Camp Arifjan in Kuwait and Air Force installations in Iraq. In that role, he worked as both a driver and a gunner.

All told, he spent nine months deployed, seven in the Middle East, including nearly 50 days in Iraq. Poff trained with soldiers before traveling more than 6,700 miles during his 47 days in Iraq.

For his service downrange, Poff was awarded an Army Commendation Medal as well as an Iraqi Campaign Medal, he said.

Poff returned from Iraq in June and less than a week later enrolled in the Airman Leadership School, where he finished as a top graduate, according to his supervisor.

Soon after he finished the school, his 48th LRS supervisors nominated him for the &#8220;Why We Serve&#8221; program.

The program is a Department of Defense initiative for &#8220;members of the armed forces to speak about the nobility of service and share their personal experiences with the American people,&#8221; according to the program&#8217;s Web site, http://speakers.dod.mil/.

The Pentagon&#8217;s &#8220;educational campaign&#8221; was launched last year when 13 troops from across the four branches of the military fanned out across America to share their stories directly with the public, according to the Defense Department.

The Web site specifies that program members speak about their personal experiences, not about specific Defense Department policy.

Earlier this month, Poff was alerted that his 2007 would begin back in the United States. He was scheduled to fly on Dec. 31 to Washington, D.C., where he was to take temporary station under a Marine Corps major at the Pentagon.