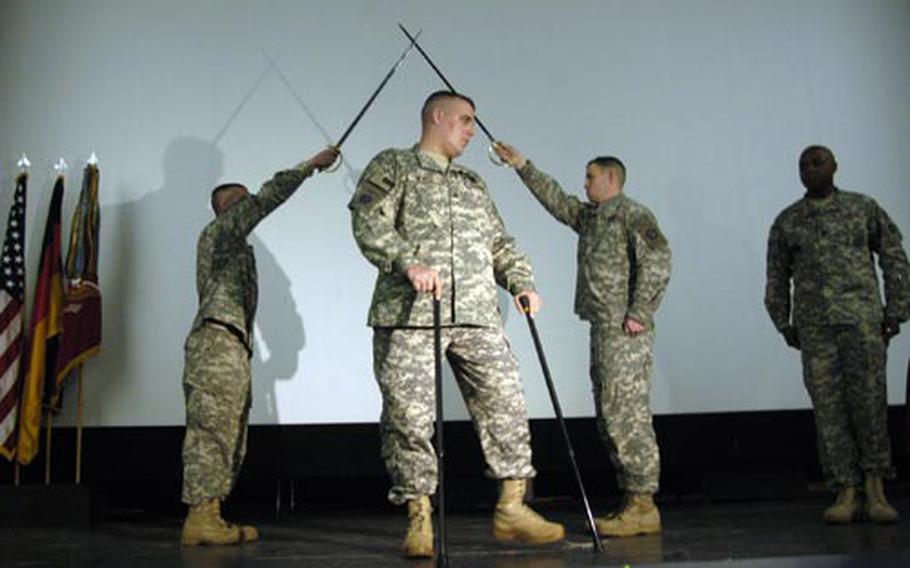 Army Sgt. Ryan J. Newell, a former member of Battery A, 5th Battalion, 7th Air Defense Artillery, lost both legs in an improvised bomb attack earlier this year in Afghanistan. He deployed soon after his promotion to sergeant, and had not been formally inducted into the noncommissioned officer corps. His former unit inducted him Wednesday. (Matt Millham / S&S)

KAISERSLAUTERN, Germany &#8212; Army Sgt. Ryan J. Newell doesn&#8217;t have many memories of Jan. 7, least of all the blast that took his legs. Nor does he remember much after that.

It was four days after the bomb exploded beneath his armored Humvee on a road outside Jalalabad, Afghanistan, that he woke up on the other side of the planet in a hospital bed with a tube stuck down his throat.

For the past 11 months, his days have been dedicated to getting better.

The main reason, he said, was to attend the unit&#8217;s change of command ceremony. Capt. Michael Rodick, his battery commander, has been like a brother to him during his recovery.

His unit wanted to do something for him, too, and officially inducted Newell into the noncommissioned officer corps on Wednesday.

"For those of you in attendance that do not know Ryan Newell&#8217;s story, I ask that you take the opportunity after the ceremony to get to know this American hero," battalion Command Sgt. Maj. Darrin Jefferies told the audience.

In October 2007, Newell was a newly minted Army sergeant when his unit asked for five volunteers to deploy to Afghanistan. The only requirement: they had to be noncommissioned officers.

Though new to the corps, his unit picked him because of his prior deployment experience &#8212; he&#8217;d already deployed to Iraq with the 1st Infantry Division.

In Afghanistan he was part of a unit that hunted down makeshift bombs. It was one of those bombs that took his legs roughly two months into the deployment.

After the blast, Newell was a mess, but he was also lucky. The two soldiers in the vehicle with him that day both died.

Newell says the quick action of a pair of Army noncommissioned officers kept him alive.

An Army staff sergeant in his convoy jumped to action and put a tourniquet on what remained of his right leg, and a Special Forces medic brought Newell &#8212; who flat-lined twice over the next four days &#8212; from the brink of death.

Despite all he&#8217;s been through, Newell wants to keep wearing his uniform.

"I am planning to stay in if the Army will allow me to," Newell said. "I want to go train new soldiers coming into the Army, and hopefully they&#8217;ll give me that chance to be able to go do that."

Serving as a noncommissioned officer in combat, he said, has been one of his life&#8217;s greatest honors.