After Hours: Updating a traditional pub 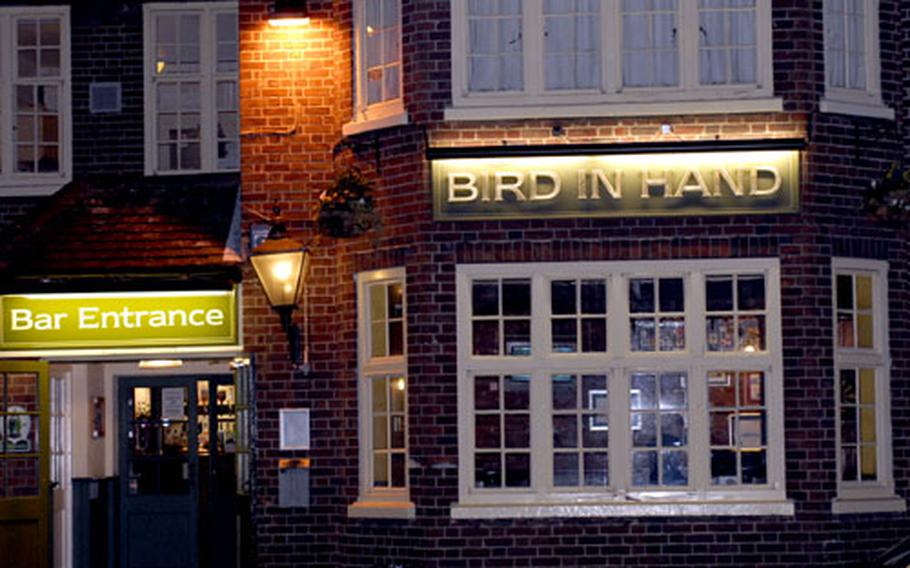 Bird In Hand has been a fixture outside of RAF Mildenhall for more than 60 years. It was used to house servicemen during World War II and servicemembers returning from Iraq and Afghanistan. Bird In Hand has a hotel, pub and restaurant. (Mark Abramson / S&S)

The closest pub, hotel and eatery to RAF Mildenhall&#8217;s gates has been a fixture in the area for well over 60 years. Its new managers want to maintain that tradition but add something new to spice things up a bit.

The Bird In Hand housed bomber pilots during World War II. Today, it houses American servicemembers returning from the dusty battlefields of Afghanistan and Iraq who need a place to stay briefly. The place prides itself on helping those people relax, readjust or just let off steam after months-long deployments, new manager Peter Peck said.

"We get a lot of American servicemen here. These guys need looking after," Peck said.

Peck manages the Bird In Hand with his wife, Daphne. They used to manage another Greene King property, The Eagle, in Cambridge.

The Bird In Hand with its green wood-paneled walls, brick and wood support beams, leather couches and tavern fireplace to keep patrons warm on blustery autumn and winter nights is inviting and cozy. The pub offers beers from around the world, from British brews such as IPA to Budweiser, Becks and others.

It also has meat pies, bangers and mash, fish and chips, a chicken breast with bacon that is smothered with cheese, and other British dishes to fill one up. Fish and chips is one of the popular dishes as is the traditional British breakfast, Peck said.

While remembering the Bird In Hand&#8217;s history and role it has played with RAF Mildenhall&#8217;s past is important, Peck said he wants to bring in some fresh ideas.

Those ideas this year include a Thanksgiving feast in which patrons get to carve up a cooked bird to enjoy at the tavern and restaurant. And some Christmastime activities for children and families are on tap this year before people head home to the States for the holidays.

Bird In Hand now has Quiz Night every Wednesday to test participants&#8217; general knowledge as well as their knowledge of all things American. It costs 1 pound per person for teams of four to eight people. The winner gets the entrance fees. Second-place finishers get a prize, such as a bottle of wine. And the last-place contender gets a booby prize, which could be anything from a torn T-shirt to something else of little or no value.

The pub also has jazz nights with live music every other Friday night.

"We just want to make it friendly," Peck said.