After hours: The Wheatsheaf The Wheatsheaf Inn decor includes a solid wood bar, fireplaces and a conservatory. There is also outdoor seating and a place for children to play. (Photos by Mark Abramson/Stars and Stripes)

The Wheatsheaf Inn decor includes a solid wood bar, fireplaces and a conservatory. There is also outdoor seating and a place for children to play. (Photos by Mark Abramson/Stars and Stripes) 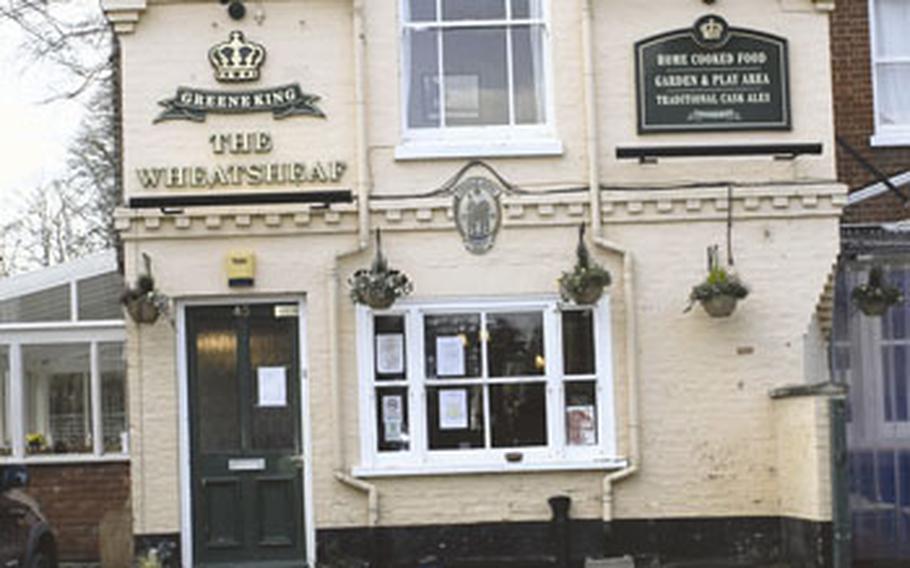 The Wheatsheaf Inn sticks out with its peach facade. The combination restaurant, pub and bed-and-breakfast inn has been in business since the 17th century and it offers a variety of dishes ranging from carvery to vegetarian. () The conservatory is an inviting place to eat with its glass-paneled-and-brick walls. ()

Whether you fancy carvery, vegetarian meals or traditional English dishes, there is a place near Newmarket that offers generous helpings that definitely fill you up.

The Wheatsheaf Inn has been a part of the East Anglia landscape since the 17th century. The establishment recently traded hands and is now under the ownership of husband and wife Sharon and Kevin Twite, their friend Liz Reeve and her partner, Tony Curry.

She said there are no plans to make major changes as to how the pub, restaurant and four-room bed-and-breakfast inn operates since the new owners took over in September. But already they have fidgeted with the menu by adding a mixed grill with steaks, gammon and sausage. They also added spaghetti Bolognese.

"We got a big vegetarian menu," Sharon Twite said.

As for the frosty ones and fine drinks, the Greene King IPA beer and wines from around the world are popular with patrons, she said. The menu lists wines from South Africa, Italy, Chile and other corners of the globe.

The Wheatsheaf may be hard to spot from the street, even with its peach facade that welcomes visitors. The inside is adorned with dark-brown wood paneling. There are also a couple of fireplaces and a conservatory that offers plenty of light. The outdoor seating is a hit during the warmer months, Sharon Twite said.

"We like to think it is a family atmosphere," she said. There is even a play area outside for the kids, she pointed out. "We are family-friendly."

But the restaurant attracts a mix of people of all ages as well as Americans, she said.

The Wheatsheaf also does special events, such as parties, and there is a charity fundraiser planned.

The "Race Night" fundraiser, in which people can donate up to two pounds to pick their favorite race horse and watch it compete on a big screen, is scheduled for March 31 at 8:30 p.m. The money will benefit the Dreams Come True charity for terminally ill children.