After hours: The Tiger's head 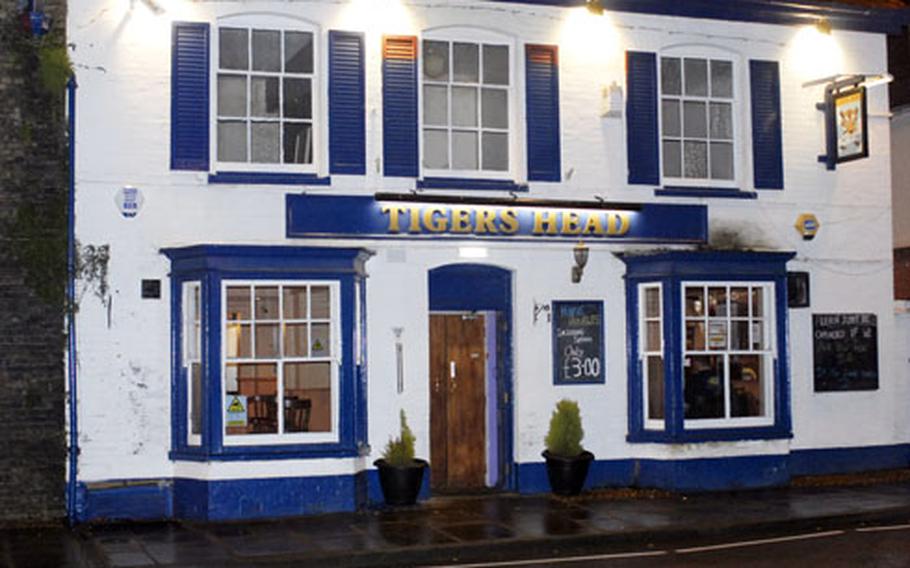 The Tiger’s Head recently reopened after being remodeled. The Mildenhall mainstay has been in business for more than 100 years. (Photos by Mark Abramson/S&S)

The Tiger’s Head recently reopened after being remodeled. The Mildenhall mainstay has been in business for more than 100 years. (Photos by Mark Abramson/S&S) 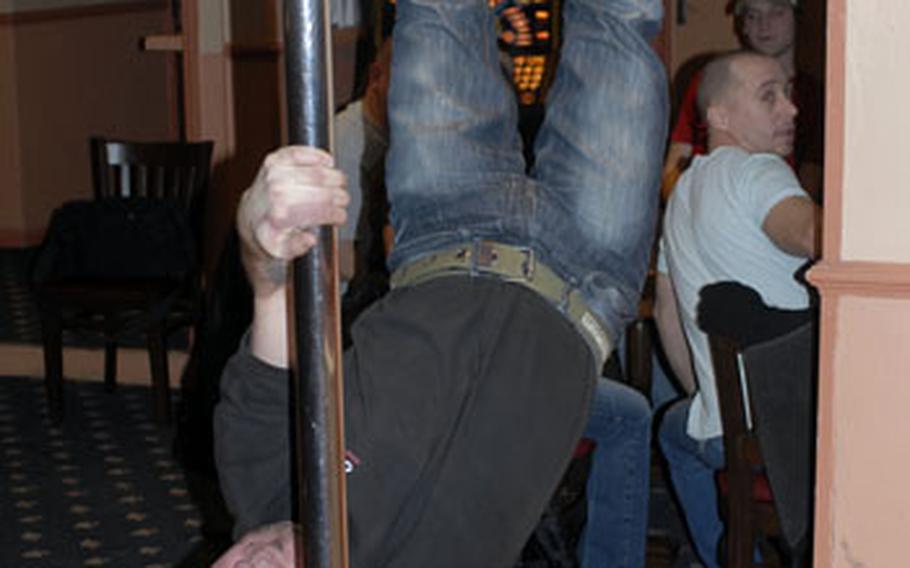 Patron Wayne Brown attempts to climb the pole and touch the ceiling with his rear end to win a bottle of vodka at the Mildenhall pub. (Photo by Mark Abramson/S&S) 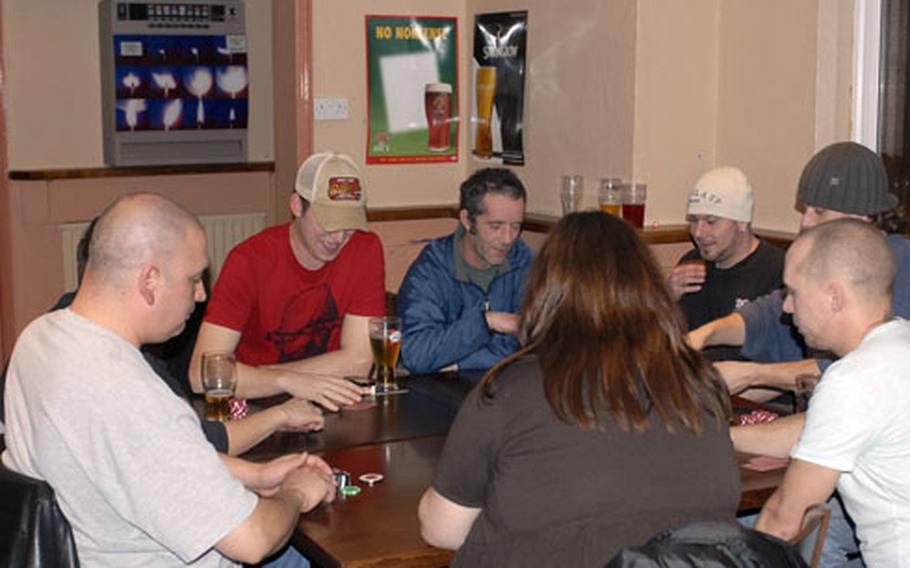 Poker night on Wednesday nights is something new that management at the pub tried for the first time last week. Other changes in the works since the pub reopened last month include meat pies and musical entertainment. (Photo by Mark Abramson/S&S)

An old pub in Mildenhall has a new look and new management.

The Tiger&#8217;s Head recently reopened after months of being shuttered for remodeling work and a change in ownership. The new owner is Birmingham-based Enterprise.

General manager Peter Wakefield didn&#8217;t know how long the pub has been around, but he estimated it has been part of the Mildenhall landscape for more than a century. He even has a picture taken outside the pub that marked the coronation of King George V in 1911.

"It was a very popular pub before. It was a mess before," Wakefield said.

"There are a fair number of Americans who come in, and that is growing," he said.

Furniture is something new at The Tiger&#8217;s Head, so people no longer have to just stand around and enjoy a brew like they did before the remodel, Wakefield said. And there are plans to offer hot Australian-style meat pies, barbecue burgers, ribs and hot dogs on sunny days outside.

The pub is also well-lit and painted in light colors to create a tranquil atmosphere. The crowd is described as mixed, with people ranging in age from 30s to 50s during the week and all ages on the weekend.

Wakefield also has a few TV sets on order to show rugby, soccer and other sports. The pub sponsors a local soccer team.

Now the pub only serves keg drinks, such as Guinness, but it will soon offer real ales that will be changed up periodically, Wakefield said.

He wants to spice things up a bit at The Tiger&#8217;s Head by making it more than just a place to enjoy an ale, cider or other drink.

One way he&#8217;s making the place a little more of a hoot is with a unique contest in which the first person to successfully climb a pole and touch his or her tuckus cheeks to the ceiling wins a bottle of vodka. People have come close, but no cigar in accomplishing the feat, Wakefield said.

"The (local) rugby team has been interested in doing it," Wakefield said.

Wakefield wants to get a permit to hold a keg race from RAF Mildenhall&#8217;s front gate to the pub. A team would have to transport a keg loaded with water to The Tiger&#8217;s Head for a prize. He would want to make it a charitable event and give awards to teams that raise the most money.

"Quite a few of the Americans are keen to do it," Wakefield said about the keg race.

Plans are in the works to have bands play on Sundays, feature karaoke sometimes and have music theme nights. The Tiger&#8217;s Head is also experimenting with a poker night on Wednesdays.

The Tiger&#8217;s Head is open from noon to midnight, Mondays through Thursdays; noon Fridays to 1 a.m. Saturdays; noon Saturdays to 1 a.m. Sundays; and noon Sundays to as late as 11:30 p.m. It is located at Marketplace, Mildenhall, Suffolk, IP 28 7EQ.