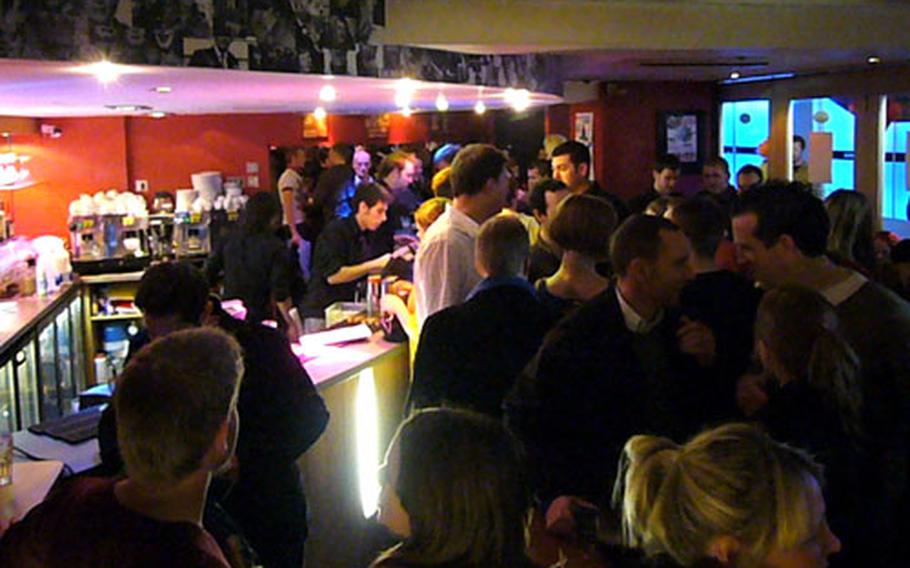 The lone bar inside Ta Bouche is surrounded by partygoers on a recent Saturday night in Cambridge. (Sean Kimmons / S&S) One of the nooks and crannies found in the Ta Bouche bar, where partygoers can mingle with friends while enjoying a night out in Cambridge. (Sean Kimmons / S&S)

CAMBRIDGE &#8212; There&#8217;s a street in this historic city where young people often congregate to mingle and forget the worries that college and work life can create.

Market Passage, a short pedestrian strip near the city&#8217;s Market Square, brings in the crowds with three popular night spots huddled together.

One of them is Ta Bouche, a corner bar that is regularly standing-room-only. There are a few nooks and crannies adorned with trendy furniture to sit on, but one has to be quick to snatch a spot.

And anyway, for those on the prowl, standing in the swarm of people lingering around the venue&#8217;s only bar might be the best option to spark a conversation.

Horner believes it is the bar&#8217;s relaxed, friendly attitude that keeps people coming back. That and the bartenders, who, he said bring a little flair to the place.

&#8220;We pride ourselves on the speed of cocktails we make,&#8221; said Horner, adding that bartenders should be able to make 10 cocktails in less than three minutes.

Sometimes bartenders can be seen showing off their speed skills along with an added trick or two while making a concoction.

This could be the result of training for new staff members by a La Raza manager, who has won bartending competitions, Horner said.

The bar has a happy hour special for those wanting to see the bartenders in action at a cheap price. Patrons can buy a cocktail for 3.10 pounds between 6 and 10 p.m. Monday through Thursday.

Location: 10-15 Market Passage, Cambridge. In the city center along a pedestrian walkway next to the B Bar and The Fez nightclub.

Drinks: There is a cocktail special Monday through Thursday nights for 3.10 pounds. Beer sold by bottle only.

Food: Lunch ranges from appetizers, such as bruschetta and nachos, to main entrees, such as a pork sausage and mash for 7.25 pounds. A variety of salads for 6.95 pounds and sandwiches for 5.45 pounds are also available.

Entertainment: None. The bar can be rented for free to celebrate a special occasion with 50 to 150 guests. The free hire system is based on a minimum bar spend and is available only for rent from Sunday to Thursday.

Clientele: Young crowd between the ages of 18 and 25.