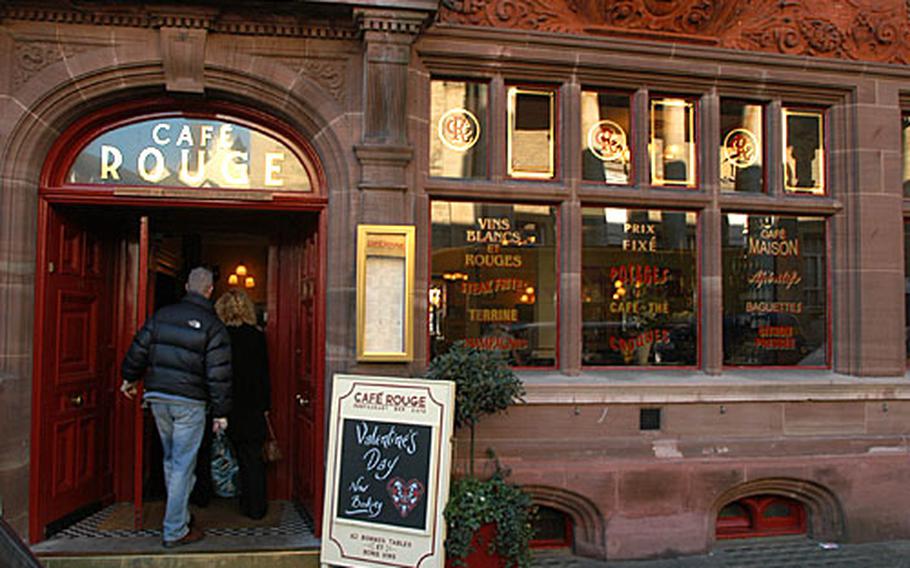 But you hardly need any convincing based on the popularity of this town&#8217;s main street French connection: Cafe Rouge. You don&#8217;t normally need a reservation, but the nearly 200-seat eatery does fill to capacity on weekend nights.

Cafe Rouge is, in truth, a chain restaurant with more than 50 locations across Britain. But, it&#8217;s the rarest of franchises that combines an understated setting with a menu chock-full of variety, flavor and a little bit of zest to create a family-owned atmosphere hard to find on most corporate logos.

Located at the high end of the slight hill that makes up Abbeygate Street in central Bury, the restaurant is conveniently located adjacent to the can&#8217;t-miss Britain&#8217;s smallest pub, The Nutshell.

The autumn-red-hued stone edifice of the three-story building home to Cafe Rouge makes it impossible to miss among the aging light, wood pastels along the central streets.

Inside, the decor is nothing spectacular, nor is it lacking. Oversize windows in the front and rear of the restaurant provide plenty of light and the tables&#8217; ample spacing ensures you aren&#8217;t bumping elbows with fellow customers. The interior is restrained only to not overwhelm the lengthy menu.

The food is not four-star fare, nor is it that microwaved, reprocessed grub dressed up smartly to earn its 8-pound price tag. It is, unequivocally, French, and that alone makes it different enough to warrant a notch above bangers and mash.

A few dishes off the menu include the tarte paysanne, which is a tartlet filled with smoked bacon, red onion, spinach, mushrooms and cheese served with garnish salad and fries for 7.95 pounds ($16) or the salad au poulet et roquefort, a salad of chargrilled chicken and bacon on a mixed leaf, pepper and red onion salad with crumbled roquefort cambalou for 8.95 pounds ($17).

But during my past visits, the steaks &#8212; which include the $30 12-ounce ribeye le grande steak as well as the $16 6-ounce ribeye minute steak &#8212; are always prepared exactly to your specifications and melt like chocolate confections in your mouth.

Just don&#8217;t ask for a draft beer to wash it down, as Cafe Rouge serves bottled beer and wine.

Location: From RAF Mildenhall, take the A1101 to central Bury St. Edmunds. Park at the central parking lot and walk up Abbeygate Street to the high end.