After Hours: Solve that craving for Mexican fare with a run to Mannamexico 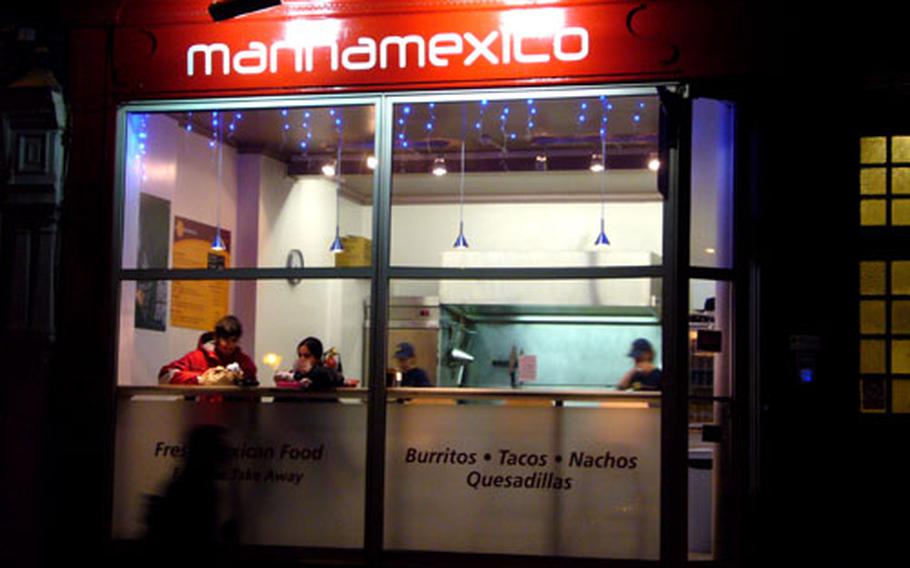 Eat in or take it away. Either way, Mannamexico in Cambridge may be the best option for getting that burrito fix. (Geoff Ziezulewicz / S&S)

That was the mind-set of Luis Navarro, a Mexican who is married to a Brit. In fact, it was his business partner, Californian Drew Grewal, who first pined for such an option in the land of chippies and curries.

Now, this small eat-in or take-away joint is the closest thing you&#8217;ll find here to that American burrito stand experience.

Emphasizing fresh ingredients and that memorable motto, the restaurant offers quesadillas, tacos and other Mexican fare that Navarro said he modeled after his grandmother&#8217;s roadside-stand offerings in Mexico.

The burritos are stuffed with your choice of meat, beans, rice, cheese, salsa and lettuce, but they shouldn&#8217;t immediately be written off as mere junk food, he said. That thin wrap also cuts down on the carbs.

All salesmanship aside, how does the food actually stack up? Well, from one American to another, it&#8217;s not bad.

But this isn&#8217;t the cilantro-sprinkled, complexly delicious burrito you&#8217;d buy at a San Diego stand. It&#8217;s closer to the American chain restaurant Chipotle, which offers cheap and freshly made burritos that are good enough for most palettes.

The quesadilla was decent, but then again, a bunch of melted cheese can make up for many culinary shortcomings.

There was certainly a feeling of internationalism at the restaurant last week, as an American Stripes reporter ordered Mexican food from a Polish employee. Viva globalization!

But if you need your burrito fix, and you don&#8217;t want to make them yourself, check out Mannamexico. It&#8217;s head and shoulders above any other Mexican fare in the area.

Location: 33A Regent St. across from Downing College in downtown Cambridge.

Clientele: Whoever walks in.

Cost: A huge steak burrito costs about 5 pounds, with everything else on the menu a pound or two cheaper.