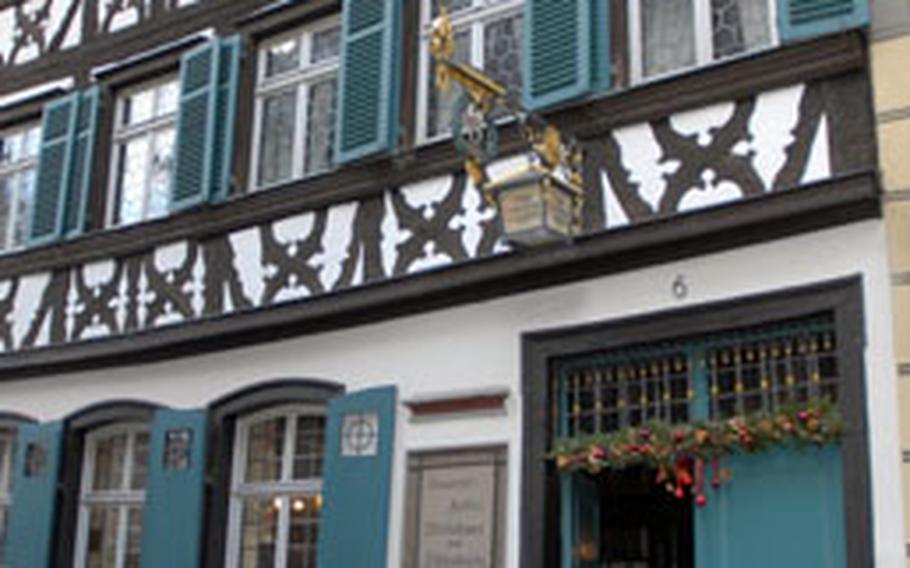 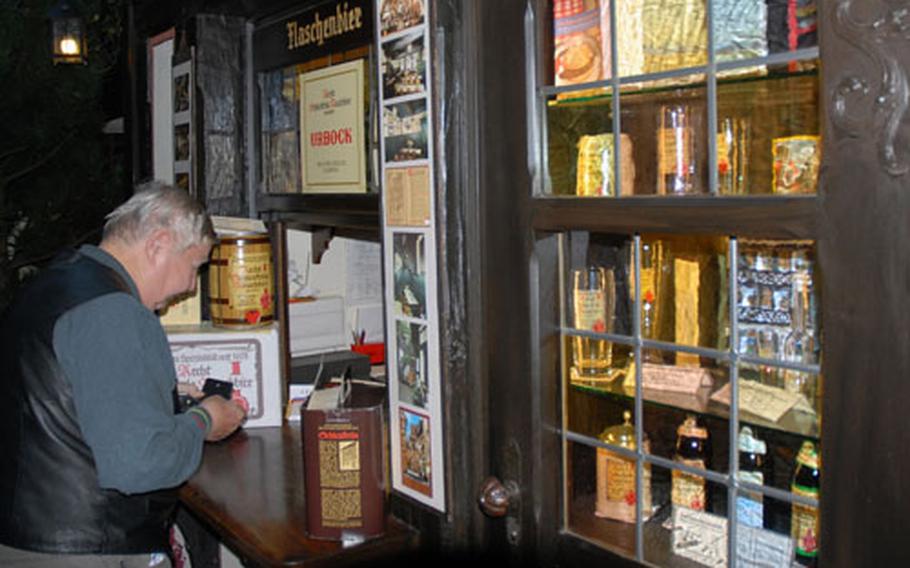 If your regular beer isn’t smoky enough for you, head down to the Schlenkerla Old Inn, in the heart of Bamberg and try a glass of rauchbier. If you don’t like the first one, keep drinking, it gets smoother. (Mark St.Clair / S&S)

Possibly the best place in town to try it in the colder months is the Schlenkerla Old Inn, located in the heart of old town.

Frequented by locals, students and tourists alike, Schlenkerla is a lively place steeped in tradition and Franconian charm. Shlenkerla&#8217;s name is derived from an old German expression, &#8220;schlenkern,&#8221; which meant to walk crookedly.

As the story goes, one of the former brewers had an accident and couldn&#8217;t walk normally, causing the locals to refer to him as the &#8220;schlenkerla.&#8221; The name eventually became synonymous with the brewery, tavern and the beer itself.

Schlenkerla&#8217;s rauchbier is brewed in three varieties: the dark, bottom-fermented M&#228;rzen; Schlenkerla Smokewheat, an unfiltered wheat beer with a lighter flavor; and the seasonal Urbock, a mature beer tapped from oakwood casks from October through December. Feb. 6 marks the beginning of the seasonal Lentbeer, served until Easter.

Not for the faint of heart, Schlenkerla&#8217;s beer has been said to remind some drinkers of smoked pork, although the flavor is derived from the brewers exposing the beer&#8217;s malt to smoke. Considering the pork-heavy menu the kitchen, that&#8217;s not a bad thing at all. If at first the smoky flavor isn&#8217;t what you&#8217;d expect, try another glass. It goes down oh so smoothly.

For those who eat, the Old Inn doesn&#8217;t hold that many people, so odds are you&#8217;ll be sharing a table with other happy drinkers.

For those who want a memento, a shop next to the kitchen sells steins, glasses, books and even smokebeer chocolate.

Schlenkerla Old Inn, Bamberg, GermanyHours: Daily, except for Tuesdays, from 9:30 a.m. until 11:30 p.m. Kitchen meal times: Cold breakfast from 9:30 - 11:30 a.m.; Hot lunch and dinner from noon - 2:30 and 4:30 - 10 p.m.; Cold mid-afternoon fare from 2:30 - 4:30. Beer is no longer served after 11:30 p.m.Drinks: Award-winning, world-famous smoked beer.Prices: A rauchbier is 2,70. Soup will set you back 2,50 euros, pork knuckles 9,30.Clientele: Runs the gamut.English menus: Yes.Specialties: Beer, beer, beer.Dress: CasualDirections: Schlenkerla&#8217;s Old Inn is located at Dominikanerstrasse 6, 96049 Bamberg. The nearest parking is in the Rose Garden parking garage next to the tourist information office. From there, walk across the bridge and go right on Herrenstrasse and slightly right on Dominikanerstrasse. Schlenkerla is on the right.Telephone: 0951-56060Web site: www.schlenkerla.de