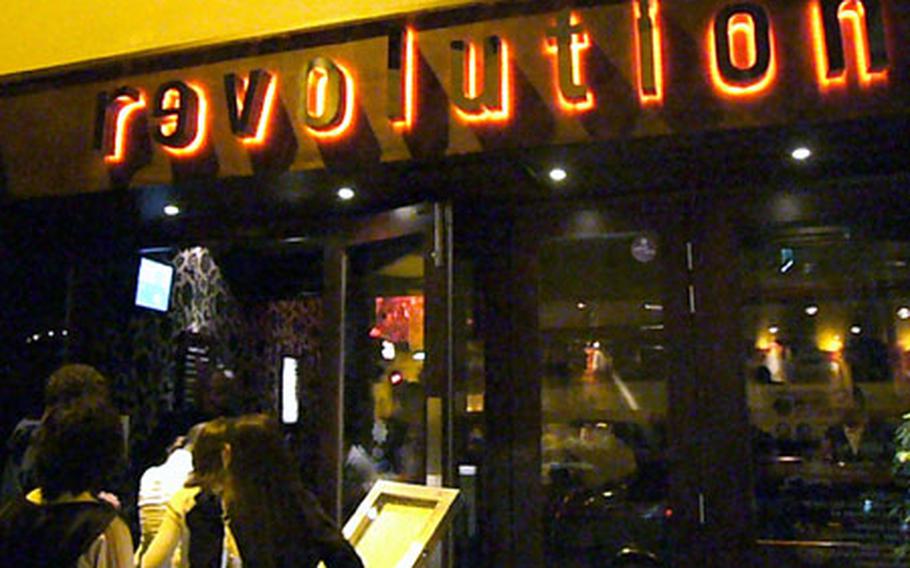 Outside the Revolution bar in Cambridge. (Sean Kimmons / S&S)

It&#8217;s the colorless distilled liquor, responsible for lingering hangovers but also many good nights. It has been around for centuries and it can be made from rye, wheat, corn or potatoes. And, both Poland and Russia claim to be its inventor.

Just like any other hard liquor, vodka has an acquired taste that can make almost every drinker wince when drinking it straight up. However, the Revolution bar mixes this fire water in numerous concoctions to eliminate the burn, and has premium vodkas that go down a lot smoother.

Found along Downing Street, where the old Rat and Parrot bar used to be, Revolution has an eclectic setting with dim lighting, revolving party lights and a big screen in the back showing random videos. Red fabric lamps that look as if they were taken from a brothel hang overhead, and the pillars are covered with velvety wallpaper.

The music on a recent weekday night was a fast beat dance mix played at a low enough volume for conversation, although parties at nearby tables could easily drown out both.

Using a dominant presence, bouncers in all-black uniforms and earpiece radios tried to set a relaxed and quiet atmosphere but were overwhelmed by the loud parties enjoying the vodka.

Belonging to a chain of about 50 other bars in the United Kingdom, the Revolution bar in Cambridge can come across as another overplayed trendy bar, yet to vodka connoisseurs it can be the next best thing to heaven.

The bar claims to offer more than 100 ways to drink the stuff, from straight or flavored shots, single or pitcher-sized cocktails or in potent martini concoctions.

Be prepared to wait for drinks on busy nights, though. It took almost 15 minutes for a bartender to make two dry martinis on a relatively slow night.

Besides a decent-sized seating area on its ground floor, there is also a nightclub upstairs and a rooftop terrace to enjoy drinks and smoke a cigarette or two.