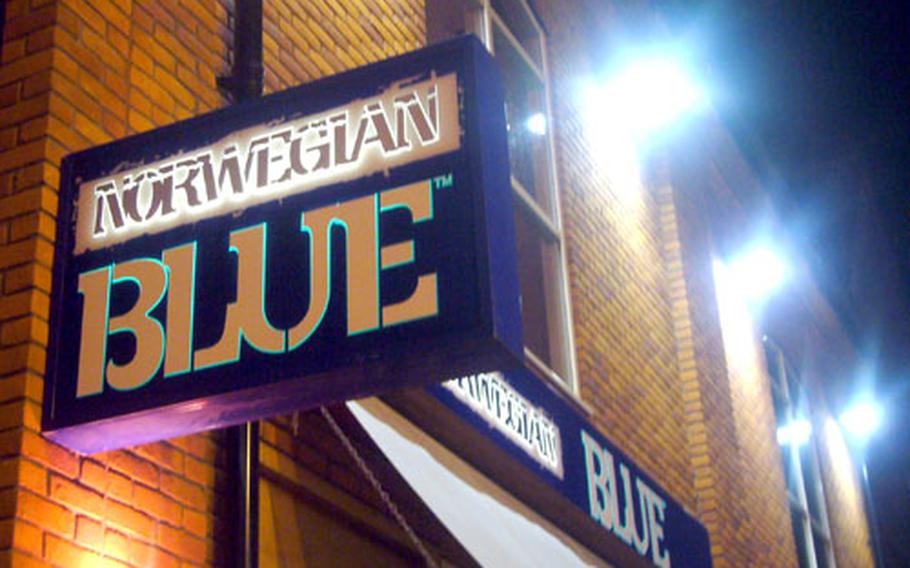 NORWICH &#8212; I had only one night in this Norfolk city near the North Sea about an hour&#8217;s drive from RAFs Mildenhall and Lakenheath, so I wanted to make it count.

Confused about where to go, I followed signs for the city center, took a left at the train station and proceeded toward some colored lights that I found out later were the Riverside District.

The district was filled with partygoers making their way to watering holes situated along the River Wensum. A bar named Norwegian Blue caught my eye, so I went inside to start off the night.

I was very impressed to see a waterfall, illuminated by red and blue lights, cascading from the tall ceiling down to a long bar. It was still early, so bar service was quick and convenient. As I waited for my pint to be poured, I looked up and noticed a second level with more seating.

My drinking companion and I ventured upstairs, plopped down on some leather chairs and enjoyed our beers. Small groups of Brits were at surrounding tables, including a few ladies wearing trendy shorts, a British fad that I will never get.

Art hung on the walls upstairs, where comfortable seating arrangements and a second bar dominated the rest of the area. In warmer temperatures, patrons can sit at tables on balconies overlooking the river.

In need of a refill, we headed downstairs to the main bar that had numerous bottles of wine, champagne and other spirits.

Hidden in a corner to the right of the bar, a disc jockey played popular British dance music, including hits from the States. I didn&#8217;t see a dance floor, but there was a small open space in front of the DJ booth that probably became one later on.

Later, we left to continue our journey through the district. By far, the Norwegian Blue was my favorite bar that night. Its ambience, space and decent music selection made it a good start to a long night. Maybe it&#8217;ll do the same for you.

Entertainment: There are live bands every other Thursday and a live DJ every Monday, Friday and Saturday night.

Drinks: A regular selection of draft and bottled beer and numerous types of spirits, wine and champagne. There also is a wide variety of cocktails.

Hours: The bar closes at 11 p.m. Sunday through Wednesday, and midnight Thursday through Saturday.

&#182;To find accommodations, restaurants, shopping and nightlife venues in Norwich, check out www.visitnorwich.co.uk. The Web site boasts an interactive map that allows users to explore the districts of the city and its surrounding communities.