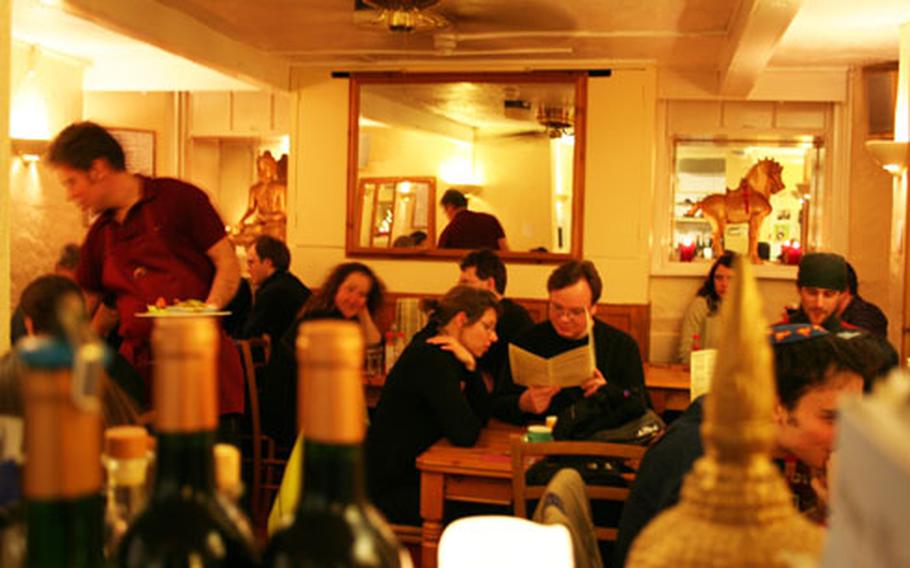 The downstairs dining room at Rainbow Cafe in Cambridge is small but comfortable. The simple table settings and candles add to the cozy atmosphere. (Courtesy of Rainbow Cafe)

At only 21 years old, the eatery is in its infancy compared to most of its environs, which date back 800 years. But this place has character, and, more importantly, a strong local following. Between devoted diners and good reviews from a few of Britain&#8217;s top food critics, Rainbow Caf&#233; definitely comes recommended.

Its claim to fame is as the only vegetarian restaurant in Cambridge. That&#8217;s right. I said it. Ve-ge-tar-ian. Yes, as in "no meat." I know what most of you are thinking. But before going on a "rabbit food" rant, you should give it a go.

It&#8217;s not necessarily a place for your devout "steak-and-potatoes" guy or gal. Just remember that vegetarian food is not reserved for granola-gobbling hippies.

While a few of the dishes on the international menu incorporate a meat substitute called Quorn, most are simply killer combinations of fresh vegetables and beans, rice and other carbohydrates.

It&#8217;s a philosophy that has fueled Rainbow Caf&#233;&#8217;s longevity over the years &#8212; not easy for a vegetarian restaurant to achieve in a country where bacon-wrapped sausage is a staple food.

What&#8217;s more, most customers are not vegetarians, just omnivores willing to forgo meat for a meal at the Rainbow, which, by the way, also serves up gluten-free and vegan dishes.

There&#8217;s a daily board that boasts seasonal specialties as well as most of the cafe&#8217;s desserts, such as a fig-and-cinnamon cheesecake and a chocolate truffle macaroon, just a few that appeared on a recent afternoon.

Meijland said the Latvian Potato Bake is the restaurant&#8217;s most popular dish. In fact, "there would be riots if we took it off the menu," she said.

All the dishes are somewhat eclectic and international. From the Libyan Cuscus Bil-Khoda to the Cuban Pecadillo, the food is inspired by countries around the world.

The restaurant prides itself on cooking with local produce and ingredients, and the food seems to reflect that. It&#8217;s fresh, colorful and tasty. Rainbow Caf&#233; also has a variety of specialty teas and organic beers and wines. Try the Elderflower Belvoir Presse, a mix of juice and bubbly water. Produced at a local farm, this drink alone is worth a trip to the Rainbow.

The restaurant has a casual setting and friendly, prompt service. Main meals cost from 8 to 10 pounds with desserts and starters ranging from 3 to 5 pounds.

With a prime location on one of Cambridge&#8217;s most bustling and scenic streets, Rainbow Caf&#233; is tucked away in a cellar down a narrow alley on Kings Parade, which almost feels wrong when you enter. But that&#8217;s the fun of it, trying something different. And it&#8217;s what should drive you to try a vegetarian meal, especially if it&#8217;s a foreign concept.

You might be surprised and realize your meal is not missing anything at all.