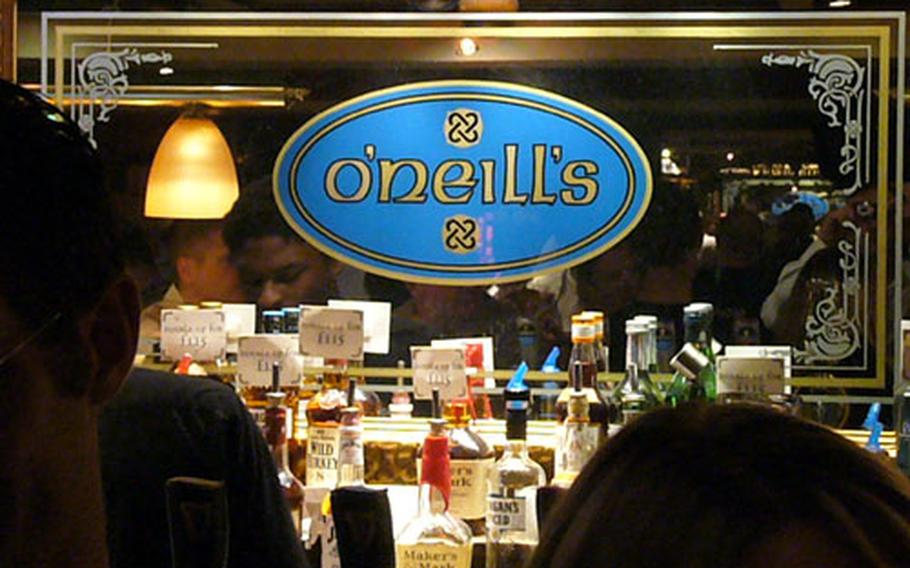 Yes, there’s a ton of O’Neill’s pubs throughout England, nearly a dozen in London alone, but this chain still offers cheap drinks, plenty of women and live house bands to get the fun started. The Oxford franchise is no exception. (Sean Kimmons / S&S)

Be it Chad Przybylski & The Polka Rhythms rocking your basement kegger or heavy-metal giants Mastodon serenading the crowd at your grandma&#8217;s 80th, live instrumentation easily adds another layer of sonic awesome to any gathering of people.

That was the case recently at O&#8217;Neill&#8217;s in Oxford. Yes, this is a chain, with nearly a dozen locations in London alone. But darn it, that house band. That brilliant house band!

The night started out a little slow &#8217;n&#8217; sloppy. Bored-looking women milled about with coiffed British lads, some of whom were dressed identically to celebrate a bachelor party.

But as the hours passed, the crowd grew more sociable, doors were opened to let in fresh air and the band took the stage, amping everything up that much more.

They probably had a name, but does it really matter? When it&#8217;s midnight on Saturday and the guys play The Killers&#8217; "Mr. Brightside" and "Seven Nation Army" by The White Stripes, along with other pop radio standards, you can&#8217;t help but tap your foot. Live guitar and drums just have that effect on some people.

Even though it&#8217;s a chain, each O&#8217;Neill&#8217;s is a bit unique. The bartenders serve up generous yet economical cocktails, and the Oxford joint prides itself on pouring a quality pint of beer while serving consistent, if by-the-numbers, pub food.

Did you know there&#8217;s a trick to it? They don&#8217;t do it like some Americans, where a little nose grease applied to an overly foamy head instantly dissolves said head. No, here they employ the "two-part pour" method.

The Guinness glass is tilted 45 degrees for the initial pour. Once it&#8217;s two-thirds full the pint is left to settle before being topped-up and presented to the thirsty patron.

While O&#8217;Neill&#8217;s hypes this as unique to their corporate family of drinkeries, during a year in England your intrepid Stripes reporter has seen this done at nigh on every pub he&#8217;s ordered a Guinness in.

What&#8217;s more, unless you can&#8217;t drink anything else, avoid the Guinness on a crowded Saturday night. In the rush of customers, the barmaid may just forget about your Guinness pint.

Details: A chain pub whose economical drinks and live cover bands ensure a good time 94.3 percent of the time.