After Hours: Ohashi is warm and classy all at once 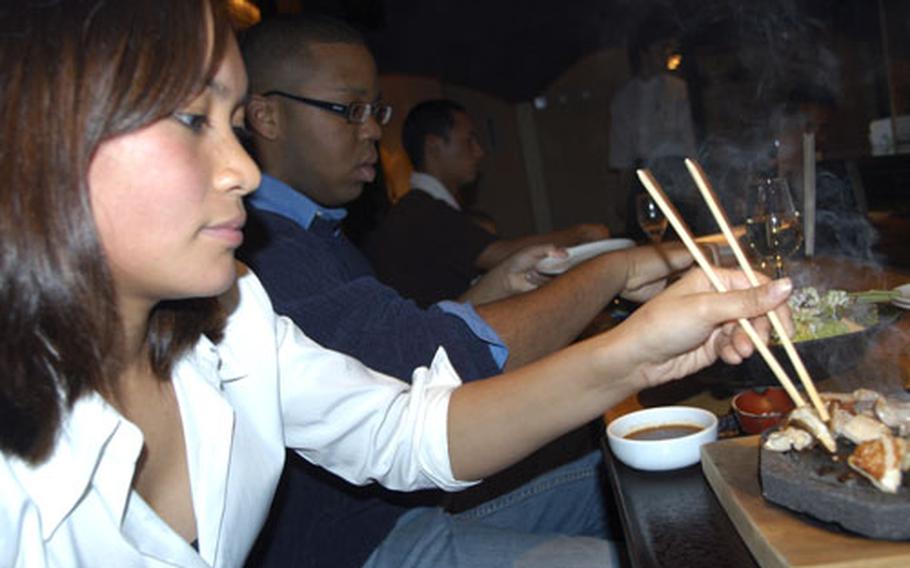 MISAWA, Japan &#8212; Let&#8217;s face it: There aren&#8217;t many restaurants in Misawa where you might feel awkward dining out for the evening in jeans and a T-shirt. This is northern Japan, where in winter, big, burly coats and rubber snow boots are fashion staples.

Ohashi, which means &#8220;chopsticks&#8221; in Japanese, exudes warmth. It feels at once upscale yet homey, like a cozy Japanese abode lavished with wood and aglow with soft lighting.

&#8220;The concept of our restaurant is the warmth of wood,&#8221; said manager Yasuyuki Ebisawa, noting the restaurant&#8217;s open kitchen with a counter that surrounds the irori, a traditional Japanese fireplace.

Williams was seated around the irori on a recent Sunday evening with a group of 14 Americans. The experienced Ohashi diner had organized the outing to celebrate the 21st birthday of her husband, Airman 1st Class Joshua Williams.

&#8220;This is one of our favorites,&#8221; she said of the restaurant, while flitting from couple to couple to assist with menu selections.

&#8220;We mostly eat a little bit of everything,&#8221; she said, choosing at least one meat, vegetable and appetizer.

Ebisawa, the manager, said customer favorites are the charcoal-grilled meats, shish kebabs and yakitori. Popular among Americans, he said, are the grilled beefsteak on a plate made from volcanic rocks. About 30 to 40 percent of Ohashi&#8217;s customers are foreigners, he said.

Plan ahead &#8212; reservations are recommended, especially for weekend dining.

Hours: Open for lunch from 11:30 a.m. to 2:30 p.m. daily except Sundays and holidays &#8212; but will serve lunch seven days a week beginning Feb. 1. Open for dinner seven days a week, On weekdays 5 p.m. to 11 p.m. and until midnight Fridays, Saturdays and on evenings before holidays.

Menu: Currently in Japanese and English. A new English menu will be available Feb. 1 with photographs of all items.

Clientele: All ages; about 30 to 40 percent are Americans and other foreigners.

Location: Go straight from Misawa Air Base main gate; turn right at the second traffic light next to city hall; take a right at the Y-intersection after the Suzuki clinic; restaurant is down the hill on the left.