After Hours: No Oxford Blues on Cowley Road 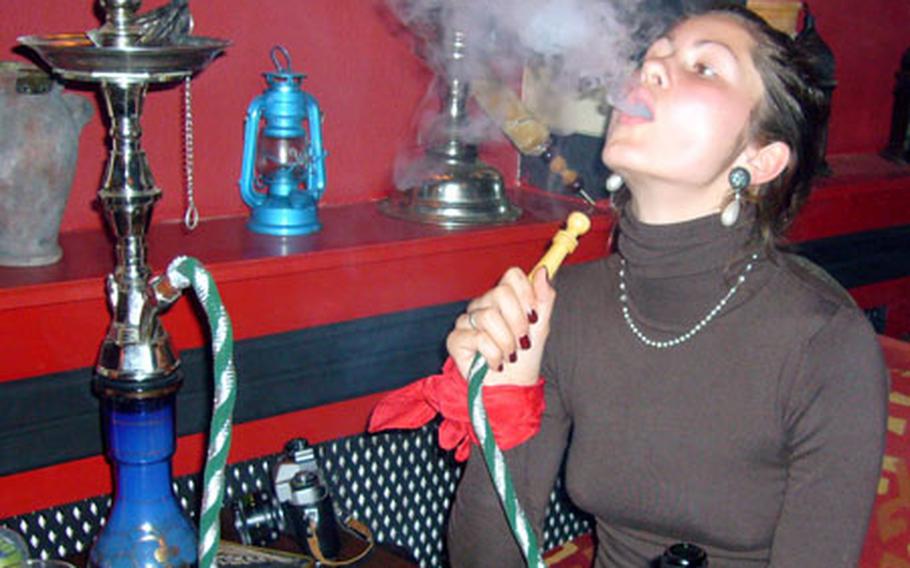 Guna Saulite from Latvia releases a puff of sheesha smoke at the Euphrates restaurant on Cowley Road in Oxford. Along with Kurdish and other regional dishes, the Euphrates features occasional belly-dancing acts. (Sean Kimmons / S&S)

OXFORD &#8212; It&#8217;s disturbing to think of what this writer&#8217;s legacy might be if he died or went missing after a recent Friday night/Saturday morning on Cowley Road in Oxford.

Left with only the contents of a small, green notebook to reconstruct the roving bar reviewer&#8217;s final moments, what would a pair of distraught parents have made of the increasingly enigmatic and illegible handwriting within?

In recovered photos they would see blades of colored light stabbing through disco smoke, a Spanish woman with a shiny face in bold close-up, and the blurry facades of various bars and nightclubs.

Some of the accompanying notes would have been troubling reading:

But through luck or chance these would not be the last echoes from a night on Cowley Road, where the notes were written. An outrigger of Oxford&#8217;s central warren of streets, it&#8217;s a long stretch of bars, restaurants and clubs that is not just survivable, but patently enjoyable and may be worth a look if you&#8217;re in the city.

With plenty of variety, a host of international eateries and a full range of age groups represented, it&#8217;s a good alternative to the teen-dominated chain bars and discos of the central area, where roving vessels of makeup and hair dye tend to congregate.

A good place to begin on Cowley is The Hobgoblin, a spacious pub with a mixed crowd of student types and local drinkers. Offering a goodly range of lagers and draught ales, its highlights included a foosball table &#8212; rarely seen in England &#8212; at one end and an inviting outdoor courtyard at the other, set with long picnic tables.

With a pre-dinner pint under the belt, move back toward town for a little something different at Euphrates, the Kurdish restaurant down the street, where the red walls and olive-peddling proprietor make an impression. Boasting a belly-dancing show when crowds are big enough and billowing with sheesha smoke, it&#8217;s an inviting locale with a range of international foods and bottled Greek and Lebanese beer on the menu.

Thus sated and ready to perform 16-ounce curls in earnest, The Bullingdon is an obvious next target, a large bar/club plastered in ads for live music and specials and reeking of sweat and cigarettes and beer.

Inside it was hardly the Ritz (the note about the tattooed man originated here) but it&#8217;s where the people congregate on a Friday. Most dancing and music events take place in the back half of The Bullingdon, the Backroom.

But half a club apparently wasn&#8217;t enough at the time, and so next on the list was the Zodiac, the echoing two-story nightclub at the far end of the road. Here a thumping late-night venue pulsed on two floors featuring vastly different types of music &#8212; early disco and fledgling hip-hop downstairs with drum and bass up top. Big, loud and more suited to cocktails and Red Bull than beer, its crowd had come and gone by the time the lights came on at 3 a.m.

Long, varied, and brimming with the potential to steer you in some strange and interesting directions (read: &#8220;Like being in a giant tent. Low light. Smell of fried food?&#8221;), Cowley Road in Oxford can be one to try.