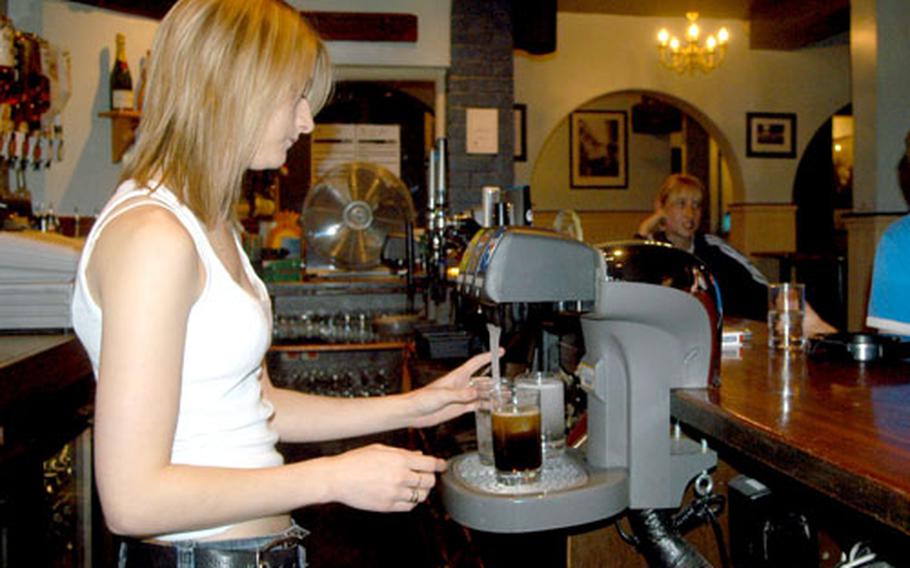 NEWMARKET &#8212; As I strolled along this town&#8217;s main drag, High Street, I ducked into a dark alley and saw blue lights beaming down from a nearby building. I looked up toward the lights and spotted a red sign: Temple Bar.

Yearning for a change from High Street&#8217;s other hot spots, often filled with loud and obnoxious 18-year-olds, I stepped into the Temple to pay homage to the beer gods.

When I headed to the bar to get my fix, &#8220;November Rain&#8221; came over the speakers while an intoxicated man, sporting tattooed arms, sat nearby and argued with friends.

Seconds later, a cold pint of Stella Artois was in my hand and I retreated to the comfortable setting at the back of the bar. I plopped down on a cushioned chair and enjoyed the last minutes of the classic Guns N&#8217; Roses song.

When I looked back at the bar, I saw bartender Donna Bray trying to keep up with a growing crowd on this recent weekday night, racing around behind the bar filling glasses with beers and various concoctions.

I then admired the walls, adorned with black-and-white posters of influential leaders, movie stars and musicians, including an autographed poster of Frank Sinatra&#8217;s mug shot when he was arrested in 1938 on charges of seduction and adultery.

Samantha Almond, who manages the bar with Justin Cover, said they refurbished the place when they took it over about 12 weeks ago. The walls are light blue and cream colored while the ceiling is dark blue. In the middle of the bar, a wooden floor becomes a dance floor when disc jockeys perform on Friday and Saturday nights.

On Sunday nights, the bar hosts live music, which can include rhythm and blues, jazz and maybe a Phil Collins tribute, Almond said.

Patrons become stars every Thursday night with karaoke, she said.

On these busy nights, people in their 40s and 50s also frequent the place.

Location: The Temple Bar is on Sun Lane, just off of High Street, Newmarket&#8217;s main drag.

Food and Drinks: No pub grub here, but a decent selection of spirits as well as draft and bottled lagers.

Ambience: On Thursdays, the bar holds a karaoke night; every Friday and Saturday night there is a disc jockey; and on Sunday nights there is a live band.