After hours: Near the winner’s circle The Waggon & Horses has outdoor curbside seating, a simple menu and a rustic interior. (Mark Abramson/S&S)

The Waggon & Horses has outdoor curbside seating, a simple menu and a rustic interior. (Mark Abramson/S&S) 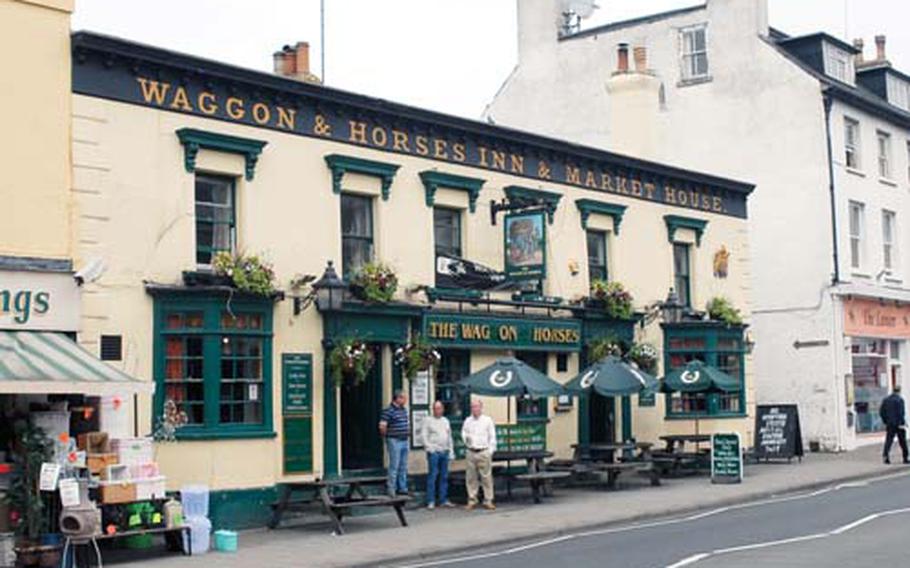 The restaurant is located on Newmarket’s main drag. (Mark Abramson/S&S)

The Waggon & Horses Inn & Market House is packed this time of year with race fans watching the local action, races from Cheltenham and elsewhere on one of the eatery&#8217;s many flat-screen tellies.

Fans and diners can be couch potatoes on one of the restaurant&#8217;s red sofas or just kick back in one of its wooden bench-seat booths. The establishment also has curbside seating in front on tables with umbrellas to protect against the sun on the rare occasions that it comes out in the United Kingdom.

The interior has a stable feeling with its wooden beams, pictures of horses adorning the walls, and reins and saddles hanging near a fireplace. The lunch hour on a recent trip was filled with people moseying up to the bar like horses to troughs to glimpse the racing action.

Signs posted outside the yellowish-cream-colored establishment tout its Tuesday quiz nights &#8212; a U.K. favorite that tests patrons&#8217; knowledge on a variety of subjects. The eatery also advertises contests with a chance to win a Polo shirt or a gallon of beer.

When the horses aren&#8217;t running, The Waggon & Horses shows other sports on Sky Sports.

The menu is simple, but it has a little variety, from the traditional sausage and mash and egg breakfasts to Mediterranean chicken smothered in a red marinara sauce. There are also panini sandwiches and scampi, as well as carvery on Sundays. Prices seemed reasonable with items ranging from 3.50 pounds to 6.50 pounds. Bring cash though, because The Waggon & Horses doesn&#8217;t take credit or debit cards.

The Mediterranean chicken was tasty, but a little paltry on the portions. And it came with more than enough french fries &#8212; or chips as the Brits call them.

The Waggon & Horses has a large bar with a variety of drinks, from Greene King microbrews to the more mainstream beers such as Stella Artois, Fosters and Carling. It also has a variety of wines.