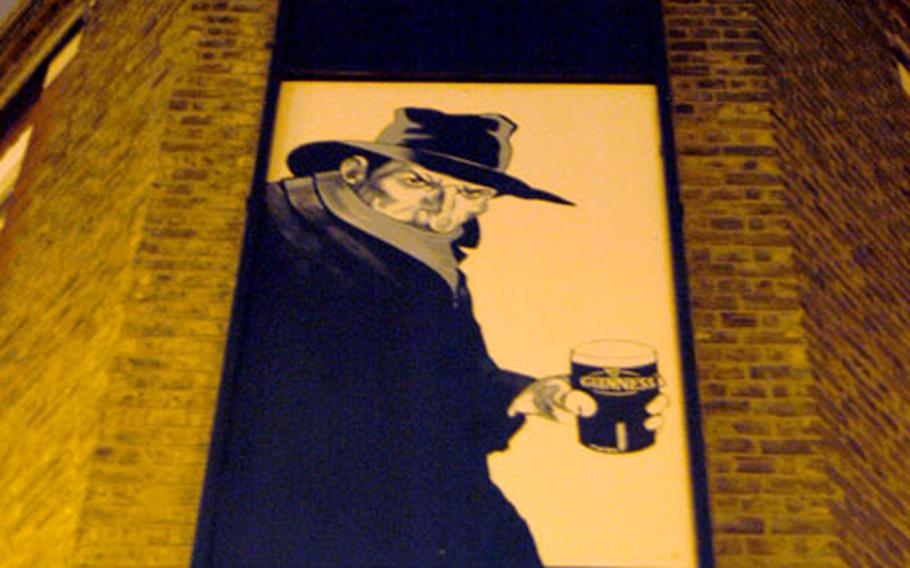 LONDON &#8212; You can tell a lot about a bar by the name it does business under and the sign above the door.

Any place featuring livestock or a member of royalty in its moniker is likely to offer lots of wood paneling, sparse lighting and furniture older than the Constitution.

But standing in front of a dark little corner joint called Filthy MacNasty&#8217;s Whiskey Cafe, with the picture of a nefarious-looking man peering down at you under the brim of a fedora, it&#8217;s hard to know what&#8217;s inside.

One can picture a disheveled little wreck of a bar with peeling walls covered in spray paint and broken glass on the floor. The kind of place where leather pants and facial tattoos are standard attire and the mere thought of ordering anything more complicated than a shot of bourbon is reason enough for the bartender to stab you. With her Mohawk.

But Filthy MacNasty&#8217;s, while a refreshing departure from the Olde Fox and Hounds, doesn&#8217;t go quite that far. A short walk from the Angel Undergound station in Islington, it is a local temple of stiff drinks and hard rock, where torn jeans and an afternoon hangover are welcome and the live music is always free.

When one enters from Amwell Street, it looks, at first glance, improbably small. A long bar with scant seating dominates a room decorated with the signed posters of famous musicians who have spent time there: Shane McGowan from the Pogues. Members of the Buzzcocks. The Libertines, original band of drug-harried British rocker Pete Doherty, now of Babyshambles, played early gigs in Filthy&#8217;s.

Painted deep, brick-colored red, it almost has the feeling of an American-style bar prone to pumping a lot of George Thorogood out of the speakers, but with none of the grit or debris implied by a name like MacNasty&#8217;s.

The place is clean and friendly &#8212; it even offers a lunch menu of Thai food Monday to Saturday, with a traditional roast on Sunday.

And the deceptively small front area of Filthy&#8217;s is only the half of it. Accessed through a small door to the left that leads to the men&#8217;s toilets is the rear lounge area of the bar where the music is played. It&#8217;s also draped in red and, while not huge, harbors more seating for patrons.

But the bar has a strange music license that only allows two musicians to play at any time, and even on weekends they have to be done before 11 p.m., according to one manager.

It&#8217;s also a tad isolated, about a 10-minute walk from Angel and pretty much alone in terms of nighttime venues within apparent spitting distance of its front doors.

Still, there&#8217;s no denying how much character the place has, including the bartender on a recent weeknight, a friendly 30-something woman adorned with a chain heavy enough to tow a Mazda and a pink head of hair as bright as a chemical fire.

The White Stripes wailed over the speakers even when the place was empty, and the bathrooms are painted in a whorl of pastel images, sprinkled with added graffiti. A little out on its own in more ways than one, Filthy MacNasty&#8217;s can be a dirty pleasure in London.

Entertainment: MacNasty&#8217;s forte is live music, and it features regular gigs in its lounge. Check www.filthymacnastys.com, for show times.

Food: Filthy&#8217;s serves lunch from a Thai menu Monday to Saturday, with a traditional roast on Sunday.

Hours: The bar keeps traditional hours, closing down at 11 p.m., even on weekends.

Clientele: North London locals and a mix of music lovers from around the city