A tray of dips to go along with the papadums. (Bryan Mitchell / S&S)

A tray of dips to go along with the papadums. (Bryan Mitchell / S&S) 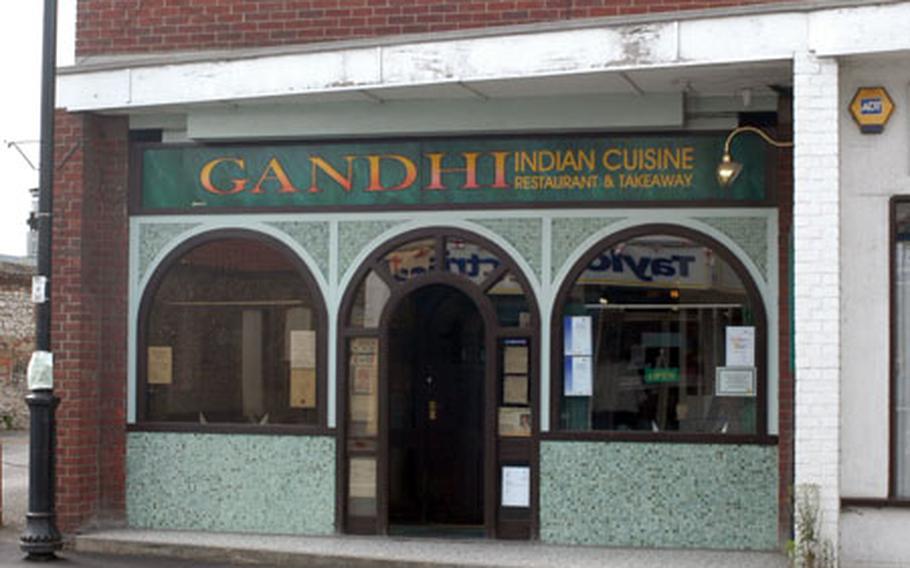 Two cooks from Gandhi restaurant peer out from the window separating the dining area from the kitchen. (Bryan Mitchell / S&S)

MILDENHALL &#8212; Mexican restaurants have their chips and salsa. Middle Eastern eateries can&#8217;t go without their pita and hummus.

And Indian restaurants, well, they have papadums and a tray of dips. Or so I learned during a recent night out with British friends at Gandhi, a neighborhood Indian establishment.

The papadum is a thin wafer indigenous to South Asia normally made from lentils or chickpeas, and either flour or rice. It looks and tastes much like a toasted cracker, minus the salt.

It&#8217;s served warm, with a tray of four dips. At the Gandhi restaurant, that means a yellow mint sauce, a red lime picot sauce, an orange mango sauce and an onion salad.

More than one of the sauces are, shall we say, acquired tastes. But ordered as a safe appetizer, they offer a quick glimpse into the ingredients key to Indian cuisine without the obligation on downing an expensive platter of fire-hot chicken and rice.

But don&#8217;t expect the wafer-thin papadums to come fast and furious alongside free beverage refills. Both a second round of papadums and drinks will run your tab up quick &#8212; so go ahead a sip that soda and savor every papadum bite.

But it&#8217;s more than the popular papadums that keep Gandhi busy. It&#8217;s also a menu brimming with variety and a staff quick to place an order, cook up a dish and clear a table.

You can get a meat entree with enough spice to heat a nearby flat or a rice-and-veggie dish brimming with natural flavor.

It&#8217;s that type of commitment to culinary excellence combined with a choice location on Mildenhall&#8217;s main drag that has led Gandhi to become a fixture in this Suffolk town.

The restaurant has been serving up curry dishes to hungry East Anglians for nearly 30 years, and shows no signs of slowing any time soon.

During my most recent visit on a weekday afternoon, the restaurant was largely vacant, but during a weekend night a larger party had better call ahead for reservations.

And there you have it. Papadums and a scarcity of seating; that should be enough to create a buzz.

Clientele: Indian people eat there, so you know it&#8217;s authentic.