After Hours: Fun is bar’s goal 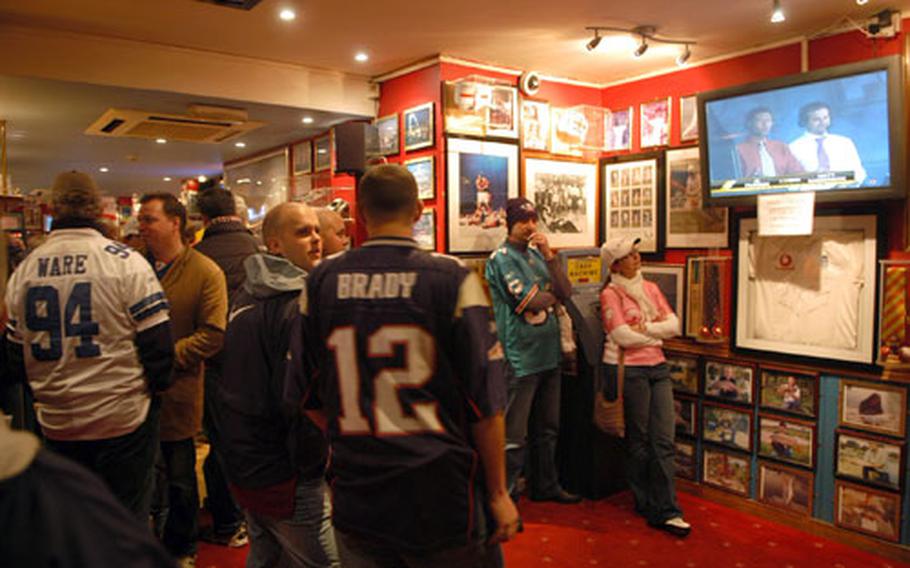 LONDON &#8212; The first regular-season National Football League game to be played outside North America had just ended and tens of thousands of fans were being herded out of Wembley Stadium.

Instead of heading home, some fans flocked to the nearby First Class Sports Bar, following the close, but lackluster, Miami Dolphins and New York Giants matchup on England&#8217;s most beloved sports field.

The main bar, with its red walls covered in sports memorabilia, was packed with fans drawn to its big- screen TVs broadcasting other NFL games.

A small bar near the front door was shut down, probably to clear up congestion along its hallway, which headed outside to a huge white tent with ample seating, more big screens and a bar with lines of thirsty patrons. The tent and main bar boasted a total of six plasma big screens as well as two TVs.

There were just a few beers on tap, yet many of the patrons didn&#8217;t mind until the Guinness kegs ran dry. It didn&#8217;t get too out of hand, though, as only a few drinkers gave a disappointed look at the bartenders, then settled for another brand.

Glancing around the tent were tables with jersey-clad fans hollering at the 52-inch plasmas or arguing which NFL quarterback was the greatest of all time.

He expects the place to be even more chaotic Nov. 21 when Croatia meets England for a European Football Championship 2008 qualifying match at Wembley, whose iconic arch can be seen from the bar&#8217;s front windows.

When the stadium isn&#8217;t hosting matches, the bar is equipped with Sky Sports channels that showcase many other sporting events in the U.K. and the States. Patrons can request American sporting events, if they&#8217;re being played on those channels.

Hundreds of pieces of memorabilia from numerous sports fill the main bar&#8217;s walls and help set an unusual atmosphere not often seen in English pubs and bars.

Doherty is fond of the bar&#8217;s Glasgow Celtics&#8217; football collectibles. There are also items from the England football team, and a jersey signed by the 2003 Rugby World Cup-winning English squad.

To get your sports fix while in London, step into this first-class sports bar, capable of seating 300 fans.

Location: 125 Wembley Park Drive, London, HA98HG. It is 200 yards away from the Wembley Park Underground station. Turn right at the station&#8217;s exit.Drink: Beer is its staple drink. Guinness, Carling, Grolsch, Strongbow and Worthington Cream are all on tap.Food: None &#8212; patrons are invited to bring their own food.Clientele: Sports fans of all kinds.Hours: Open every day from noon and closes about midnight, depending on the flow of business.Cover: No charge to enter.