After Hours: For all the cowboys in London 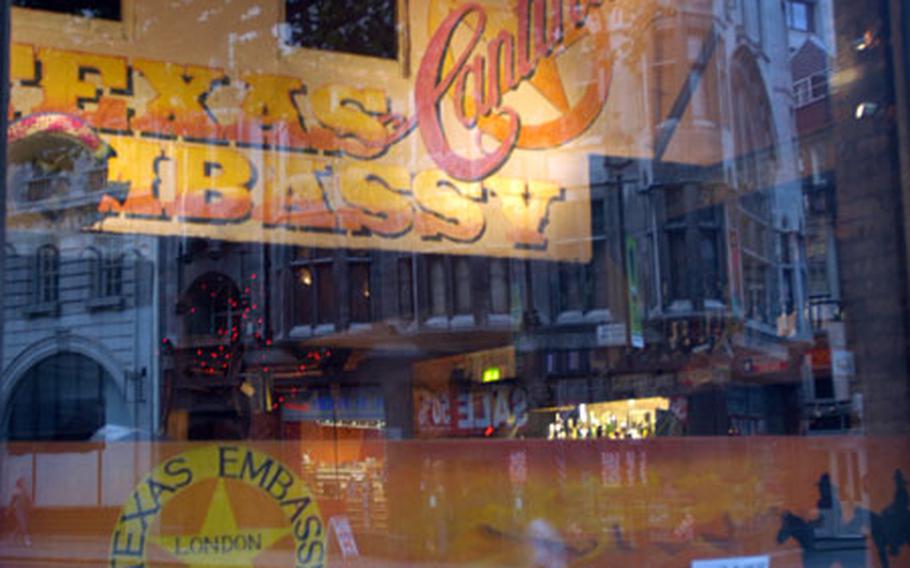 The buildings surrounding the Texas Embassy Cantina reflect off the glass front of the central London restaurant. The cantina is located one block north of Trafalgar Square. (Bryan Mitchell / S&S)

The buildings surrounding the Texas Embassy Cantina reflect off the glass front of the central London restaurant. The cantina is located one block north of Trafalgar Square. (Bryan Mitchell / S&S) 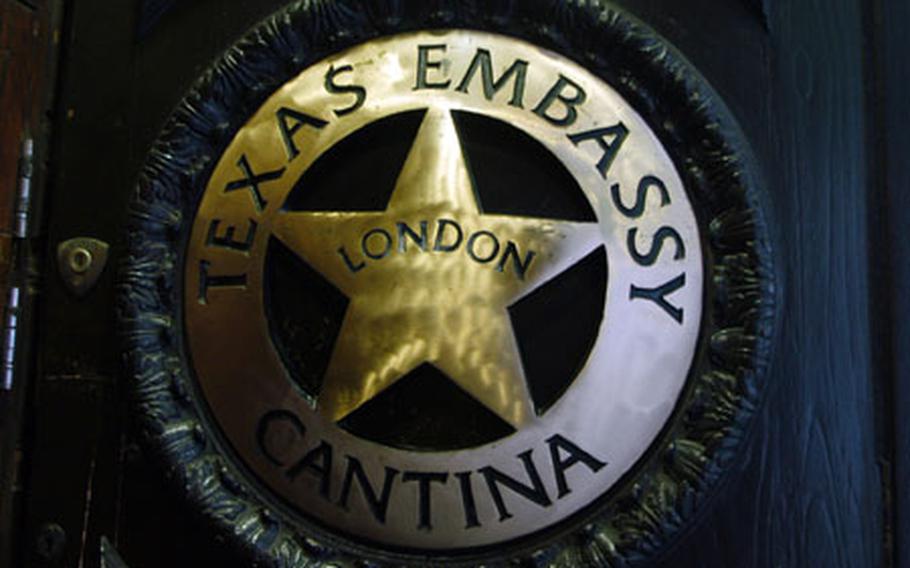 A shield for a sign welcomes guests to the Texas Embassy Cantina. (Bryan Mitchell / S&S)

It&#8217;s just the introduction to the Texas Embassy Cantina, arguably the capital&#8217;s most American-style eatery, just a block from one of England&#8217;s most revered landmarks.

Spoiler alert: The cost of a ribeye steak or enchiladas de puerco is way pricier than what you might find in El Paso or Nacogdoches. A couple of beverages and dinner platters for two may put you back a C-note.

But indulging every so often in a succulent steak or simply sharing a fajita platter is warranted if the dining experience is as memorable as a trip to the Texas Embassy Cantina.

First, getting there from Suffolk isn&#8217;t easy, but not overwhelmingly difficult either.

By car, only the most intrepid dare navigate the labyrinth that is central London and a night out could easily be spoiled by congestion frustration or worse.

In short, take the tube to Trafalgar Square and walk exactly one block north, that is, away from the River Thames.

The cantina is housed in a several-story white stone building that is a close facsimile to many of the impressive structures housing foreign embassies nearby. So it doesn&#8217;t leap out at the hordes of passing pedestrians with kitsch gimmicks such as faux water troughs for horses or racks to holster firearms.

The building comes with another bit of history: It once was the home of the White Star Line, owner of the Titanic. When the luxury liner sank in 1912, relatives and friends of those on board came to this building to scan lists of survivors, according to the cantina&#8217;s Web site.

Inside, the restaurant opens to a spacious main dining hall with seating for well over 100 as well as a full bar. The kitchen, like in many American restaurants, is an open-air affair in the back of the restaurant in full view of the patrons.

A second-story hall has room for at least another 100 guests and is normally packed on the weekends, when management suggested calling ahead for reservations for any party over two.

A Lone Star State-sized restaurant crowded with patrons, even with the insane amount of dining competition in nearby SoHo and Mayfair, means the food has to be good. And it is.

The beef and chicken fajita combo was sauteed to sizzling perfection and the guacamole, sour cream, refried beans and rice were all served fresh and to temperature. And, in a welcome relief from normal British dining tradition, refills on soda were free and plentiful.

All told, Texas Embassy Cantina is one of the few can&#8217;t-miss restaurants for American living in Britain.

Location: 1 Cockspur St.Drinks: Full barFood: Tex-Mex dishes served hot and freshAmbience: As close as you can get to Waco without leaving WestminsterSpecials: Call ahead (02079-250077) to see if any are offeredHours: Noon until late, according to the Web site, seven days a weekWeb site:www.texasembassy.com

The Republic of Texas declared independence from Mexico in 1836. That same year, the republic established an embassy in London, as well as diplomatic centers in Washington, D.C., and Paris.

Texas remained an independent country until 1845. The next year, the United States annexed Texas.

The Texas embassy in London was located in the Berry Brothers wine store on St. James Street, which is only a few blocks from the current Texas Embassy Cantina.

Even in the mid-19th century, Berry Brothers was a somewhat noteworthy liquor store in that it was opened in 1730.

A plaque hangs today marking the spot where the Texas delegation pursued its international interests with their British counterparts.