After Hours: For a night of soccer, you wouldn't want to be any closer than at Abbey Stadium 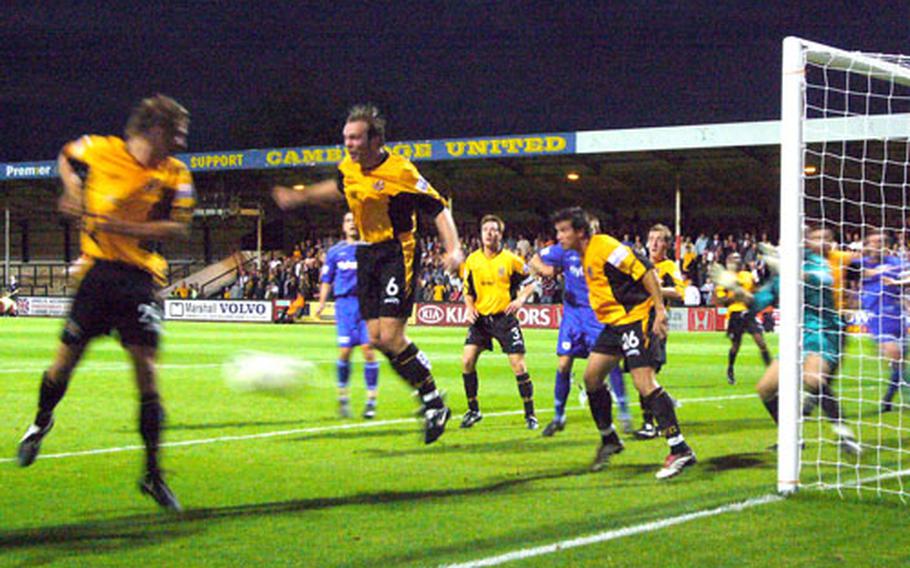 Cambridge defenders, in yellow and black, fend off an incoming corner kick from a visiting Exeter player in a recent game at Abbey Staduim in Cambridge. The home team lost the match 3-1. (Sean Kimmons / S&S)

Cambridge defenders, in yellow and black, fend off an incoming corner kick from a visiting Exeter player in a recent game at Abbey Staduim in Cambridge. The home team lost the match 3-1. (Sean Kimmons / S&S) CAMBRIDGE &#8212; You know you&#8217;re close to the action at an English football game when you can hear the players&#8217; feet scuffle on the grass, see the goalie tip a wink to a defender, or even get to touch the ball.

For many Americans in England, professional football is a sport mostly seen on TV or the nosebleed seats at a massive arena, far away from the grunting and jostling and yelling down on the field.

But standing on the edge of the pitch at the Cambridge United Football Club&#8217;s home field, even a casual soccer fan can pick up details that make the game more immediate: the sound of the ball as a shot whistles in, the swearing of players at both teammates and opponents, the speed at which the game is really played.

But football in England is not just a Saturday afternoon affair, and for airmen looking for a change of pace for a night out, a game at Cambridge&#8217;s Abbey Stadium can fit the bill.

Sure, no beer is allowed, and you&#8217;ll likely have to stand. But every once in a while it can be cathartic to trade in a normal, quiet dinner at a homey local pub for two hours of standing outside, screaming profanities at men in shorts.

Part of the draw is the mix of the club&#8217;s fans and its standing in the English league system. As a member of the Conference National League, several levels below the vaunted Premier League, the club is big enough to draw a healthy crowd on a Friday night but small enough to allow viewers to show up at game time and find a spot with a good view.

And like football fans all over England, Cambridge&#8217;s supporters are passionate about their team. Many know the players&#8217; names and rebuke or cheer them on individually throughout the game, while chants from the younger portion of the crowd are a near-constant fixture.

It&#8217;s good to set out a little early for the game because parking is a bit of a monster.

On Newmarket Road just on the edge of the city, Abbey Stadium doesn&#8217;t have any large, clearly defined parking area, so the accepted method seems to be to troll the side streets around the club for an open spot.

Once parked, however, viewers can just stroll right up to the ticket booths along Newmarket Road to get into the cheap seats (well, standing area) with the home team, or skirt around to the side to purchase a place to sit.

Weekday evening games at home generally start at 7:45, with the standing area, called the terrace, costing a tolerable 12 pounds for entry. Seats along the sidelines can be bought ahead of time for 15 pounds.

Location: Abbey Stadium is on Newmarket Road (the A1303), just after the second roundabout after leaving the A14.

Food and Drink: There are some stadium snack vendors in front of the main gates at the north terrace and a food booth just inside with hot dogs and the like, but no beer is sold in the arena.