After Hours: Five Bells not fancy, but it's inviting 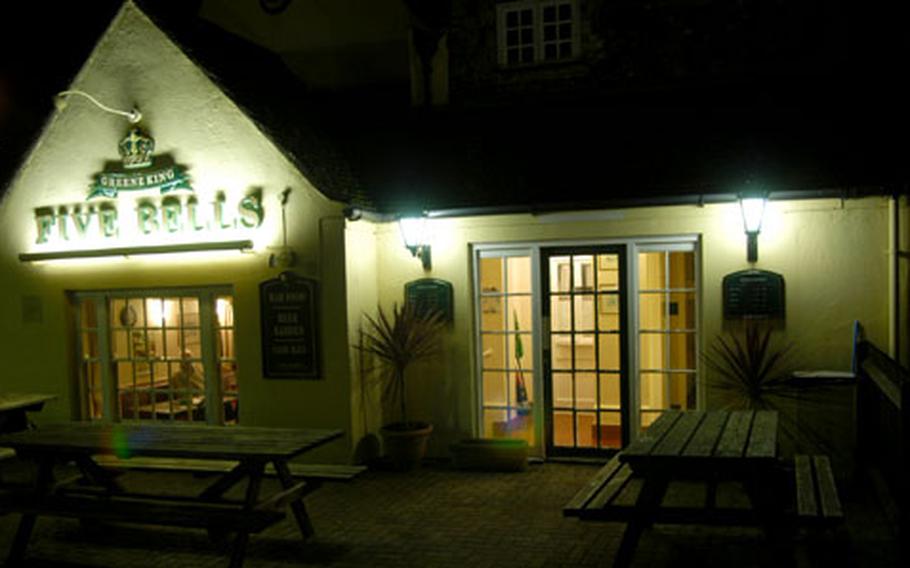 BRANDON &#8212; In the smoky, muted, wood-and-leather universe of pubs in England, there are a number of categories of the ubiquitous grub-and-ale vendors.

There are large, grandiose establishments slinging mounds of franchise-kitchen pies and chips under bright lamps and soccer highlights. There are the gloomy, eons-old rock piles specializing in opaque beers and tweed-clad clientele, full of shadows and whispers.

Then there&#8217;s a middle-ground pub like the Five Bells in central Brandon, a small but bright and inviting little tavern in the pedestrian market area of the village.

A basic place in many ways &#8212; from beer selection and decor to seating options &#8212; it serves for a local in need of a winter warmer in a quiet environment or a place to hunker down for a meal.

For the most part, the Bells embodies simplicity. Few adornments hang on the walls and beams, there are a scant number of tables and each of the two window-size bars in the place is less than 10 feet long. There&#8217;s no TV, and even the Nirvana and Guns N&#8217; Roses on the sound system on a recent night were played so low that they were little more than background noise.

Set on a corner in the middle of the town, the Five Bells is split into two distinct halves, the public house on one end and the &#8220;saloon&#8221; on the other.

It&#8217;s in the latter that new owner Marie Marenghi plans to serve most of the meals on the new menu for the pub, which closed its kitchen for about two months while she cleaned and refurbished it after taking over in October.

On Monday, the Five Bells was scheduled to be open for meals again with the new kitchen, though Marenghi was still working out the menu as late as last week.

Her plan, she said, is to have a static menu of small, snack-size options such as sandwiches and baguettes always on hand, supplemented by a rotating menu of main-course dinners that will feature everything from Mexican and Italian to the standards of English cuisine. Homemade soup is likely to be a staple, she said.

Marenghi, a years-long Brandon resident originally from Edinburgh, also is establishing a schedule of events at the Bells, including a quiz night on Wednesdays, occasional karaoke and a charity event this Friday where patrons bet on horse races.

The overall effect is a middle-of-the-road bar with an easy atmosphere and a dearth of accessories, both in front of and behind the bar (it&#8217;s Greene King ale and a small raft of standard lager choices only). It&#8217;s not the place you&#8217;d go with a raucous band of bar-hoppers or a carload of screaming kids, but for a small, quiet and close encounter, it works.

Location: In the middle of Brandon on Market Hill, at the intersection of Bury, London and Thetford roads and High Street.

Drinks: Few and standard, as far as beer and ale go, with England-standard lagers and some lonely Greene King Ale taps.

Food: In flux at the moment &#8212; the Five Bells&#8217; new menu was still in the works up to the re-opening of the kitchen Monday. Expect a choice of staple snack-size foods and pub favorites with a rotating menu of specials for full dinner options, management said.

Clientele: Locals haunt the tables in the pub, where a homey, hushed ambience prevails. Slightly older but reputedly friendly crowd.