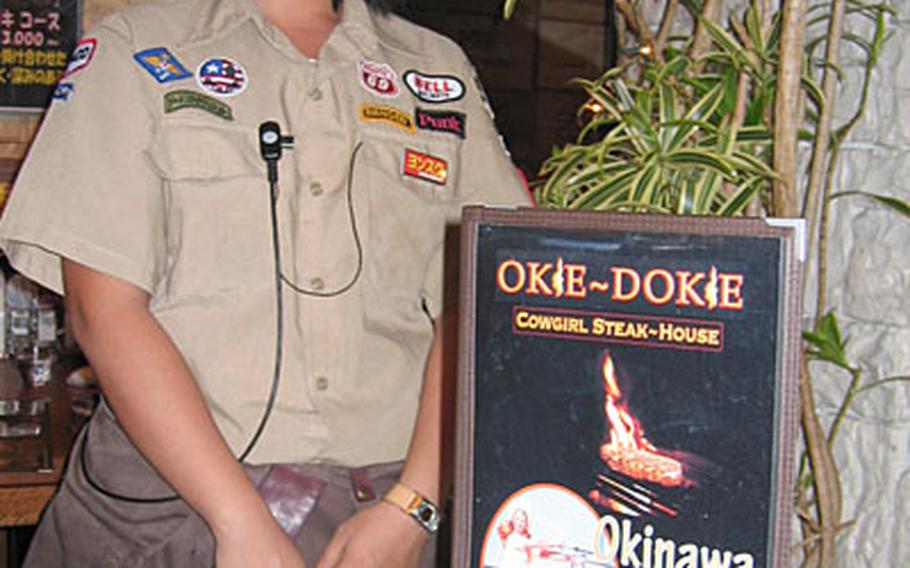 The Okie-Dokie Steak House on Kokusai Street in Naha, Okinawa, is staffed by waitresses in cowgirl uniforms. (Cindy Fisher / S&S)

Chicken garlic steak, hamburger steak, top sirloin steak, filet steak &#8212; they even have a steak for kids. Overhead, ceiling fans gently stir the air &#8212; the better to waft the smell of beef throughout the room &#8212; as cowboy hat-clad waitresses roam among the wood-top tables. The d&#233;cor takes a stab at American western saloon, but misses the mark due to its strong Japanese overtones.

Staff uniforms do play up the theme and patrons are encouraged to &#8220;take a picture with our cute cowgirls.&#8221;

Our &#8220;cute cowgirl&#8221; server spoke enough English to make communication easy, and menus with a mixture of Japanese and English along with plenty of pictures were helpful, too.

The steak wasn&#8217;t so great that I would suggest making a trip to Naha for the restaurant alone. However, if you are already on Kokusai Street for the shopping, Okie-Dokie is good for a quick bite to eat, though it&#8217;s a little pricey.

The steak was just OK, but my dining companions raved about the sake. However, unless you want to wind up under the table, they suggested cutting it with some water before drinking.

So, if you&#8217;re on Kokusai Street when hunger hits, the Okie-Dokie is OK. Just follow your senses. The bright yellow Okie-Dokie sign, speakers blaring the name on the sidewalk and the smell of steak wafting on the breeze make it hard to miss.