The sign hanging in front of The Black Boy. (Bryan Mitchell / S&S)

The sign hanging in front of The Black Boy. (Bryan Mitchell / S&S) A sign in The Black Boy pub. (Bryan Mitchell / S&S) 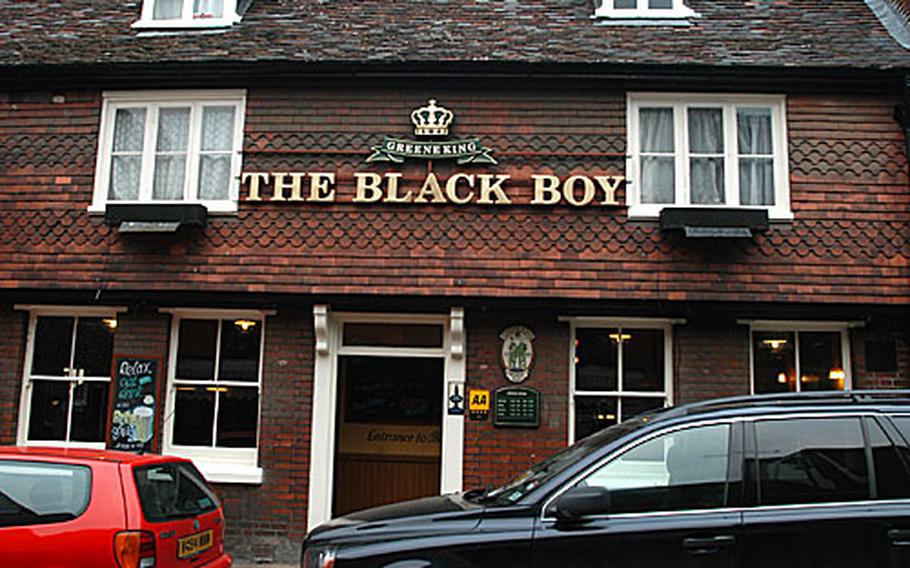 The Black Boy was founded in 1683 as a horsing stable that also served beer. (Bryan Mitchell / S&S)

BURY ST. EDMUNDS &#8212; There are more than a few pubs out there that, at first glance, are difficult to articulate as in any way unique: the same staple of imported beers on tap, the same cloud of stale cigarette smoke, the same photo of the pub football club after last season&#8217;s signature win.

Halfway through a pint at The Black Boy, and it appeared this quaint public house fit that bill, complete with a sign advertising Sunday&#8217;s quiz night and a snooker table, to boot.

But there has to be something to separate this pub from the dozens of others that crowd Bury&#8217;s charming streets.

Then I asked what appeared to be the handful of regulars crowding the bar how it came by such an unusual name and all appearances of &#8220;just another pub&#8221; fell as flat as the Suffolk countryside.

Founded in 1683 as a horse stable that also served beer, the pub originally was known as A Black Boy, which the pub&#8217;s clientele acknowledged was a tad inappropriate for today&#8217;s politically correct age.

Sometime in the past several decades, the pub altered its name to The Black Boy and included a picture of a colorfully dressed youth covered in chimney soot.

In one small change of a name, the place transformed itself from perceived racist pub to charming watering hole where one likely could find a Dick Van Dyke&#8217;s Bert-like character of &#8220;Mary Poppins&#8221; fame relaxing his singing voice with a quick pint.

At more than 300 years old, the pub claims to be the second oldest watering hole in Bury St. Edmunds. I asked if there are any original pieces to the structure, and the patrons pointed to the wood beams supporting the ceiling.

Little did the building&#8217;s engineers know that hundreds of years after the central beams were installed, thirsty patrons from a country yet founded would appear to ask silly questions, such as, if there were any way to count the number of pints consumed in the pub since 1683.

Drink: A familiar selection of European beers on tap.

Clientele: This place is as local as the nearby Abbey Gardens. Don&#8217;t expect any chatter over the lack of upsets in this season&#8217;s Final Four.

Hours: Opens at 11 a.m. and closes when the landlord feels it&#8217;s time to push the last drinker out the door.