After hours: Better at the beach 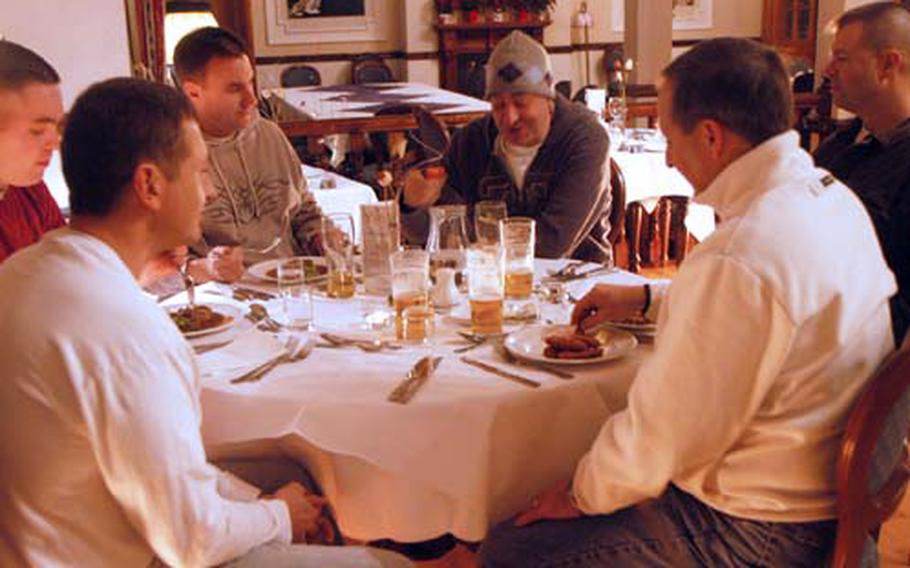 Sailors from Naval Station Norfolk in Virginia have a meal at La Rochelle. (Charlie Reed / S&S)

NEWQUAY, CORNWALL &#8212; If you arrive in this beach town between lunch and dinner, finding something to eat can be daunting.

Do you grab a pasty and have a late bite once the restaurants reopen for dinner? Or perhaps just go for fish and chips &#8212; a very snack-like meal &#8212; in lieu of a proper sit-down experience?

Well, if you&#8217;re staying at Hotel Victoria &#8212; a popular haunt among sailors and visitors to nearby RAF St. Mawgan &#8212; hit the hotel restaurant La Rochelle. Serving classic French cuisine, the restaurant is magnifique.

The three-course menu changes daily and incorporates locally obtained ingredients whenever possible. With an appetizer, entr&#233;e and dessert costing about 20 pounds, it&#8217;s not cheap, but well worth the money.

"It&#8217;s a great restaurant," said Master Chief Sean Reece, a member of the Joint Maritime Facility at RAF St. Mawgan, home of the last U.S. Navy contingent in the U.K. "It&#8217;s good. Everybody raves about it."

The food is prepared superbly and only enhanced by the friendly staff, who don&#8217;t rush diners and time the courses flawlessly.

A recent winter&#8217;s eve menu included a starter of smoked fish with warm potato salad, which tasted much better than it sounded. The flavors complemented each other nicely, and it was just enough to properly whet the appetite. Braised beef with onion gravy served with a hearty portion of traditional British vegetables followed. The meat was so tender it rendered a knife unnecessary.

While La Rochelle is technically French, it&#8217;s not uber-French, which makes its menu more appealing to the masses who pass through the hotel. It&#8217;s good, fresh cooking vs. overly sauced hoity-toity fare.

"We usually try to keep a nice meat-free pasta dish on the menu for vegetarians," said one of the restaurant&#8217;s affable servers, who just happens to speak French. "The chef will even whip something up if there&#8217;s absolutely nothing on the menu that suits someone&#8217;s tastes."

For a hungry group of sailors who happened to be dining at La Rochelle on a recent evening, the restaurant was second-to-none.

"This is one of the better places in Newquay," said a junior noncommissioned officer who was stationed at St. Mawgan a few years back.

Pronounced "New-Key," this beach town along the craggy Cornish coastline is considered the European surf capital. Its annual surfing competition in August draws surfers and tourists by the thousands.

As you would expect in a touristy town like Newquay, there are a lot of restaurants that try to lure would-be diners in with glittery signs. Not La Rochelle. It&#8217;s understated, but good.