After Hours: Be bullish on Fairford pub 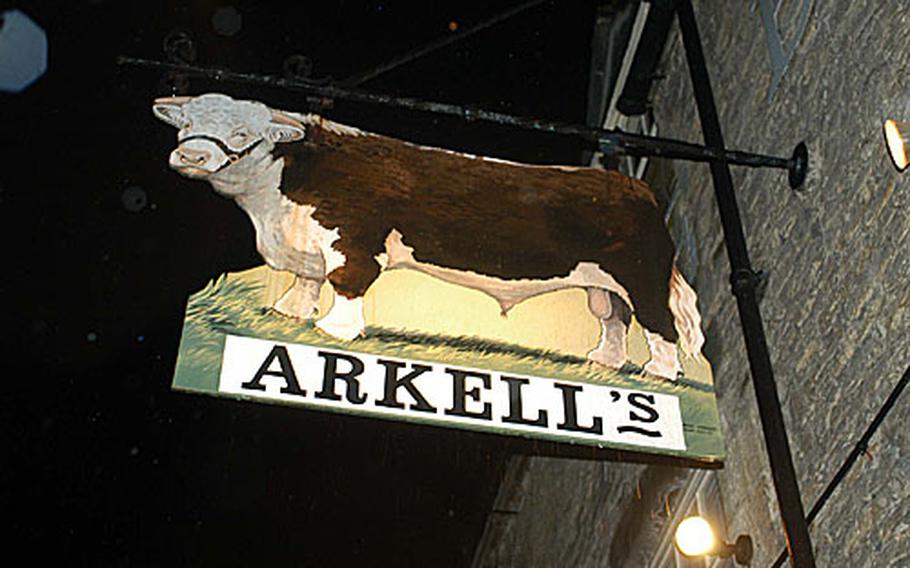 The sign hanging outside The Bull Hotel. Arkell&#39;s is the name of the brewery that owns the hotel and pub. (Bryan Mitchell / S&S) And so it is, or very well could be, at The Bull Hotel pub in the heart of Fairford&#8217;s historic district.

About a mile outside of RAF Fairford in western England, The Bull Hotel is a charming 15th-century stone building, home to a restaurant/pub where the service is surpassed only by the superstition.

The Bull Hotel bar manager Chrissie McDermott recently provided Stars and Stripes a behind-the-scenes tour of the former stable house-turned-local watering hole. It included enough specter references to keep even a hardened skeptic wondering if the spirit of Robert Stack and the &#8220;Unsolved Mysteries&#8221; crew were lurking around a dimly lit corner with a fog machine and that chilling soundtrack.

She said the supernatural occurrences don&#8217;t scare away potential patrons.

They also come for a pub menu that almost borders on the sublime. In short, the food&#8217;s delicious.

A few items from the menu that caught my fancy include chicken ham and garlic papadelle for 8.95 pounds ($18), steamed lamb with mint suet pudding for 9.95 pounds ($20) and homebaked honeydew ham with fresh chunky chips for 5.95 pounds ($12).

I dined on roast chicken basted in red sauce topped with noodles and some soft bread. It was good.

The bar offers a full range of beers as well as wine and, yes, spirits.

Sadly, it does not offer tours of the tunnel that connects the hotel with the nearby church. It was in these tunnels that the aforementioned monks traveled between Fairford&#8217;s most striking structures in the days before refrigerated kegs and ice-cold refreshment.

But you can stay above ground, and work off a can&#8217;t-miss dinner-and-pint combo with a relaxing stroll through what is certainly one of the most endearing villages within a stone&#8217;s throw of an Air Force installation.