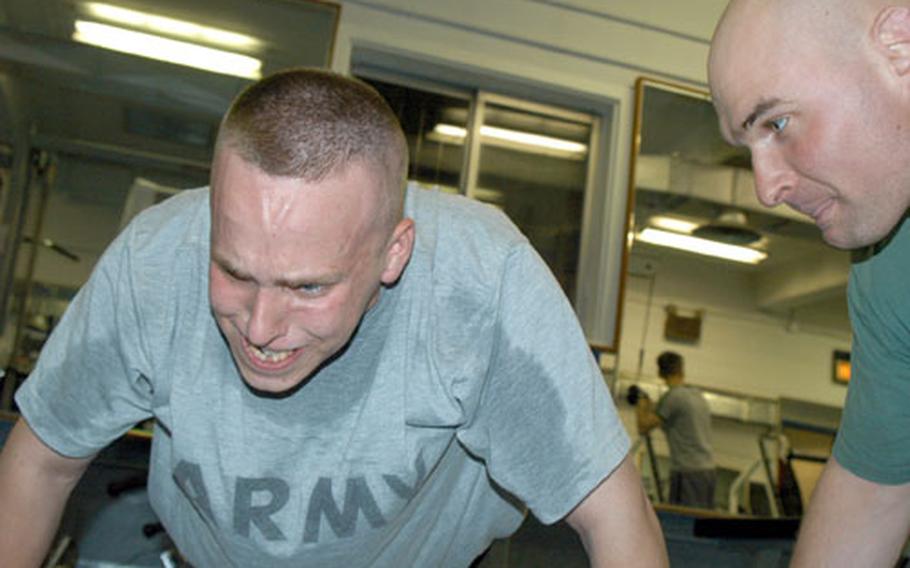 Pfc. Chris Robb shows the strain as he does push-ups under the watchful eye of Staff Sgt. Bryan Baker at the Camp Red Cloud gym. (Seth Robson / S&S)

Pfc. Chris Robb shows the strain as he does push-ups under the watchful eye of Staff Sgt. Bryan Baker at the Camp Red Cloud gym. (Seth Robson / S&S) 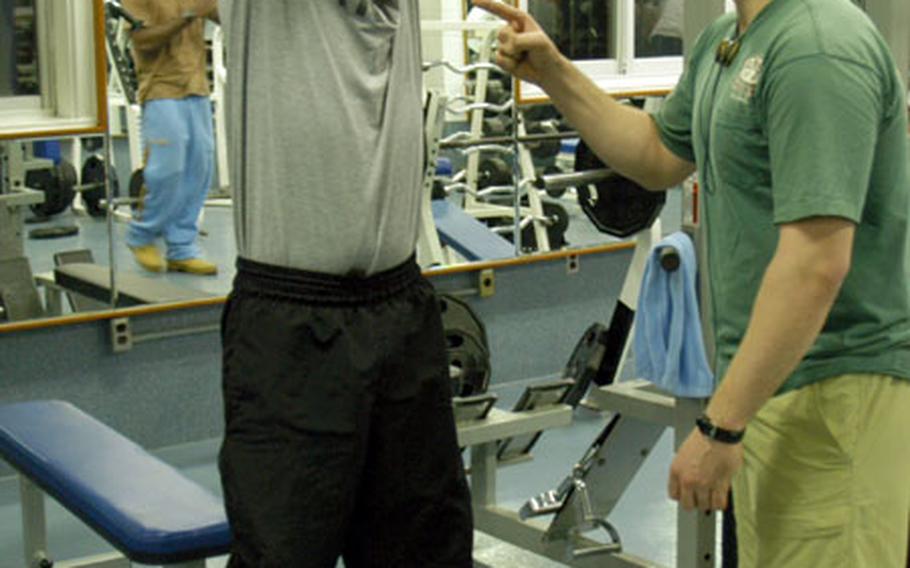 The young infantryman, serving at Camp Red Cloud with the Headquarters and Headquarters Company, already is reasonably fit by civilian standards. But he failed an Army fitness test in late December that required him to run two miles in less than 15 minutes and 54 seconds, then complete 42 push-ups and 52 sit-ups in less than two minutes.

The result? A month of extra physical training leading up to the next fitness test Jan. 22.

During the holidays, normally a time of over-indulgence in food and drink, Robb &#8212; the only one who failed the late December test &#8212; worked out three hours a day. It&#8217;s a regimen that will continue until he passes the fitness test.

All the extra workouts left little time for holiday revelry.

Atop the soldiers&#8217; usual early morning physical training (sessions involving anything from tae kwon do workouts to cross-country running) is a grueling daily two-hour gym session.

These sessions are designed to boost upper-body strength and endurance. The fitness test&#8217;s push-up component was the only area Robb failed, for instance.

The most challenging exercise for Robb is the hanging crunch, he said.

A typical hanging crunch workout might be most familiar to history buffs &#8212; specifically, those who&#8217;ve read up on medieval torture sessions.

You start out by hanging by the arms from two slings attached to a chin-up bar, then alternately lift each knee up to the chest, as if you are treading water. Or, you raise both at the same time and hold them, hanging in a sitting position.

At first, Robb&#8217;s movements are precise and his face only shows a mild expression of discomfort.

Soon the leg-lifts become labored and beads of sweat appear on Robb&#8217;s forehead. By the time the session is half over, his expression is pure torment and at the end he is hanging from the straps, completely exhausted.

But Staff Sgt. Bryan Baker, who looks as if he spends a lot of time in the gym, and is acting as Robb&#8217;s personal trainer, likes the exercise.

After four sets of hanging crunches, Robb moved on to push-ups, which appeared just as painful. At first his technique was perfect but by the time he&#8217;d been at it for a minute, his arms barely could support his body, which was contorted in pain as he struggled to lift himself from the floor.

Baker said physical fitness is vital for an infantryman.

&#8220;It is an occupation which is more physically demanding. You need to be fit to be able to fight on to an objective and complete the mission and make it out alive,&#8221; he said.