After combat, wedding is Army reservist's next big ‘shindig’ 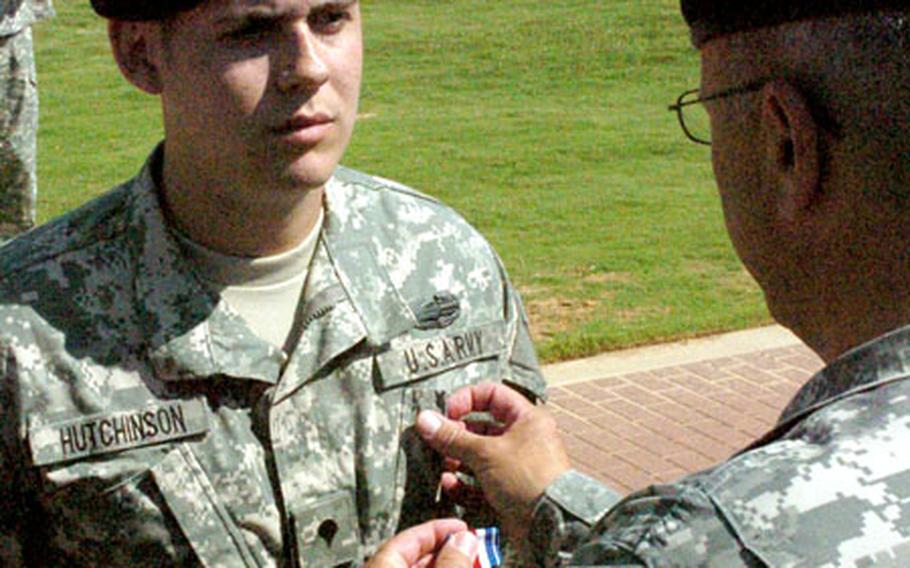 Spc. David Hutchinson receives a Silver Star during a ceremony June 6 in College Station, Texas. The Army said that the reservist’s heroism during and after his convoy was ambushed in Afghanistan in May 2008 was the primary reason all 17 soldiers in the convoy survived. (Courtesy of U.S. Army)

Spc. David Hutchinson receives a Silver Star during a ceremony June 6 in College Station, Texas. The Army said that the reservist’s heroism during and after his convoy was ambushed in Afghanistan in May 2008 was the primary reason all 17 soldiers in the convoy survived. (Courtesy of U.S. Army) 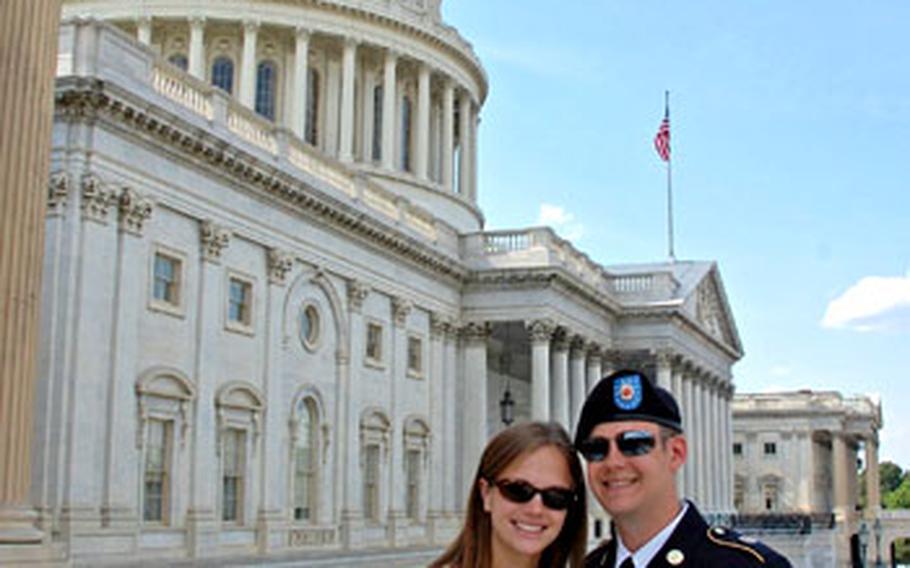 Spc. David Hutchinson and his fiancée, Jenny Becker, on a recent visit to the U.S. Capitol. Hutchinson was in town as one of a group of military heroes invited to a July 4 celebration at the White House. (Kathie Scarrah / U.S. Army)

Spc. David Hutchinson celebrated the Fourth of July munching food and watching fireworks on the White House lawn, one of a select group of war heroes invited as guests of President Barack Obama.

A month earlier, he&#8217;d stood chin up and shoulders back on the drill field at Texas A&M University and became only the fifth Army reservist to receive the Silver Star. But neither of those once-in-a-lifetime honors will qualify as the highlight of his summer. On Saturday, the 22-year-old will wed Jenny Becker in front of more than 250 guests.

In May 2008, after nearly three years in the Reserve but barely four days in Afghanistan, Hutchinson came under intense fire as his convoy tried to negotiate a winding mountain pass. Only the turret shield separated him from swarms of insurgents on the surrounding ridges.

In awarding Hutchinson the Silver Star, the Army said his actions during the firefight were the biggest reason that he and 16 other soldiers emerged from that "kill zone" with their lives. At least five insurgents died on those ridges.

Hutchinson had arrived at Forward Operating Base Sharana a day earlier. A member of the 420th Engineer Brigade, he was there as part of a security detail for brigade commander Brig. Gen. Paul Crandall, now a major general. The mission on May 21 was essentially a test run. Joined by two soldiers from the departing brigade, 15 members of the security detail were to drive from Sharana two hours to FOB Orgun-E. Then they were to turn around and come home.

The brigade Hutchinson&#8217;s unit was replacing had not been attacked during 12 months in the area. "It was supposed to be a there-and-back kind of deal, just getting acquainted with the local surroundings and what the terrain was like," Hutchinson said. "We got our intel brief and everything was supposed to be just gravy."

But about an hour into the trip, the soldiers in the four-Humvee convoy started to notice strange activity. Hutchinson, manning the MK19 grenade launcher in the third Humvee, saw Afghans move behind rocks as the convoy passed. A local man dialed his cell phone.

The convoy crossed a wadi and the road began to curve as it climbed uphill into a pass. All four Humvees were exposed and vulnerable. The first shots came from the gunner in the first vehicle, who opened up with his .50 caliber.

"Five or 10 seconds later," Hutchinson said, "all these insurgents just started popping up from all different varying heights on that ridge from the top to the bottom."

Rocket-propelled grenades flew at the Humvee, one whizzing across the hood inches from the driver. In the turret, Hutchinson began firing. He scanned the ridge on the passenger side of the vehicle. Wherever he saw the most muzzle flashes, that&#8217;s where he sent his grenades. He destroyed a machine gun nest and silenced other insurgents directing small-arms fire at the convoy.

He had nearly expended his ammo can when two RPGs ripped through the right rear quarter panel of his Humvee. Hutchinson blacked out and collapsed into the vehicle.

Coming to, he counted his limbs and had them all. He tried to return to the turret, but his legs were numb.

First Sgt. David Gussberry, also in the Humvee, was worse off. He&#8217;d been sprayed with shrapnel, was bloodied and barely conscious. "He kind of looked like a horror movie," Hutchinson said. "He was pretty torn up at that point."

Hutchinson began first aid, and shouted to the truck commander that it was time to go. A rendezvous was arranged with a medevac team. "There wasn&#8217;t a window that didn&#8217;t have a bullet hole in it or a tire that wasn&#8217;t flat," Hutchinson said, but they made it.

Medics arrived quickly to treat Gussberry and Hutchinson, who by that time had regained feeling in his lower body only to discover that the back of his right leg had been perforated by burning shrapnel. Loaded onto the only available litter, Hutchinson climbed off and told medics to load up Gussberry. He hobbled to the helicopter with the help of another soldier. Within minutes, they were at FOB Orgun-E. Within days, they were at Landstuhl Regional Medical Center in Germany. Later, they shared a flight back to the States.

Each had undergone multiple surgeries. Gussberry had shrapnel removed from his brain. He faced a long recovery, but he was his wise-cracking self on the plane, Hutchinson recalled.

Marble-sized shrapnel in Hutchinson&#8217;s leg had lodged against his femur, damaging nerves running down his calf. He spent six months at Brooke Army Medical Center in San Antonio, gradually reaching the point where he could walk without a cane. Today, he says he can jog short distances &#8212; more than doctors predicted he&#8217;d ever do. The pain comes if he walks for extended periods. He doesn&#8217;t know if it&#8217;ll get better.

Initially, he felt robbed of the chance to serve with the soldiers he&#8217;d grown close to as they trained for a 12-month stint in Afghanistan. He only got four days. But he stayed in touch. Eventually, they all came home, too. "We&#8217;ll go back to our training and wait for our turn again in a couple years," Hutchinson said.

For now, he plans on settling into married life. They&#8217;ll move into their new apartment in College Station soon after returning from the honeymoon. He&#8217;ll go back to work as a retail salesman for AT&T. She&#8217;ll study nutrition in graduate school.

But first things first: The wedding.