After battling injuries, DODDS for 3 years, teacher moves on 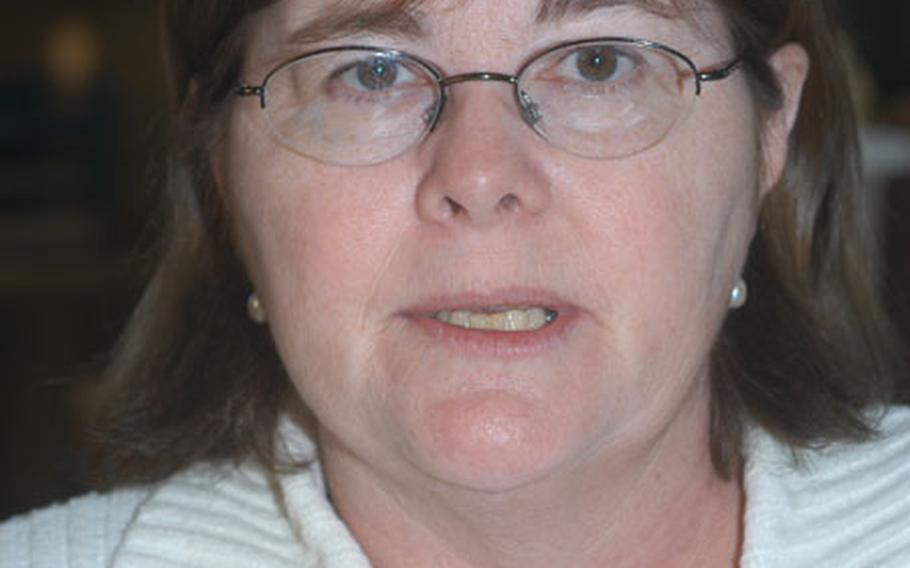 Sala Chapman suffered serious injuries in a car accident three years ago that have hindered her career as a teacher. (Ron Jensen / S&S)

The car crossed over the center line to pass a slow-moving truck one dark English winter morning and crashed head-on into the hopes and dreams of Sala Chapman.

But Chapman, known as Sally, knew none of this at the time. She simply woke up in a hospital with horrific injuries.

Bones in her right leg were broken, as was her sternum. Her collarbone was dislocated. Her head had slammed against the steering wheel, causing brain damage.

&#8220;I have no memories of the incident except the night before the accident,&#8221; Chapman said.

The accident happened on Dec. 11, 1999. Since then, life and work has been a struggle for Chapman, 52, a teacher with the Department of Defense Dependents Schools since 1992.

She has battled her injuries and her employer, making some progress against the former, but little against the latter.

A few weeks ago, she raised the white flag of surrender and returned to the States.

Her body aches when she stands for long periods of time and her memory has never fully recovered. She couldn&#8217;t remember the names of her students at Lakenheath Middle School at RAF Feltwell, England, where she was a science teacher.

She has taken a one-year medical leave of absence from her teaching career, which will probably end in early retirement. She has little hope that her efforts to recover worker&#8217;s compensation funds will be successful. Likewise, she doubts any litigation against DODDS for not placing her in a non-classroom position will bear fruit.

Things were going well before the accident, caused by an uninsured driver on the narrow, winding road that links RAF Feltwell with RAF Lakenheath.

Teaching for DODDS had changed Chapman&#8217;s life. She was divorced and jobless with three children living with her mother in Virginia when she was hired to teach high school biology at Misawa, Japan.

She was a popular teacher. Jim Moody, who taught at the elementary school on base at the same time Chapman was at the high school, had high praise for the impact she had on his daughter.

&#8220;Laura considers Sally one of her most inspirational teachers in high school,&#8221; he said in an e-mail in response to questions.

Laura Moody will soon graduate from Duke University with a degree in chemistry, her father said.

&#8220;Laura credits Sally Chapman as the key inspirational figure in her chosen career,&#8221; he said. &#8220;We appreciate all that Sally did to make such a positive influence on our daughter and only wish that our son could have also had her as a teacher.&#8221;

Chapman moved to England five years ago to teach science at the middle school. She was buying a house that she hoped would be her retirement home.

But the accident changed those plans. She was without a paycheck for most of the rest of that school year. Her worker&#8217;s compensation claim was rejected because, she was told, she was not on school business at the time.

She says that is not true, that she was driving to a weekend science club gathering. She has appealed that decision.

She has asked DODDS to give her positions outside of the classroom, such as science coordinator. Twice she has applied for the positions, twice she has been denied.

Chapman argues that the Americans with Disabilities Act required DODDS to give her the job she wanted and she is seeking an Equal Employment Opportunity ruling.

Frank O&#8217;Gara, spokesman for DODDS in Europe, said he could not discuss particulars of Chapman&#8217;s case because of ongoing litigation.

However, he said, the act cited by Chapman does not give preference for jobs to people with disabilities.

All of this has worn on Chapman. Because of lost wages during her recovery, she lost her house, selling it at a great loss.

She survived the accident, but very nearly did not survive the recovery. She has thoughts of suicide, especially during the gloomy English winters, she said.

Some colleagues and supervisors have been wonderful to her, she said. Others have not.

She leaves DODDS and Europe, she said, disillusioned with the organization that helped her pull her life together.

She is certain now she will never get a non-classroom job with DODDS. She is not so certain the litigation for compensation will end in her favor.

She has turned her thoughts to renewing her acquaintance with her daughter, Anna, 19. Anna, too, will be able to help her mother cope with the daily pain and the memory lapses.

Asked about the other driver, the uninsured young American woman who tried to pass that truck, Chapman shrugged and said, &#8220;She left the country.&#8221;