After attack, Iraqi police stand up to insurgents 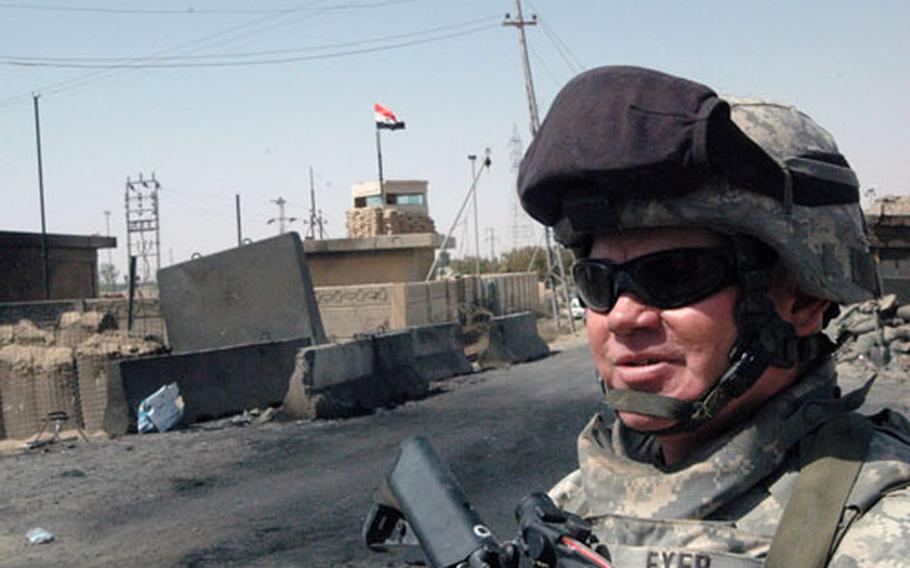 Command Sgt. Maj. Michael P. Eyer stands outside an Iraqi police station that was attacked by insurgents on Aug. 21. Eyer, 51, had just left the compound minutes before the suicide bomber detonated his vehicle. (Monte Morin / S&S)

Command Sgt. Maj. Michael P. Eyer stands outside an Iraqi police station that was attacked by insurgents on Aug. 21. Eyer, 51, had just left the compound minutes before the suicide bomber detonated his vehicle. (Monte Morin / S&S) 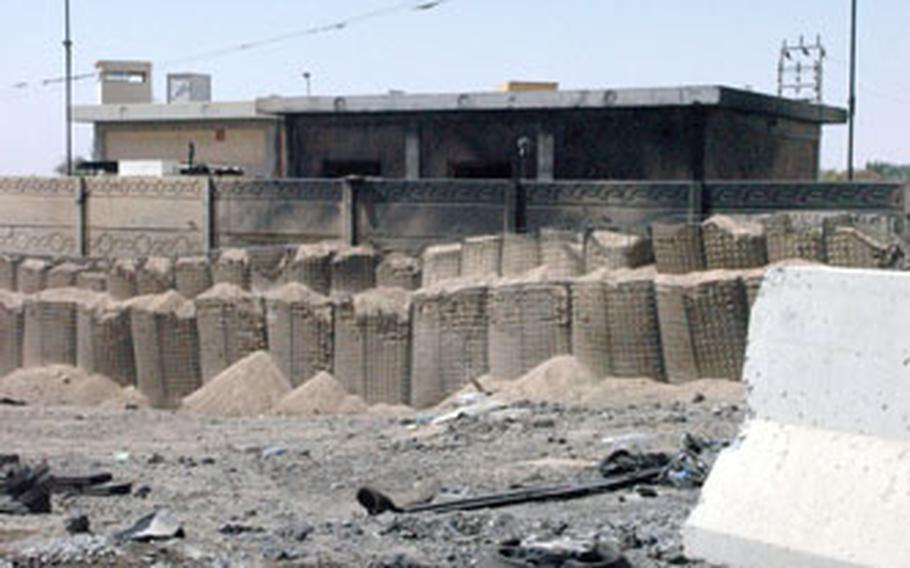 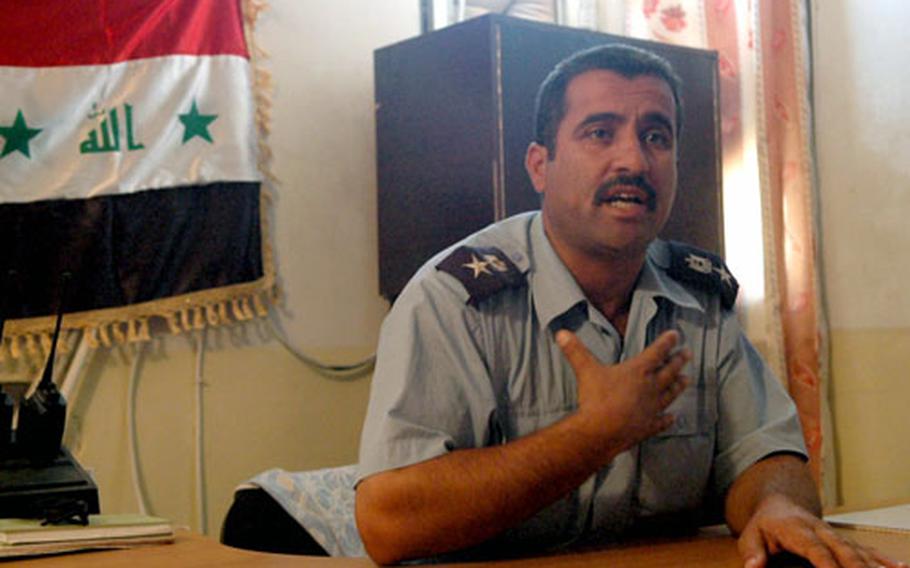 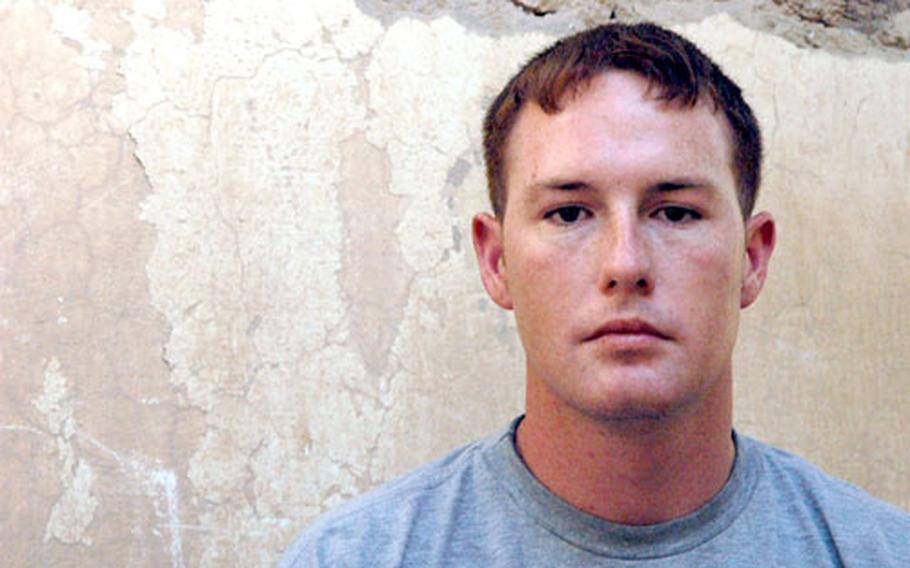 Sgt. Eric Baker, 24, of Wauchula, Fla., suffered second- and third-degree burns to his right arm and burns to the back of his head and neck during a car bomb attack on an Iraqi police station near Ramadi recently. (Monte Morin / S&S)

CAMP BLUE DIAMOND, Iraq &#8212; It was a fiery message from insurgents to the farming tribes north of Ramadi: Either quit building an Iraqi police force or die.

The communication came in the form of an explosives-laden dump truck that was detonated on the doorstep of a newly built Iraqi police station in the lush, canal-veined Jazirah region of Anbar province. The truck, which featured a new and chilling design, directed an enormous channel of flames over the station&#8217;s walls and into the tiny compound.

Next, insurgents gunned down the patriarch of the Abu Ali Jassim tribe &#8212; the clan that makes up much of the area&#8217;s new police force. The sheik had just left a meeting in which he tried to enlist the cooperation of other area tribes, when he, his son and a bodyguard were executed at an insurgent roadblock.

The attacks, which occurred on Aug. 21, are typical of the tactics used by insurgents to intimidate Iraqis and sabotage hopes of a new democracy. While similar assaults have triggered the collapse of entire Iraqi police and Iraqi army units, U.S. military commanders and advisers here say they were shocked by the response of Iraqi police in Jazirah.

Instead of fleeing, officers refused to budge. They even declined to take refuge at Camp Blue Diamond. Within hours of the attack, police officers raised a new Iraqi flag on their station&#8217;s scorched flagstaff and set about repairing the outpost.

&#8220;I was shocked and proud at the same time,&#8221; said U.S. Army Sgt. Eric Baker, a police transition team leader who was himself injured in the noontime attack.

The police station falls within a 400-square-kilometer swath of territory patrolled by the Baumholder, Germany-based 1st Battalion, 6th Infantry Regiment, 2nd Brigade, 1st Armored Division, or Task Force 1-6. The area is considered by U.S. commanders to be a &#8220;bedroom community&#8221; for those terror cell leaders who plan, fund and supply insurgent attacks in nearby Ramadi.

While a percentage of tribes in the Sunni Arab region have responded coolly to U.S. invitations to join the police force, or have actively taken up arms against coalition forces, the Jassim and Abu Diyaab tribes have answered the call with particular enthusiasm.

On Wednesday, the commander of the station said the attack had only strengthened their resolve to fight the insurgents.

The attack killed an Iraqi police officer as well as a civilian motorist in a truck behind the suicide bomber. Dozens more suffered light to serious injuries.

A military police officer with the Wiesbaden, Germany-based 501st Military Police Company, Baker is currently attached to the 1-6. He said he was standing in the open, within the walled compound, when he was deafened by an explosion.

The 24-year-old Wauchula, Fla., native said he thought the compound was being mortared and took a knee. When he looked up however, he was shocked to see an orange wall of flames heading directly for him. Baker turned away from the blast and felt the flames sweep over his back, neck and head.

He began sprinting from the flames when he felt himself lifted by an invisible force and thrown some five feet into a pile of burning debris. From there, he scrambled into a nearby building while the flames subsided and then helped evacuate the compound and treat casualties.

Hours after the attack, U.S. troops monitoring surveillance feeds &#8212; from manned aircraft whose whose movements were coordinated by a joint terminal attack controller &#8212; located an individual they believe may have been involved in the construction of the truck and captured him.

Efforts by U.S. troops to constitute an Iraqi police force suffered an enormous blow in January, when a suicide bomber killed more than 40 Iraqis and two U.S. personnel during a recruitment drive at a Ramadi glass factory. Not long after that, insurgents followed with the assassination of seven tribal sheiks who had been talking with U.S. forces about ways to increase security in the province.

Yet, even despite the terror campaign, Iraqis continue to enlist in the police force. A recent provincial recruiting drew more than 500 volunteers, all of whom were immediately transported to the Iraqi Police Academy in Baghdad.

Their enthusiasm for serving in the police force is explained partially by a desire to offset the presence of Shiite Muslim soldiers in the Iraqi army, but also by a desire to honor those family members and friends who have been killed by insurgents, police officers say.