After all the anxiety, Russia's Zapad exercise ends without provocation 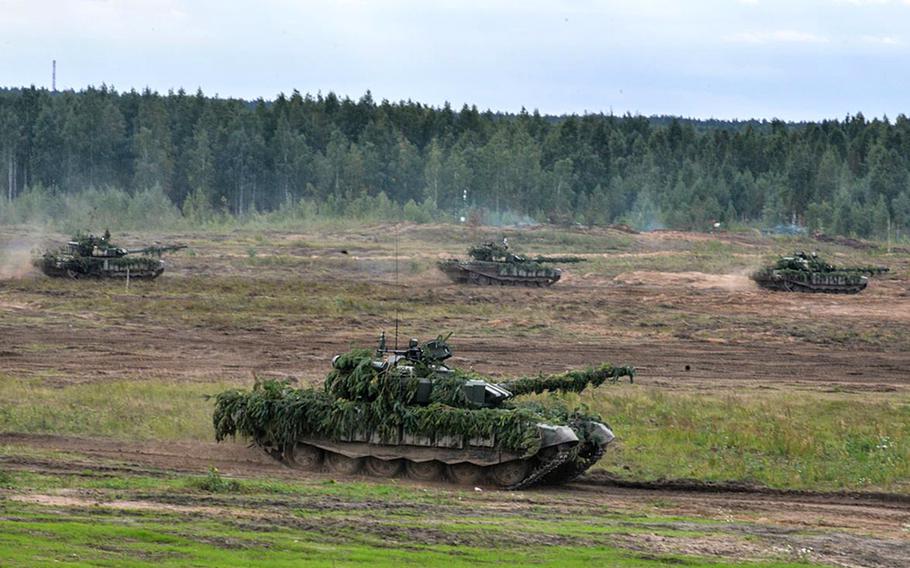 The Russian military on Wednesday concluded its much-hyped Zapad exercise, which provoked months of hand-wringing among Western officials concerned about thousands of troops conducting war games near NATO territory.

But as the drills ended, there was no sign of overt mischief by Russian forces mobilized for a week of exercises in Belarus and the Russian mainland.

Kremlin spokesman Dmitry Peskov told reporters in Moscow that Western angst, particularly among leaders in the Baltics, was overblown.

“Quite many international observers have visited the drills, there was a briefing for them where they could receive thorough information regarding the goals and aims of the drills, and they also had the opportunity to see with their own eyes that the drills’ scenario was consistent with the declared goals,” Peskov said Wednesday.

In the lead-up to Zapad, which means “west” in Russian, allies were skeptical of Russia’s assertion that the war games would involve just under 13,000 troops. Past Zapad exercises have been much larger, and some in the West anticipated as many as 100,000 troops would participate in drills in Belarus and Russia.

NATO said it will take weeks to complete a full assessment of Zapad, but the alliance said Russia’s exercise was far more elaborate than the counterterrorism scenario Moscow said it would be conducting.

In addition to Belarus and Kaliningrad, NATO said concurrent exercises extended from the Abkhazia region of Georgia up to the Arctic as Russia rehearsed a large state-on-state conflict.

“Based on our assessment, tens of thousands of troops exercised during ZAPAD, significantly exceeding the Vienna Document threshold for notification and observation,” said Oana Lungescu, a NATO spokeswoman, referring to international rules that regulate military exercises.

Lukasz Kulesa, a security analyst with the European Leadership Network’s Warsaw office, also said indicators suggest a larger event than Russia advertised, with parallel exercises by a wide range of units, as some analysts had expected.

“It’s not the biggest exercises in decades but definitely more than 12,700 soldiers announced,” Kulesa said.

The exercises “also simulated a wide-ranged and high-tempo conflict with U.S.-led NATO, not a counterinsurgency operation,” Kulesa said. “So while not headline-grabbing, the exercises will unfortunately add to the existing tensions in Europe.”

Baltic allies were particularly fearful that Russia could use the exercise as cover for probing NATO territory. The U.S. dispatched 600 paratroopers to the region as a precaution.

Lithuanian President Dalia Grybauskaite spoke of her region’s fears at a meeting of the U.N. General Assembly on Tuesday.

“Even as we speak, around 100,000 Russian troops are engaged in offensive military exercise Zapad 2017 on the borders of the Baltic states, Poland and even in the Arctic,” she said. “The Kremlin is rehearsing aggressive scenarios against its neighbors, training its army to attack the West.”

But as the training unfolded, Western and Russian accounts of portions of the drills depicted a muscular yet largely conventional military exercise not much different from major events held by the U.S.-led NATO alliance.

The Zapad exercises involved everything from ground troops and warships to fighter planes and the launching of Russia’s Iskander missile, which hit a faraway target in Kazakhstan.

The weeklong exercises concluded at a training ground in Belarus, where Russian and Belarusian troops maneuvered against an invading force and launched a counteroffensive “until the enemy’s complete defeat,” Russian media reported.

“The exercise was held in accordance with the approved scenario, the goals set have been achieved and the issues of training addressed with good quality,” Lukanshenko was quoted as saying by Russian media.

While Zapad serves to showcase Russia’s ability to defend Belarus, a scenario in which NATO would seek to invade the country is far-fetched, analysts say.

“The irony is that Russia and NATO are both exercising to deter each other from seizing countries that neither is appreciably interested in,” wrote Russia expert Michael Kofman in an analysis on the website War on the Rocks.

Some analysts say the larger threat posed by Moscow is unconventional tactics that fall short of direct military confrontation, such as disinformation campaigns that seek to undermine governments or provoke civil unrest.

In Lithuania and other countries on Russia’s border, those fears are especially acute.

“The Kremlin’s arsenal does not stop at conventional weapon. Russia continues to meddle in elections of other states, conducts cyberattacks and uses its ‘sputniks’ to spread fake news and destabilizing propaganda,” Grybauskaite said.

“Sputnik” means satellite in Russian; it is also the name of a Russian government news agency.