After a tour in Europe, many servicemembers find it difficult to get back into the American swing of things 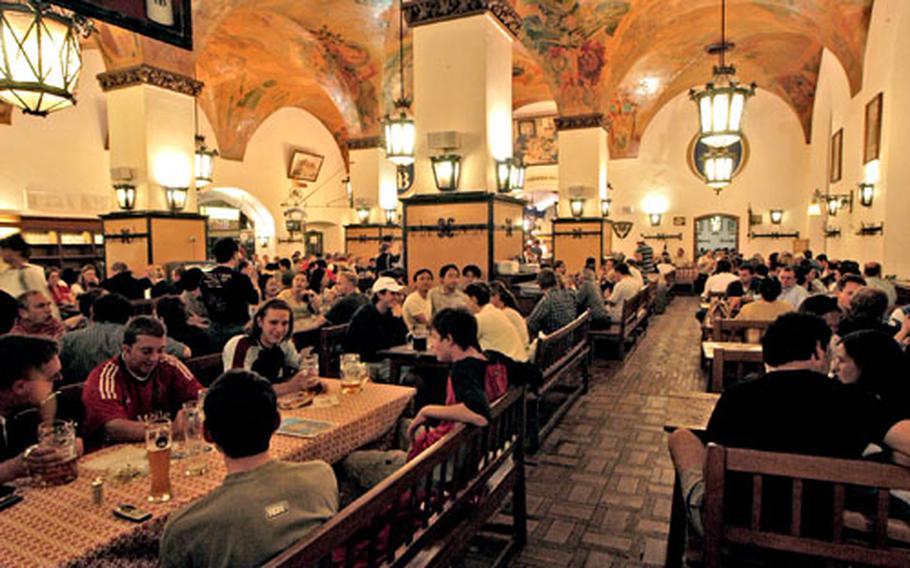 Visitors drink beer from 1-liter mugs at the famed HofbrŠuhaus in Munich, Germany. From the rules of the road to the alcohol content of European beer to the legal drinking age itself, the particular customs of a country can become so engrained people forget how things are back in the U.S. (Michael Abrams / S&S file photo)

Visitors drink beer from 1-liter mugs at the famed HofbrŠuhaus in Munich, Germany. From the rules of the road to the alcohol content of European beer to the legal drinking age itself, the particular customs of a country can become so engrained people forget how things are back in the U.S. (Michael Abrams / S&S file photo) 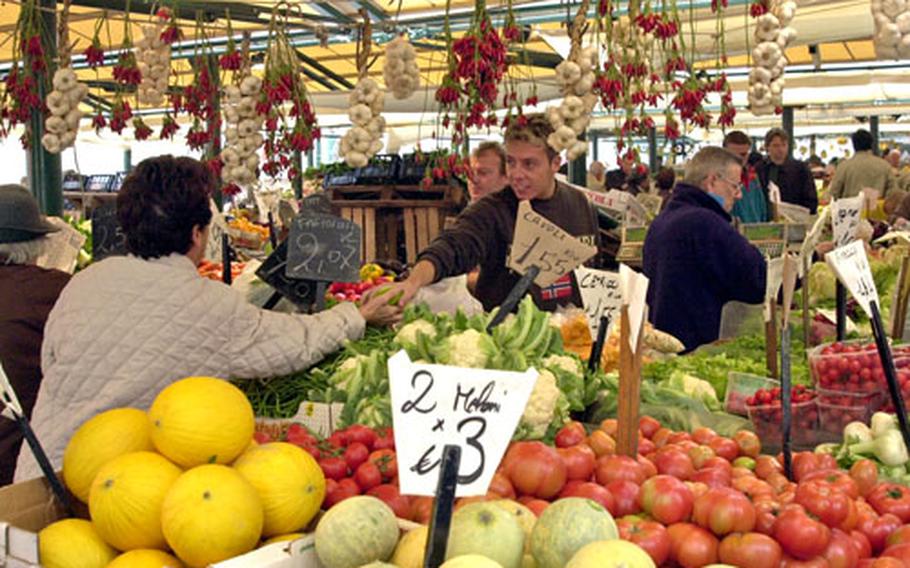 At first, the language barrier can make off-base shopping shopping for food, like at this market in Italy, intimidating. When it is time to return to the U.S., it is these simple things of European life that one can miss. (Michael Abrams / S&S file photo)

Tech. Sgt. David Jones stood in the condiment aisle of a Texas grocery store a good 10 minutes staring, a bit dazed, at the seemingly endless rows of ketchup.

He finally decided on a brand.

Jones had just arrived on temporary duty from Ramstein Air Base, Germany, where shopping at the commissary and even German supermarkets had never presented such a selection of anything, much less ketchup.

From the moment Jones stepped off the plane in Dallas, he felt disoriented in his own country. The garish billboards and sprawling car dealerships around the Dallas airport &#8212; and that first trip to the supermarket &#8212; sent Jones for a loop.

"It was seriously overwhelming," said the Dayton, Ohio, native, who has been stationed in Europe for eight of the past 13 years and now works at RAF Upwood in England. "I forgot how to use the phone in the States. I forgot how the gas pumps worked. I couldn&#8217;t even rent a car in Dallas because I didn&#8217;t have a credit card because you pay cash for most everything in Germany."

Jones had been jolted by culture shock when he first moved overseas in 1999. When he returned to the States after a few years abroad, he felt similarly disoriented. It was culture shock, in reverse.

For many, that first posting overseas is punctuated by the awe and adventure of new cultures, languages and customs. It can be an emotional roller coaster, one most people expect moving to a different country.

But what catches many off-guard is the period of readjustment when returning home &#8212; for good or just a visit.

"People are probably more concerned about moving overseas than returning. They assume that&#8217;s an easy thing to do," said David Smith, a sociology professor at the University of California, Irvine, and co-editor of the academic journal, Contemporary Sociology.

Even with the great lengths the U.S. military goes to provide a bit of home to troops and civilians stationed overseas &#8212; with American Forces Network and the pipeline of U.S. goods streaming into installations around the world &#8212; going back to the real thing can be difficult, Smith said.

Many describe life in Europe as more relaxed, a little slower. Smith said the societal differences stem from the economy.

Americans tend to be overworked and more money-driven than Europeans, he said.

Even American medical care is dog-eat-dog.

Most European nations fund extensive socialized medical programs with taxpayer dollars while the U.S. industry is highly privatized and funded by the beneficiaries themselves.

The differences clearly influence perceptions and ways of life on both sides of the pond, "but I see it less as a cultural thing and more as a reaction to our economy that makes the U.S. seem more fast-paced and competitive than the rest of the world," Smith said.

Smith&#8217;s theory may explain why adjusting to life in Europe can be difficult even for the most open-minded Americans and vice versa.

With time, though, the social nuances and customs that distinguish Americans and Europeans often subside, allowing many Americans to get so comfortable in Europe that they forget what it&#8217;s like back home.

"People get accustomed to other cultures so easily that when they go back to their own country it can be just as difficult as when they got overseas," said Kent Thompson, an Army Community Services specialist at U.S. Army Garrison Vicenza in Italy. "There is a reverse culture shock."

Each branch of the military tries to help ease the transition for servicemembers on the move. Services vary at each base, but some relocation advisers focus specifically on getting people ready to move from Europe back to the United States.

At a workshop earlier this year in Darmstadt, Germany, Thompson reminded soldiers of "the little things" they would need to readjust to upon returning. Those accustomed to the rules of the road in their host countries, the alcohol content of European beer &#8212; and the lower legal drinking age itself &#8212; have to relearn what it&#8217;s like back in the U.S.

"My wife can&#8217;t just go walking in the woods alone at night like she does now," said Burgado, 52, an installation manager at USAG Darmstadt.

There are those who never return.

They simply don&#8217;t want to surrender driving home past ancient castles, or eating mussels fresh from the Mediterranean, or volksmarching through the German countryside, or boating along the Turkish coastline. Living overseas is simply too rich an experience to leave.

Bob Barlow, a civilian employee at RAF Lakenheath, said he and his family aren&#8217;t planning to return to the States anytime soon &#8212; but are not necessarily committed to living in Europe forever. Barlow&#8217;s family has called England home since a failed stateside move from Germany in 2003.

"We got to Georgia and it was like, &#8216;Is that it?&#8217; So my wife found a job with the Air Force and we moved to England," said Barlow, a retired Army chief warrant officer who lived in Germany a total of 11 years with his wife, who also retired from the Army, and their daughter.

He has no interest in going through that reverse culture shock again.

"Overseas I seem to be more contented, more satisfied than in the U.S.," Barlow said.

Dealing with decompressionThose who adjusted best and were the most successful overseas usually experience the greatest amount of difficulty with reverse culture shock. Here are a few tips to ease the adjustment.

Anticipate the stress you will likely feel when returning to the United StatesDecompress. Give yourself time to think about your time overseas and reflect on the experience before jumping back into the swing of things, if possible.Think about how the U.S. and your world view has changed during your absence.Maintain contacts with friends overseas.Reach out to local organizations that focus on your host country.Source: American University

See a version of this story from Stripes&#39; Pacific edition here.

Americans living abroad often adapt to their host country by picking up the traditions and customs of those countries. Here are a few of the etiquette differences in European countries:

Quiet time is usually is observed all day Sunday and between 1 p.m. and 3 p.m and from 9 p.m. to 7 a.m. the rest of the week. And forget about shopping on Sunday, everything but restaurants are closed.Orderliness and punctuality are paramount in German society, so follow the rules and don&#8217;t be late.Italy

Appearances matter in Italy. The concept of &#8216;bella figura&#8217; or good image is important to Italians, who often judge people on their attire.Greetings are enthusiastic but formal. Once a relationship develops, kissing on both cheeks along with a pat on the back between men is standard.Spain

Shops close for siestas between 2 p.m. until about 5 p.m. and then stay open until about 9 p.m.Spanish meal times are about two hours later than traditional times Americans eat. Most restaurants don&#8217;t open until 8 p.m.Turkey

Although Islam is the country&#8217;s predominant religion, the Turkish government is secular.Turks often use the term &#8216;efendim&#8217; (literally &#8216;my master&#8217;) as a polite way to address people they do not know. You may hear this from waiters, taxi drivers or shop staff.United Kingdom

Driving on the other side of the road is often the biggest adjustment for people when first arriving.The pub culture dominates the social scene. Whether you&#8217;re after a drink or a meal, the ubiquitous pub will usually present the most options.The Netherlands