After a long goodbye, 4-3 ADA cases its colors 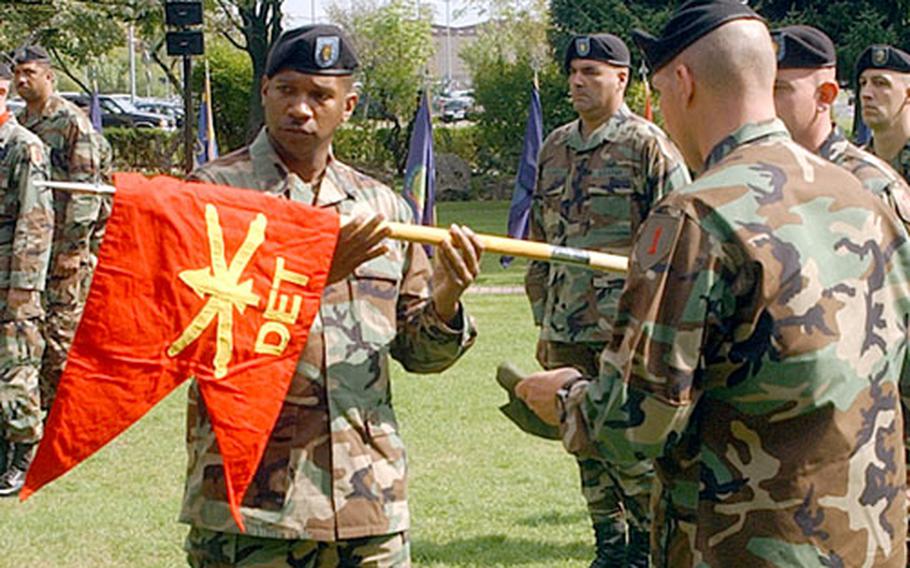 Addison&#8217;s served too long to change jobs, and his chances of promotion have shrunk to nil. So he&#8217;ll leave the service.

The 4-3 ADA cased its colors Thursday in a solemn ceremony at W&#252;rzburg, the headquarters of the 1st Infantry Division. The unit is the first battalion-sized piece of the Big Red One to disappear.

The battalion&#8217;s demise is part of a long-planned restructuring of its Patriot and Avenger missile-defense units, which are needed in fewer numbers since the end of the Cold War.

The unit&#8217;s leadership learned in April 2004 that the 4-3 ADA would be dissolved shortly after it returned from Iraq.

After 45 days of &#8220;reintegration&#8221; and block leave, the unit returned to an enormous task: reassigning more than 500 soldiers, many of them into new jobs, and turning in more than 10,000 pieces of gear, from tents to trucks.

More than 200 soldiers not only needed new duty stations, they needed to be reclassified into new career tracks. Many became military police officers, transportation or water purification experts, even cavalry scouts.

Two dozen of the unit&#8217;s officers and soldiers will form the 1st ID&#8217;s new Air and Missile Defense detachment, which stood up Thursday at the same ceremony under Labadini&#8217;s command.

Labadini said the detachment will include 10 vehicles and two Sentinel radar systems, which will let the 1st ID keep its early-warning and airspace-management functions.

But the division no longer will have its own air defense artillery guns. If it needs them, it will borrow them from ADA task-force brigades being created at Fort Bliss, Texas.

Closing up shop has been a busy, bumpy time for the soldiers and families of the 4-3 ADA. Keeping busy has lessened the pain of loss.

The 4th Battalion, 3rd Air Defense Artillery Regiment is gone, but it&#8217;s leaving something behind.

While in Iraq, Capt. Alex Diefenbach, 27, the unit&#8217;s personnel officer, created what has grown into perhaps the largest soldier-sponsored relief effort in the country: the Iraqi Children Assistance Network, or Operation ICAN (www.operationican.com).

Begun in his hometown of Midland, Mich., the project uses a growing network of individuals, churches and civic groups across the U.S. and Germany to donate toys and school supplies for Iraqi children.

Diefenbach said the organization now supplies 4,000 schools across the four provinces of northern Iraq patrolled last year by 1st ID through. The last time he checked, Operation ICAN had gathered 4,000 tons of supplies.