After 60 years, WWII battle flag back in Japan 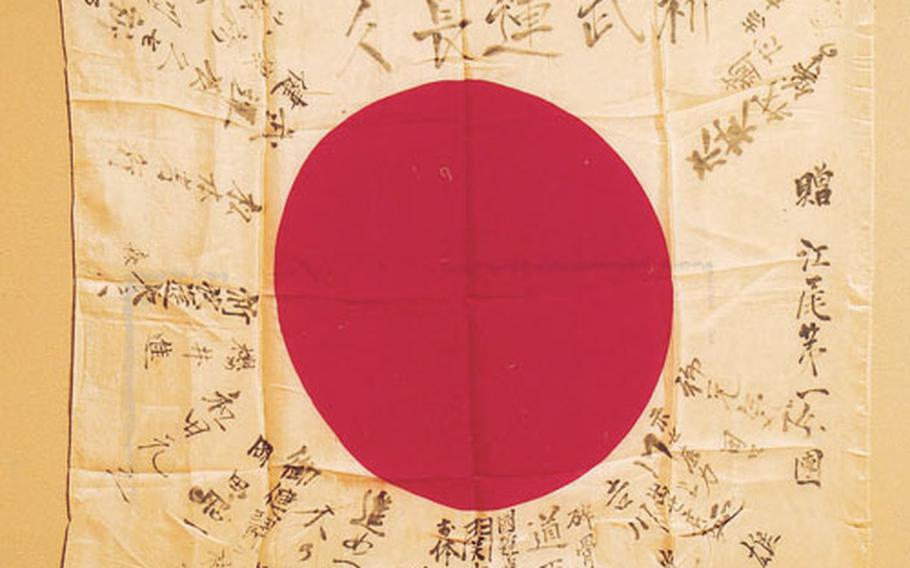 A Japanese battle flag taken as a World War II memento by Robert Walsh was returned to the people who signed it in Ebi. It says, “We pray that you fight fiercely and have long-lasting luck,” and “Go forward and fight fiercely.” (Courtesy of Sadakichi Kojima)

A Japanese battle flag taken as a World War II memento by Robert Walsh was returned to the people who signed it in Ebi. It says, “We pray that you fight fiercely and have long-lasting luck,” and “Go forward and fight fiercely.” (Courtesy of Sadakichi Kojima) 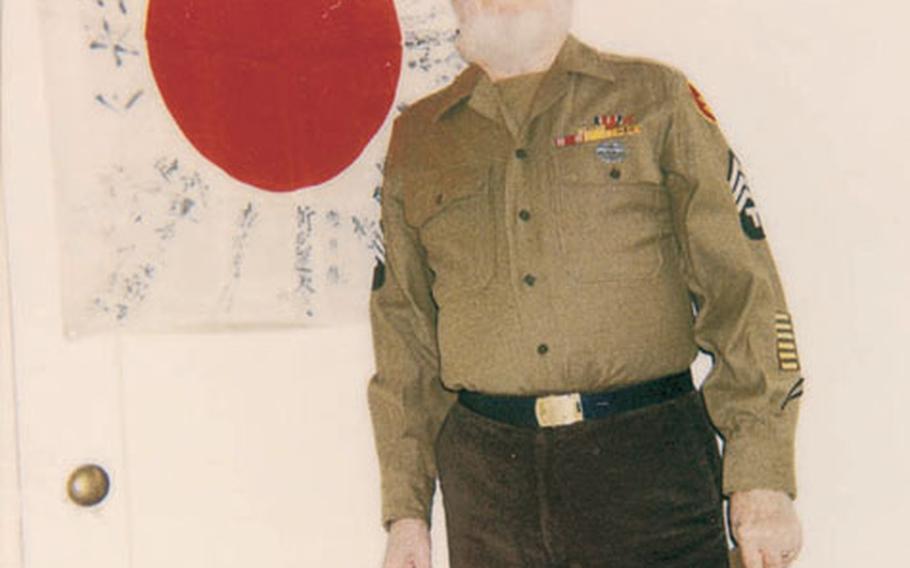 Former Army combat medic Robert H. Walsh poses in front of the Japanese battle flag which was recently returned to its hometown. (Courtesy of Sadakichi Kojima) 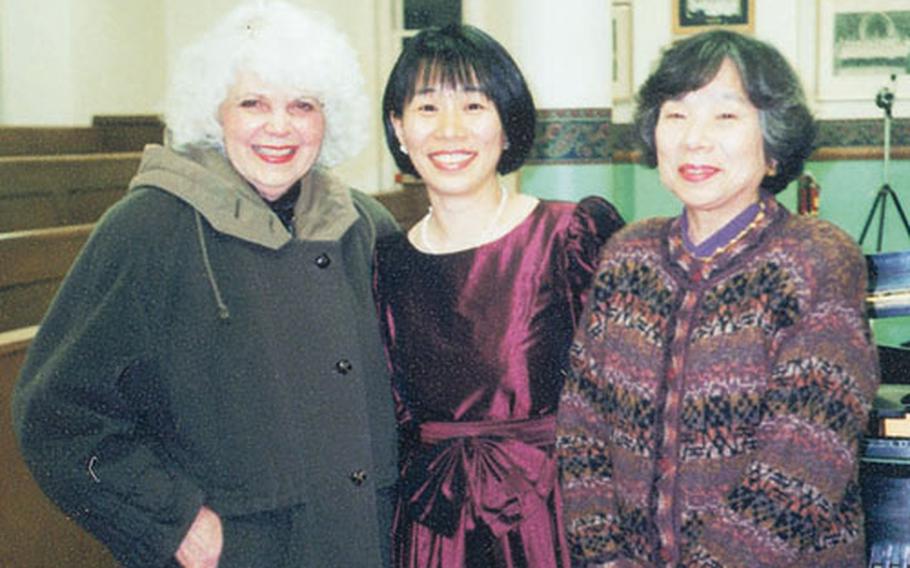 Naoko Caller, in center, helped the Japanese battle flag return to its hometown in Tottori prefecture. (Courtesy of Sadakichi Kojima) 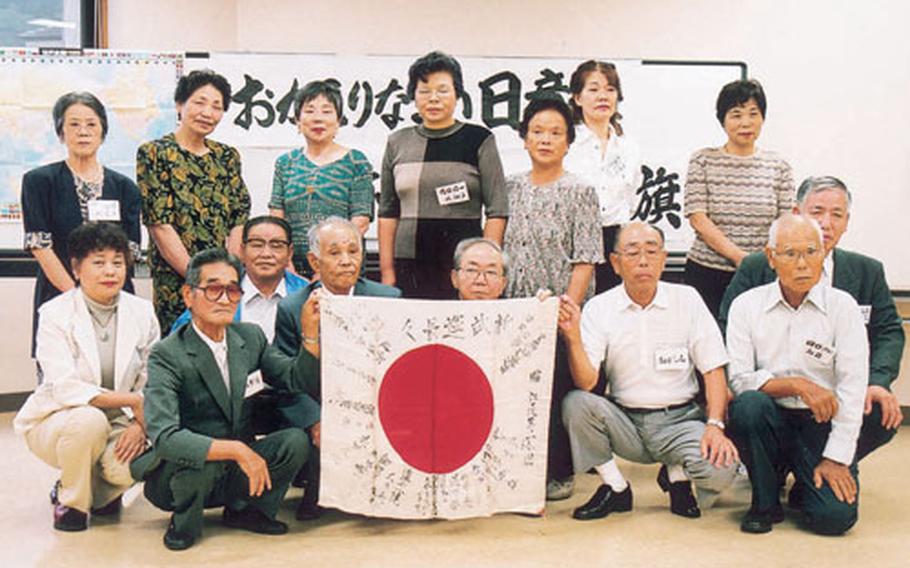 People who signed the Japanese battle flag along with family members and the town mayor gather around the flag after it was returned to them last week. (Courtesy of Sadakichi Kojima)

The odyssey of a World War II Japanese battle flag taken to America from a Far East battlefield is over.

Four of the 16 people who signed the flag more than 60 years ago gathered for an emotion-filled ceremony this month at a restaurant in Kofu, in southwestern Japan&#8217;s Tottori Prefecture. Also attending were 10 family members of residents who originally signed the flag.

Such flags traditionally were given to Japanese Imperial Army soldiers going off to war. Former U.S. Army combat medic Robert Walsh acquired this one while in the South Pacific &#8212; either the Philippines or Guadacanal, two of several Pacific locales where he saw battle between 1942 and 1945, said his cousin, William Grimes Jr., of Allentown, Pa.

Grimes said Walsh, who died of leukemia in 1996 at age 78, took the flag home to the Bronx, N.Y., after his 1945 discharge, displaying it for a time on his apartment wall. Following Walsh&#8217;s death, Grimes decided the flag should return to Japan.

At Lehigh University in Bethlehem, Pa., Grimes gave the flag to student Naoko Cauller, who offered to bring it to Japan. She presented it to Sadakichi Kojima, a friend of her aunt, in 1999.

It would take most of those four years to find the community where the flag&#8217;s journey began.

&#8220;I thought the owner would be found much earlier,&#8221; said Kojima, a photography professor in Yokohama, Japan, who spearheaded the search for the flag&#8217;s origin. Because the flag bore the names of neither the prefecture it came from, the soldier it was given to, nor his unit&#8217;s identity, the search took that much longer, he said.

The flag&#8217;s origin came into focus earlier this year after Japanese newspaper Yomiuri Shimbun published a story about it and the signatures it bore. Kojima was contacted by Kofu residents, and he sent them a photo of the flag.

A former schoolteacher contacted Hirohisa Kawakami, 59, an Ebi area resident, after the article appeared in the newspaper. The teacher taught in Ebi about 1955 and recognized the name &#8220;Ebi&#8221; written on the flag.

Kaoru Michishita, 77, said he signed the flag when he was a teenager living in Ebi, a Kofu subdivision. He is one of six still alive among those who signed the flag with good-luck wishes for the unknown soldier who carried it into battle.

&#8220;I couldn&#8217;t believe to hear about the flag after 60 some years. When my acquaintance sent me a copy of the article posted on the Web site, I was surprised to see the familiar name&#8221; on the flag, said Michishita.

Kawakami also discovered the flag bore the name of his brother, who died in the Philippines while he was in Japan&#8217;s navy.

Kazutomi Taguchi, 78, another resident who signed the flag, lauded Walsh&#8217;s custody of the wartime artifact.

&#8220;At the time we were taught that the Americans and the British are brutal but when I learned the flag was stored by a good-willed person, I keenly realized that we are both human beings,&#8221; he said.

Plans call for the flag to be framed and displayed in Kofu&#8217;s history and folk museum following an annual memorial service for the war dead in mid-November.