After 38 years of Air Force service, Hobbins to retire 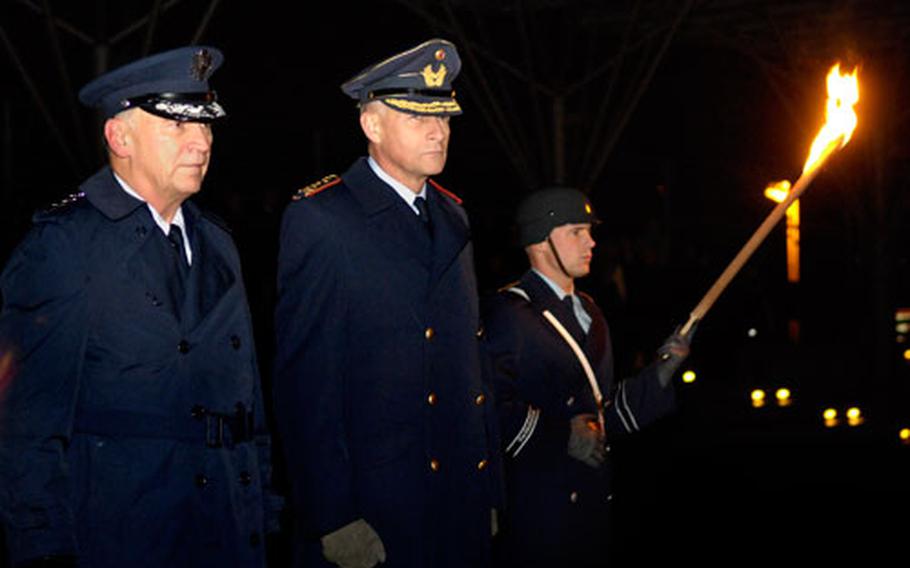 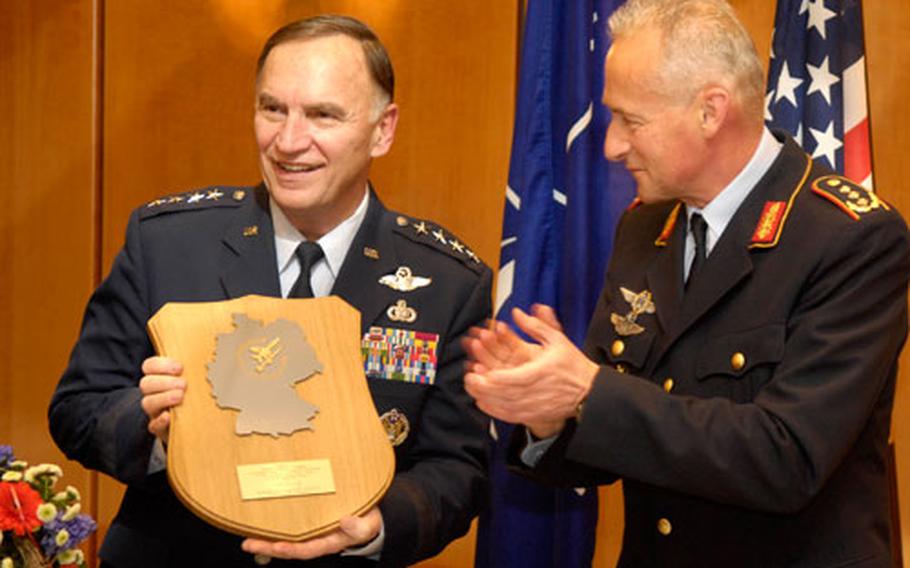 Hobbins shows off a gift presented by Stieglitz. Following the reception, Hobbins was honored during a formal Grand Tattoo ceremony performed by the German military band escorted by military service member formations and torchbearers. Hobbins is retiring Monday after serving in his current position since Dec. 2005. (Ben Bloker / S&S) RAMSTEIN AIR BASE, Germany &#8212; Decades before he became a four-star Air Force general, when he was just a boy in elementary school, Tom Hobbins knew exactly want he wanted to do when he grew up.

He wanted to fly planes.

As the son of a B-17 flight engineer, military aviation ran in his blood. But a book called &#8220;Jet Pilot&#8221; that he read in school is what called him to the cockpit before he could legally drive a car.

He went on to become an Air Force fighter pilot and log an astonishing 5,100-plus flight hours in a military career that would span 38 years. But last Tuesday, he flew what very well could be his last in a fighter jet.

While flying has been both his passion and job, he calls his two years as the commander of U.S. Air Forces in Europe and NATO&#8217;s Air Component Command his &#8220;crowning achievement.&#8221;

The Air Force will hold a retirement ceremony Monday at Ramstein to bid farewell to a commander who preached about building relationships with foreign militaries and pushed commands to find ways to become more efficient in the face of major personnel cuts and deployments.

Just as Army and Navy top commanders have encouraged stronger relationships with countries in Africa and Eastern Europe, Hobbins has pushed for airmen to forge bonds with air forces in other countries. The command includes 39,000 active-duty, reserve, Air National Guard and civilian employees.

In the past year, airmen from Europe visited more than 63 countries, mostly for training and humanitarian missions. Teams from various career fields also have made numerous trips to Africa on missions, from opening an HIV testing center in Botswana to providing medical care in Ghana.

&#8220;They make a difference in their lives and they come back all pumped up,&#8221; Hobbins said. &#8220;And the people we see have a little different impression of the United States and, of course, the United States Air Force as a result.&#8221;

But that&#8217;s not to say that his tenure has not been without its challenges. The Air Force has cut thousands of airmen worldwide as part of an effort to save money for new planes and equipment. USAFE lost nearly 3,500 airmen as part of the reductions. About 3,000 spots have been slashed in just the past year, Hobbins said.

While the number of airmen has gone down, the number of commitments and deployments has not. To do more with less, Hobbins has nudged wings and commands to do things more efficiently. The Air Force calls the initiative Smart Ops 21.

Although it is not without its skeptics, Hobbins said the program has been able to save money and help reduce the time airmen spent performing the mission. When he first arrived on the job, airmen were working an average of 51 hours a week. Attempts to get it down to the initial goal of 40 hours a week fell short, but Hobbins said overtime has been cut and airmen aren&#8217;t working weekends as they did in the past.

He said his greatest disappointment is not being able to get Ramstein&#8217;s mall and hotel complex finished. The building was supposed to open when Hobbins arrived at USAFE, but the project has been beset with problems and delays.

The Kaiserslautern Military Community Center, or KMCC, has no completion date. He said there is &#8220;nothing more important&#8221; than opening the facility.

Hobbins entered the Air Force in 1969, before many of his airmen were born. He said in an earlier interview that he paid his way through college by playing in a band. He earned a bachelor&#8217;s in business finance at the University of Colorado before joining the military. He has five children. Two of his sons are in the Air Force.

Joining Hobbins at his retirement ceremony will be his wife, Robbin. She also will be honored at the ceremony for her hours of volunteer work at Landstuhl Regional Medical Center. She is the European coordinator for Sew Much Comfort, an organization that stitches together clothing for people with combat injuries.

While Hobbins will retire on Monday, his replacement has not yet been approved. Lt. Gen. Roger A. Brady has been nominated to take Hobbins&#8217; place, but Congress still has to sign off on it.

If approved, Brady likely would take over sometime in early January.