After 37 years in uniform, Army veteran turns eye to politics Iuniasolua Savusa, who served as the top enlisted soldier for U.S. Army Europe, the U.S. and NATO commands in Afghanistan and the U.S. Pacific Command during his 37-year Army career, is running for office in his native American Samoa. Savusa is running for lieutenant governor. He&#39;s running with the only female candidate, Salu Hunkin-Finau. (Courtesy Salu and Savusa 2012 ca)

Iuniasolua Savusa, who served as the top enlisted soldier for U.S. Army Europe, the U.S. and NATO commands in Afghanistan and the U.S. Pacific Command during his 37-year Army career, is running for office in his native American Samoa. Savusa is running for lieutenant governor. He&#39;s running with the only female candidate, Salu Hunkin-Finau. (Courtesy Salu and Savusa 2012 ca) 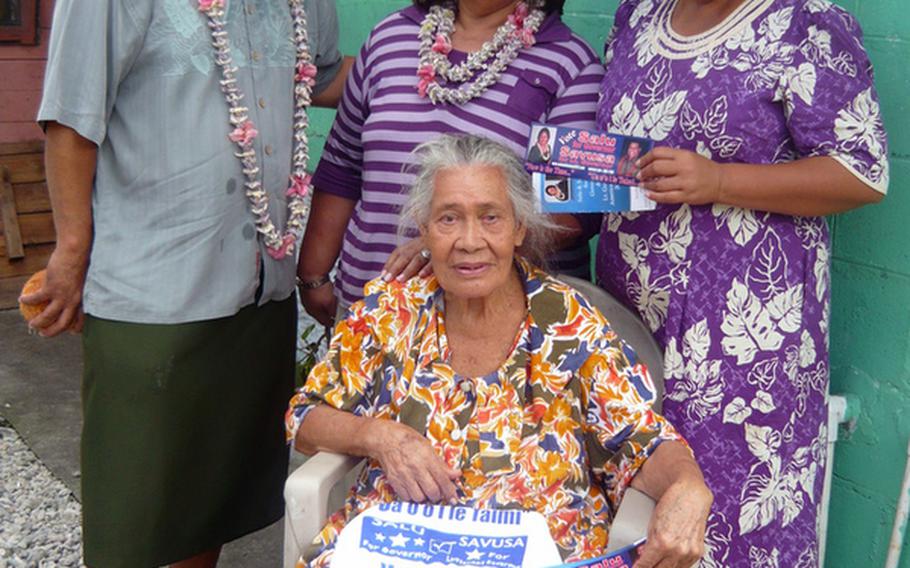 Iuniasolua Savusa, who served as the top enlisted soldier for U.S. Army Europe, the U.S. and NATO commands in Afghanistan and the U.S. Pacific Command during his 37-year Army career, is running for office in his native American Samoa. Savusa is running for lieutenant governor. He&#39;s running with the only female candidate, Salu Hunkin-Finau, second from left. (Courtesy Salu and Savusa 2012 ca) He&rsquo;d worn it for almost 37 years, with its wall of medals, badges, ribbons and tabs testimony to his career: decades as an infantry soldier, an Army Ranger, whose four combat tours found him lobbing grenades in Iraq and making helicopter landings under fire in Afghanistan.

He relaxed for three days. Then he put on a skirt and got back to work.

Not just any skirt &mdash; a lava-lava.

A lava-lava is a traditional garment sort of like a kilt worn in American Samoa, the U.S. territory in the South Pacific that Savusa left as a 17-year-old to make his way in the world.

In the Army, Savusa excelled. He was a scout platoon leader, Ranger school honor graduate, drill sergeant, first sergeant, air assault instructor and jumpmaster. He served as command sergeant major for deployed airborne and air assault infantry units before becoming the top enlisted soldier for U.S. Army Europe, the U.S. and NATO commands in Afghanistan and the U.S. Pacific Command.

Now Savusa, 54, is running to be American Samoa&rsquo;s lieutenant governor. Wearing the lava-lava goes with the job.

Five candidates are vying to be elected governor Nov. 6 in the nonpartisan race which, due to term limits, is without an incumbent.

Savusa is running with the only female candidate.

He had declined previous offers while on active duty from two other prospective gubernatorial candidates, both men, to join their tickets.

&ldquo;I was not impressed,&rdquo; Savusa said in a recent phone interview, conducted in a car at 10 p.m. American Samoa time after a day of campaigning. &ldquo;They were running for what they wanted to do and forgetting the people.&rdquo;

Then, on the fourth day of his retirement, Salu Hunkin-Finau asked him if he&rsquo;d be her running mate. She&rsquo;s a former president of the American Samoa Community College who holds a doctorate in education, is the mother of 10 and, according to her website, was a dancer in an Elvis Presley movie.

The land is held communally; villages are headed by male chiefs. Samoans, converted to Christianity in the 1800s by missionaries, remain religious and generally believe the Biblical teaching that wives must obey their husbands.

Savusa took a different view of women&rsquo;s roles early on, he said, one that was expanded by his decades in the Army.

His grandmother and mother, a correctional officer, were forceful leaders behind the scenes, he said. &ldquo;They were independent, involved and strong-minded women when it came to family, churches and village decisions.&rdquo;

Then, in the Army, watching women perform in leadership positions with the same success as men reinforced his beliefs, he said.

Of Hunkin-Finau, he said: &ldquo;Given her qualifications and the challenge of having a woman as the lead on this ticket, I gladly answered yes.

&ldquo;The culture, I believe, is going to change.&rdquo;

Hunkin-Finau is the sister of American Samoa&rsquo;s nonvoting delegate to the U.S. House of Representatives, Eni Faleomavaega, with whom Savusa has long been acquainted.

After the campaign started in February, Savusa was asked at a news conference why he would run with a woman &mdash; something everybody wanted to know, according to an account from the Samoa News.

&ldquo;Why am I running with a woman? I don&rsquo;t see a woman in this lady. I see a leader,&rdquo; he replied.

&ldquo;I want our people to think &mdash; if you have daughters, think about their future. Your daughters are going to grow up someday &mdash; why not them? Why can&rsquo;t they lead?&rdquo; Savusa said.

American Samoa, about the size of Washington, D.C., with a population of 55,000, is the poorest of any U.S. territory. The unemployment rate is upward of 30 percent, according to the CIA Factbook. Most private-sector jobs are found in the one remaining tuna cannery, where workers, after a law that increased their pay, earn a little more than half the U.S. minimum wage. Further wage increases were put on hold after the other tuna cannery shut down.

The territory, with a warrior culture that honors its ancestors, has long been an attractive recruiting ground for the U.S. military. American Samoa, per capita, had the highest casualty rate in the Iraq War of any U.S. state or territory.

The territory gets much of its funding from the U.S. government. But Savusa said the problem was not lack of funds but poor state management of them.

&ldquo;Our school system is in shambles. Our students can&rsquo;t pass a written test on English comprehension,&rdquo; Savusa said. Samoan is the primary language, he said, but English is taught from the earliest grades.

A high percentage can&rsquo;t pass the test to get into the military, he said. &ldquo;These kids have to take it over and over. It&rsquo;s shameful. I had no problem passing tests to go into the Army or to go to college.&rdquo;

Some 38 percent of Samoan recruits were waivered into the services in 2006 after failing the test, the Chicago Tribune reported.

&ldquo;We&rsquo;re driving on roads full of potholes while I&rsquo;m talking,&rdquo; Savusa continued. &ldquo;It&rsquo;s been this way for years. It&rsquo;s one of the most beautiful places in the world and it&rsquo;s just sad that we can&rsquo;t take care of our own people. It&rsquo;s Leadership 101.&rdquo;

Savusa developed his leadership skills in the Army. His combat exploits are many, and documented.

An &ldquo;imposing slab of Samoan muscle&rdquo; who stayed cool under fire, he led troops by example, according to a book about Operation Anaconda in 2002, one of the largest battles in Afghanistan, in which eight U.S. troops were killed and more than 80 injured.

In 2003, Savusa ended an ambush near Hillah, Iraq.

&ldquo;Enemy gunfire peppered the convoy. Bullets could be heard whizzing past, pinging off vehicles,&rdquo; according to a story by an embedded Scripps Howard reporter.

Savusa, in a vehicle in the middle of the convoy, moved forward toward the bullets coming from behind a line of trees, where he directed his troops to shoot.

He grabbed a grenade, &ldquo;walked out into the open within about 30 yards of the treeline and lobbed the grenade,&rdquo; the story said. When the dust settled, two Iraqi fighters lay dead in a makeshift bunker.

Savusa might have pursued a more lucrative post-Army career, working for a defense contractor, for example. But that&rsquo;s not him.

&ldquo;I would rather wear a Kevlar and (body armor) and dodge bullets in the streets of Baghdad or in the hills of the Himalayas in Afghanistan than to be wearing a suit and tie in one of those corporate boardrooms,&rdquo; Savusa said in a 2008 talk to new sergeants in Bamberg, Germany.