After 33 years in the Navy, command master chief is taking his show on the road 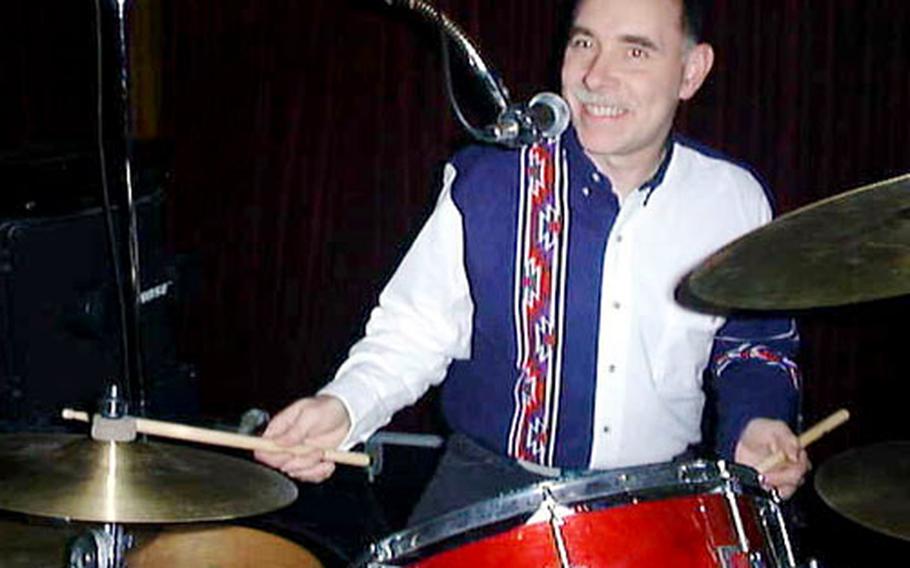 Command Master Chief Gary Bernhard was there, too &#8212; one gland lighter &#8212; but not due to the war on terror. His battle was with cancer.

&#8220;The entire ward was filled with Marines, Seabees and sailors who were missing limbs or blind,&#8221; remembers Bernhard, who retired Dec. 15 as the command master chief of Yokosuka&#8217;s Naval Telecommunications and Computer Station Far East. &#8220;I just lost a prostate. I couldn&#8217;t feel too badly about that.&#8221;

After his surgery, the gregarious Yokosuka Naval Base leader started paying ward social calls, carting his hospital machines behind him. Master Chief Petty Officer Austin Leedom, who witnessed Bernhard&#8217;s hallway visits, called him &#8220;the life of the party on that ward.&#8221;

But though Bernhard is a &#8220;comedian,&#8221; his illness was actually very serious, Leedom said.

Leedom currently works as a facilitator for the Afloat Training Group at Yokosuka Naval Base, but he met Bernhard on the E-9 selection boards in Millington, Tenn. They became friends at a bar after Leedom bought a drink for the &#8220;Monopoly Man,&#8221; a reference to Bernhard&#8217;s bald-head-and-mustache combination.

A sense of humor is imperative when it comes to some of his experiences, Bernhard said.

In his 33-year naval career, Bernhard had cancer twice. He made the rank of chief petty officer twice. And he developed his love of music to the point where he has his sights on becoming a country star when he leaves Japan in April.

Bernhard joined the Navy in 1973 during Vietnam, but was diagnosed with seminoma, a type of testicular cancer, just five years later. The son of a Navy chief petty officer, Bernhard was treated in the same hospital he was born in &#8212; Naval Medical Center Portsmouth, Va.

But he balked when the Navy wanted to medically retire him from active duty in 1979, he said. Bernhard went before the medical board, fought it and won.

Bernhard said his wife Patricia was very supportive. But he was shaken by the fact that he couldn&#8217;t biologically father children. So he asked to be stationed in South Korea, where adoptions were common. They adopted their daughter, Jennifer, in 1983 when she was five days old.

Tragedy struck in 1987 when Bernhard&#8217;s father was diagnosed with leukemia. Bernhard left active duty and became a reservist to care for his dad until he passed away. As a chief petty officer, he was recalled in 1990 for Operation Desert Storm then returned to active duty in 1991 on the aircraft carrier USS Independence.

Problem was the Navy returned Bernhard to active duty as an E-6, so he had to make the rank of chief petty officer all over again.

With his wide grin and tropical shirts, Bernhard also is well-known out of uniform as a frequent emcee for the Liberty Loft, his all-night entertainment during the annual Relay for Life Cancer Walk and from the classic rock cover group &#8220;Waterfront.&#8221; Bernhard leads the band, playing drums and singing.

The gigs with his band led to meeting country singer Floyd VanLaningham, who offered Bernhard a job playing with his band in San Antonio after his retirement. VanLaningham&#8217;s band &#8212; with the addition of Bernhard &#8212; will play military bases in Japan this spring before Patricia retires from her government job and the couple moves to Texas.